Building for the future

If ever a team embodied the rugby league cliché of ‘a game of two halves', the Bulldogs of 2019 would fit the description to a tee.

Starting the year with three wins from their first 14 matches to seemingly have one hand on the wooden spoon, the absence of expectation over the second half of the season saw the blue and white's grow in confidence to finish as one of the form teams of the premiership.

Unable to settle on a consistent team for much of the early rounds due to poor form and injuries to key players, the mid-season acquisition of New Zealand captain Dallin Watene-Zelezniak created a cultural shift throughout the club, culminating in the side climbing off the bottom of the ladder to finish in 12th-position with ten wins from 24 matches.

Priding themselves on their ability to grind away at opponents for long stretches, a recurring shortcoming for Dean Pay's side was the ability to score points. Averaging 13.5 points per game to rank as the worst attacking side in the league, the Bulldogs scored two tries or less in 15 matches, while it took until the final round of the season for the side to crack 30 points in a match.

Heading into next season with a renewed sense of confidence and several shrewd purchases, the Bulldogs will be determined to start the new campaign strongly to give themselves every chance of qualifying for their first final series since 2016. 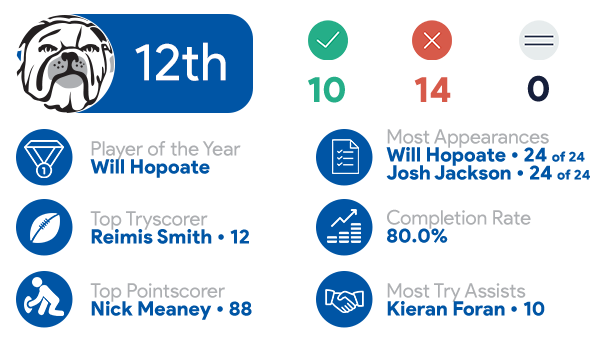 Anchored to the bottom of the premiership ladder at the midway point of the season, the absence of pressure after the transfer deadline saw the Bulldogs flourish with seven wins from their final ten matches. Proving to be more than nuisance value by upsetting the likes of South Sydney, Parramatta and Brisbane with classy performances, the side gained momentum with each passing result to become one of the form teams of the premiership without the burden of needing to win to stay in touch with the finals race.

While wins proved hard to come by during the early stages of 2019, the Bulldogs very rarely allowed opponents to bully them into submission. Holding a fair defensive record by conceding less than 20 points per game, Dean Pay's side were at their best in low scoring affairs that forced opponents to compete until the 80th minute. Using their defence to claim memorable victories over Newcastle and Parramatta on the road, along with pushing the Storm, Raiders and Roosters in gallant defeats, the Bulldogs willingness to compete saw supporters from across the league recognise the Western Sydney club as a side on the rise.

With the side still reeling from the salary cap hangover left by the previous administration, the lack of established attacking players saw the Bulldogs struggle to make a dent on the scoreboard. Scoring the fewest points of any Canterbury team in three decades, the side averaged just over two tries per game with an overreliance on speedster Reimis Smith who alone accounted for 12 of the side's 56 tries. Similarly, with Kieran Foran missing extended periods of the year, Jack Cogger and Lachlan Lewis struggled to assert the experience needed to dominate matches with the same consistency as the league's best playmakers.

As one of only two players to feature in every match for the Bulldogs in 2019, captain Josh Jackson made his presence felt with tremendous resilience and leadership under trying circumstances. Standing up with two of the plays of the season to deny Corey Oates with a Scott Sattler-esque tackle, along with consoling Paul Momirovski following a crucial missed conversion, the latter effort saw Jackson awarded the Provan-Summons medal for embodying the spirit of the game at the Dally M awards.

Handing three players their first grade debuts over the course of the year, Jayden Okunbor, Brandon Wakeham and Morgan Harper all showed signs of promise in limited game time. Averaging over 170 metres in ten matches on the wing, 22-year-old Okunbor gained plenty of admirers with his on-field efforts and appearance evoking memories of former Canterbury outside back Jamal Idris. Following on from a starring international debut for Fiji in the mid-year test, Wakeham featured three times in the halves, while Harper enjoyed a final round victory in his sole appearance in the top grade.

Lower Grades round up

Bowing out of the finals in straight sets after finishing the regular season in fourth position, the Bulldogs were unable to defend their reserve grade title in 2019. Coming away with 12 wins and a draw from 22 matches, a number of players featured in first grade throughout the year, while youngsters Kayne Kalache, James Roumanos and Elie El-Zakhem all represented Lebanon against Fiji in the mid-season test at Leichardt Oval.

Qualifying for the finals in sixth position with 11 wins and three draws from 20 matches, the Bulldogs Jersey Flegg team bowed out in the second week of the finals after conceding a late try against the Roosters.

Proving their wares as a team on the rise under the coaching of Dean Pay and on-field leadership of Josh Jackson, the Bulldogs loom as one of the biggest improvers and should press for a top eight finish.

Best lineup for next season