At the beginning of 2019 if you told the most one-eyed Sea Eagles supporter that their side would finish in the Top 8 and return to being a premiership force under the mercurial Des Hasler in his return to Brookvale, then go within minutes of making a preliminary final…all without superstar fullback Tom Trbrojevic for the majority of the season - the response may well have been…sure and the earth is flat and the sky is green!

Looking at the Sea Eagles roster on paper at the beginning of the season, they looked good things for battling it out for the dreaded Wooden Spoon and were not seriously considered finals material by the majority of pundits whose last names weren't Vautin or Fulton.

The Eagles however, were the undoubtedly surprise packets of the NRL with their captain Daly Cherry-Evans leading the way in general play, along with the dependable Jake Trbojevic and Martin Taupau leading a dynamic forward pack around the park. To compliment them, Des Hasler did what the mad scientist does and unearthed a host of unknowns in Reuben Garrick, Moses Suli, Jack Gosiewski and Corey Waddell who became household names among the Brookvale faithful in a short space of time. The Eagles turnaround this season was outstanding, with the side jumping from an ordinary 15th in 2018 to 5th in 2019, and now have fans looking forward to the 2020 season.

The Hasler era got off to a sloppy start, with superstar fullback Tom Trbojevic injuring a hamstring in the pre-season and the loss of their focal point in attack was felt immediately with Manly losing their opening two matches. Returning in Round 3, Trbojevic took just 10 minutes to score his maiden try of the season and simply destroyed the Warriors in Christchurch. He then helped his side hold on to defeat the Rabbitohs in Round 4. The win however came at a massive cost, with Trbojevic re-injuring his hamstring and missing the next 10 rounds. The Sea Eagles despite the massive blow of losing their prime attacking source, the side still managed to win 6 of these matches, including impressive wins over the Sharks and Knights away from home.

Manly made further ground during the Origin period, winning 4 out of 5 of their matches, including a huge win over the high flying Storm at AAMI Park, which announced the Eagles as serious contenders. Manly then raced home in the back half, highlighted by a morale boosting win over the Raiders in Canberra, with the fearsome front row combination of Taupau and Addin Fonua-Blake putting the competition on notice. The season then went into damage control in the penultimate round, with Tom Trbojevic going down again, this time with a pectoral injury which ended his season and seemingly Manly's just as they were looking to be a threat at the business end.

The Northern Beaches club limped into the finals in 6th position facing the Sharks at Lottoland. The Eagles then sprung to life at the right time, with blockbusting centre Moses Suli running amok to see the Eagles go through in their elimination final 28-16 winners. Des Hasler again had them flying under the radar against the highly fancied Bunnies, and the Sea Eagles looked to have them beat until a controversial Sin Bin on Jake Trbojevic with 10 minutes to go, saw Souths run in two late tries to end Manly's season in controversial circumstances. Despite this, it was a fantastic effort from the Eagles who are back in action after a few re-building years in the wilderness. 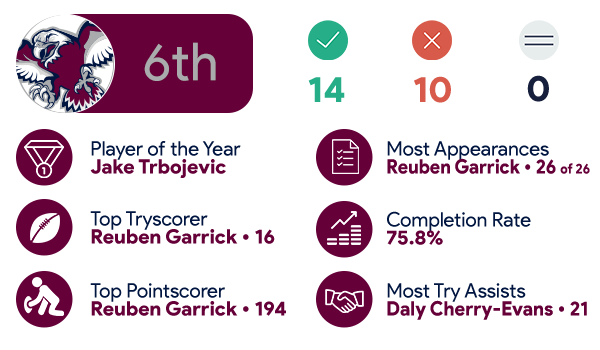 The Sea Eagles travelled down the Hume Highway in Round 23, where they took on the resurgent Raiders at GIO Stadium in Canberra. With a Top 4 spot on the line for both sides, the Raiders looked to be having things going their way leading 10-4, until Sea Eagles backrower Jack Gosiewski snatched an intercept off his own line and put rookie flyer Reuben Garrick away to score a runaway try. Replays then showed Garrick copped a knee in the back after scoring from Raiders centre Joey Leilua. The Eagles were awarded an 8 point try, which turned the match on its head giving the visitors a 12-10 buffer. Off the back of a dominant display from their middle men in Jake Trbojevic, Taupau and Addin Fonua-Blake, Daly Cherry-Evans to come to the fore, keeping his side in front in the latter stages to leave the Nation's Capital with a 18-14 victory. More importantly, the victory gave the team the belief that they were a contender for the 2019 title.

Manly's combinations were what worked for them in 2019. The four pronged attack of Tom Trbojevic, Dylan Walker, Cherry-Evans and Jake Trbojevic was sharp and saw the side finish fourth in the competition for line breaks. These core four players combined perfectly with a suite of modest outside backs, including veteran Jorge Taufua and Dragons reject Reuben Garrick who crossed for 16 tries for the season. Young gun Moses Suli also showed the NRL his potential, with the stocky centre finishing the year as one of the form players of the competition.

As mentioned, their front row combination of Taupau and Fonua-Blake was intimidating and the hooking combination of Koroisau and the very promising Manise Fainu was another threat that opposition sides struggled to contend with throughout the year.

Tom Trbojevic only playing 12 games for 10 wins and 2 losses. A pre-season injury cruelled his season before it began. Upon his return he was on fire, helping NSW take a historic second straight series win and producing some superb performances at Lottoland before his season ended with a pectoral injury against the Storm in Round 23. Had their biggest attacking threat played the full season, then the Eagles would have certainly finished higher on the ladder and could have really threatened for a Top 4 finish. If he stays on the pitch next year, then look out!

Jake Trbojevic was the first player since Glenn Stewart to take out the club's ‘Roy Bull Best and Fairest Award' for the third time and was again superb for the Eagles, NSW Blues and Australia in 2019. The older Trbojevic brother has become the heart and soul of the club, with the now decorated representative forward consistently giving his all week in week out. The Australian lock averaged 12 hit ups and 42 tackles a game, with a tackle efficiency of 93%! With news Trbojevic will require a shoulder reconstruction in the post season, Manly fans will be sweating on his fitness for the opening rounds of 2020, as he is no doubt the pack leader for the club.

Reuben Garrick made his debut in Round 1, after coming to the Northern Beaches looking for a chance after spending the previous few seasons with the Dragons NSW Cup side. Garrick was a revelation on the wing, holding his spot for the entire season, scoring 16 tries and taking on the goalkicking. Garrick's rookie season was rewarded when he was selected for the Australian Nines side in the post season.

Corey Waddell was another player who came to the Northern Beaches looking for an opportunity to play first grade and the Panthers junior didn't disappoint, mimicking the workhorse role of Jake Trbojevic over the Origin period and also filling in on an edge off the interchange bench following his debut in Round 2.

It was a tough season for Manly's feeder club the Blacktown Workers who finished last in the NSW Cup in 2019. The side started well, but then lost a host of players to First Grade who didn't look back once they got there. Those key player losses combined with a stack of injuries saw the club register just 6 wins and 15 losses. Halfback come hooker Zach Docker-Clay was undoubtedly their best player, scoring 9 tries and 12 try assists from dummy half.

Manly's Under 20 side fared no better, finishing stone-motherless last with just two wins from 20 games.

Things look very good for the Sea Eagles, they have a very strong starting forward pack, with the class of Tom Trbojevic and Daly Cherry-Evans continuing to add the X-factor in attack. With Des Hasler entering his second season in charge, he will start to really make his mark in 2020.

The only real loss for the Eagles is hooker Api Koroisau, who has left the club for Penrith, with the club backing the very talented Manase Fainu as their main man out of dummy half. These plans however look to be in disarray, with the young hooker currently incarcerated as a suspect in a stabbing incident in the off-season. The Eagles will no doubt be hopeful that Fainu is released and found not guilty, otherwise this could prove a major issue come Round 1.