After finishing 4th in the regular season in 2017, fans were expecting a continuation of the rise of the club, and were shocked to see a side that would struggle to compete for 80 minutes, falling to the wooden spoon in 2018.

Eels officials felt some fresh blood was needed, and signed Blake Ferguson, Shaun Lane, Junior Paulo, and a rookie, dripping with raw potential, name Maika Sivo - surely, such an influx of new faces would result in better performances in 2019.

The season kicked off in disappointing fashion, with livewire hooker Kaysa Pritchard declaring his retirement from active playing, due to recurring injuries. This gave young hooker Reed Mahoney the starting hooker role for 2019.

The 2019 Eels began their campaign very strongly, defeating Penrith, and the Bulldogs, in the opening two weeks of the competition.

Young five-eighth Dylan Brown, only 18, impressed many pundits with his strong defence, willingness to run the ball, and ice-cool composure under pressure.

Round 3 saw the Eels take on the reigning Premiers, the Roosters; despite the loss, the eventual scoreline of 32-18 did not accurately reflect the intensity of the match. Parramatta opened the scoring, and clawed back to lead the match on a few occasions - until, ultimately, the Roosters' superior fitness, class, and experience, ran them over the top of the gallant Eels.

The Eels would enter a pattern of win-loss for a few weeks - beating Cronulla, losing to the Raiders, defeating the Tigers 51-6 on Easter Monday (the unveiling of the breath-taking new Bankwest Stadium), succumbing to the Knights, overcoming the Dragons, and then, finally, being dismantled 64-10 at the hands of the superior Storm.

The Eels made Bankwest Stadium their fortress, winning (and winning convincingly) - until they were defeated 16-10 by the Panthers, in one of the most dour games of the season.

The Eels would continue to display dominant displays of football at Bankwest Stadium, but struggle away from home (the exceptions being victories against the Raiders in Darwin, the Dragons at Netstrata Jubilee, and the Titans at Cbus Stadium), but struggle to compete away from home.

Come round 25, the Eels were destined to make the top 8; results had gone their way, and all they needed to do was secure a victory over Manly at Bankwest in round 25, in order to secure 6th spot on the ladder.

Well, Brad Arthur evidently got the message to the team that a victory margin of 12 points or more would allow Parramatta to leapfrog Manly into 5th position, and they came out with an emphatic 32-16 win.

Sadly, for the Eels, the Storm also lost in week one of the Finals, and thus the young Parramatta squad had to travel to Melbourne to face an embarrassed Storm outfit in Melbourne, in order to keep their Finals hopes alive; it wasn't to be, as they were completely outclassed by Melbourne, in a 32-nil defeat.

Finishing 5th, and winning the first Final game, was a tremendous improvement - and an impressive achievement, considering the youth present in the squad, as well as the lack of experience evident all across the park for the Eels.

Season 2019 saw the side improve considerably, and although the club still has a lot of work to do, the future looks bright for this promising young football club. 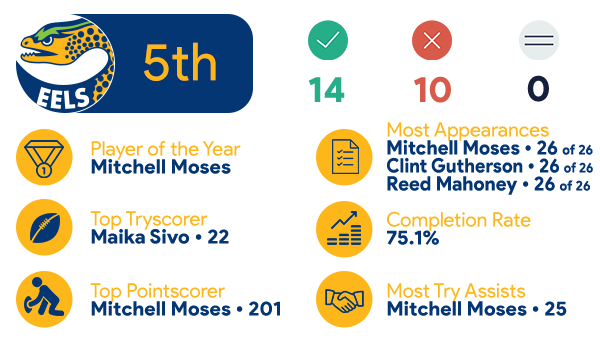 The 19-nil loss to the Raiders in Canberra was perhaps a turning point for the players' belief in themselves; despite a loss, where no points were scored, the defence on display by Parramatta that day was simply phenomenal; Canberra enjoyed all the possession, and all the field territory, and yet only cracked the Eels for 19 points.

There is no doubt that that performance gave the side some belief.

The Eels were one of the best attacking teams of the competition in 2019, finishing the season having scored 533 points (behind only Melbourne, and the Roosters).

It is not surprising, considering that the side boasted players such as Blake Ferguson, Waqa Blake, eventual top try-scorer Maika Sivo, Michael Jennings, Junior Paulo, Manu Ma'u, and Shaun Lane.

What is a little surprising is the ease with which the Eels were able to score their points, considering that the halves pairing featured a player with enormous talent, but hitherto questionable temperament, in Mitchell Moses, and a by-then 19-year old rookie, in Dylan Brown.

Our young halves were able to efficiently utilise their potent backline, and create opportunities which would usually end in points.

Having Blake Ferguson - arguably one of the top wingers in the game -, and a rookie Maika Sivo, in the back three, definitely helped, too.

Despite scoring the third highest amounts of points in the NRL, the Eels conceded 473 points in 2019 - a result which placed them in ninth position in that statistic.

The Eels struggled to control the ruck, and found slowing the wrestle a real struggle.

Though the Eels were a relatively disciplined side throughout 2019, their lack of ability to control the ruck in defence resulted in the team losing several matches, in emphatic fashion (a great example is their loss in Newcastle to the Knights, where the Eels were out-enthused, and were not able to regain control of the ruck).

Mitchell Moses arguably had his finest season in First Grade NRL to date.

He led the NRL for try assists, finished inside the top 4 for points scored, and polled very favourably with judges, to finish third in Dally M voting, and take home the Halfback Of The Year Award.

Moses showed control in his game - a facet which many experts believed that he did not possess, but would require to take his game to the next level -, and defended stoutly, to help his team outscore several sides throughout the year.

Tepai Moeroa, for a fair chunk of the season, was missing game time due to HIA protocols, missing tackles, dropping off tackles, being left on the ground around the ruck, giving away cheap penalties, or simply dropping the ball.

Though only 23 years old, a mountain of expectation was placed on his shoulders, and although his form did improve as the season went on, he did not really offer enough to be considered a success, in this reviewer's eyes; his contributions to the side could have been made by any number of other players.

Sivo had all the physical attributes to succeed in the NRL, but had never played senior NRL football. He demonstrated he possessed unparalleled power to his game, regularly pushing people off tackles with what has become known as the most brutal fend in the NRL, and rose to prominence as a genuine excitement machine; give Sivo the ball, and exciting things will follow.

Dylan Brown entered the 2019 pre-season with the weight of the world on his shoulders - he was stepping in to take the umber 6 jersey from Corey Norman, who was cut from the team in the off-season, and very little was known about young Brown.

Dylan Brown showed, throughout 2019, that he loved contact; he defended very strongly, and did not shy away from contact, and was happy to run the ball first, and distribute the ball second.

He played a solid foil to Mitchell Moses, and despite taking a back seat to his more senior halves partner, he showed coolness under pressure, and genuine football IQ.

In its final season as a feeder club to the Parramatta Eels, the Wentworthville Magpies finished in 8th position, but were able to fight their way to the Grand Final.

They were eventually defeated by the Jets in the Grand Final.

NRL players made up a fair chunk of the Magpies' squad - Tim Mannah spent most of his season playing for the black and white, and players such as Josh Hoffman, Ray Stone, Oregon Kaufusi, and Ethan Parry swiveled between NSW Cup and First Grade; this had an effect on the side's consistency, helping explain their 8th-placed finish, but also meant that, come the Finals, the side was brimming with the confidence, and professionalism, that having full-time First Graders in your team will bring.

The Eels' 2019 Jersey Flegg Cup side was cruelled by injuries, and loss of form, and the side finished 11th, missing the Finals.

The Eels added Reagan Campbell-Gillard to their stocks for 2020, a very astute signing; the Eels struggled to control the ruck, predominantly in defence, and RCG's size, mobility, and aggression will be a bonus for this young squad.

Maika Sivo, Blake Ferguson, and Waqa Blake are excitement machines; Michael Jennings is a dependable, veteran warrior; and Clint Gutherson is a ball of energy, who lifts his teammates with his enthusiasm. Former Rooster and Tiger, Ryan Matterson will be the man tasked with replacing the scariest man in rugby league - Manu Ma'u, who is off to Hull in 2020.

Expectations will be high - a beautiful new stadium, an A-grade addition to the roster, and an overall roster that is largely unchanged from 2019 -, but in this reviewer's eyes, a Top 4 finish in 2020 is not out of the question; rather, it should be the expectation of the club.