One last hurrah in Melbourne or was this the beginning of the end?

For 95% of 2019, it was a dream for anyone associated with the Storm at any level. Record wins, break out stars, player development, regular season superiority and a defence that was a peer to some of the greatest defences of all time.

Then we have those last few weeks - a controversial home loss in week one of the finals marred by two missed sin bin calls in the first half, and the now infamous 'out' call by the sideline official.

Fast forward two weeks and it's a grand final rematch against the team they didn't so much as whimper against in the big dance last year. Whilst the showing was far improved on the 2018 decider, the preliminary final result wasn't a victory and this leaves us with the question as to whether Melbourne can find another gear in the big games in 2020.

Poor results in 2019 were few and far between for the Storm, and for the most part the year will be reflected upon fondly. From lighting up Magic Round by blitzing the Parramatta Eels 64-10, picking up a win over last year's conquerors 14-12 in Adelaide, or an eye into the future with an Origin-affected Storm scoring an away win over the St George Illawarra Dragons. There was also the much hyped 2019 version of the ‘battle of Brookie' which - largely thanks to a masterclass of game management in the first half - turned out to be more of a bludger than a battle.

When we do examine the poor results there is a worrying trend at the back end of the season. When the heat was turned up, the Storm were unable to match it with some of the other elite teams in the competition for the full 80 minutes - when they were 'on' in those matches they looked the better side, but couldn't crack their opponents. When they were 'off'? Opposition scoring was happening far too freely in comparison.

All in all, whilst 2019 was an enjoyable year to be a Storm fan, there is still a lingering 'what if'. Hopefully this exists for the players and they can use the disappointment of the last two seasons to spur them back to glory in 2020. 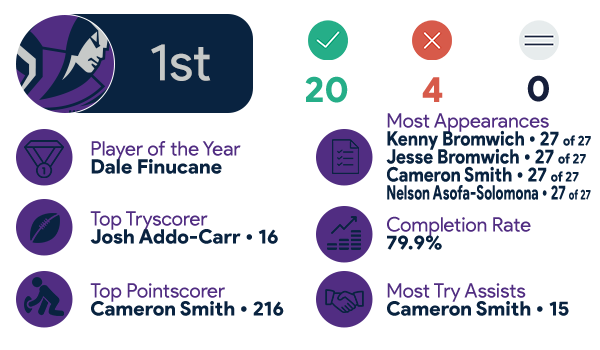 Papenhyuzen becomes a starter. Starting the year as the 3rd choice fullback, Ryan Papenhyuzen would have his eyes on maybe scoring a game during the representative season. His performances however (particularly that off the bench in the Magic Round) ensured that his case to become starting fullback was irresistible. This left coach Craig Bellamy with the conundrum of fitting three players into two positions, and ultimately Brodie Croft was left as the odd man out, with Bellamy preferring the defensive solidarity of Hughes over the genuine half back in Croft.

Whether the Storm could have gotten over the lines in the close game with another genuine playmaker will remain an unknown, however this was definitely the turning point in the Storm's season.

Mark the name Ryan Papenhyzuen down as a future superstar (if you haven't already). From dynamic bench performances to a starting fullback and all this after being third choice to begin the year, if he can maintain this development curve than in 3-4 seasons time he will be challenging Tom Trbojevic and James Tedesco as one of the elite full backs in the game.

Aside from the uncovering a dynamic fullback Melbourne saw arguably the best year out of two key members of the forward pack - Kenny Bromwich became a vital and dangerous member of the left hand attack whilst the human skyscraper himself Nelson Asofa-Solomona was the jewel in the crown of the Storm's star studded forward pack.

Lastly, what really worked was the defence, statistically the purple pride were up there among the best teams of all-time in terms of points conceded, as well as cumulative losing margin throughout a whole season. This year without the ball was vintage Bellamy and vintage Melbourne.

Big games and big moments. When the heat was on, the Storm was just that little-bit shy of what was required to get the job done. An unsettled spine never bodes well for a team aiming to win the big dance and that played out for the Storm as well.

What also cannot be overlooked was the devastating knee injury to key prop Christian Welch who had been in career best form and deservedly earned a State of Origin call up. The loss of his size but also talent off the bench was hard to replace for Melbourne.

As has been evident throughout this review so far, it was a breakout season from Ryan Papenhyuzen, as well as the significant improvements from Kenny Bromwich and Nelson Asofa-Solomona.

Whilst these players were dynamic we must not overlook the high level consistency that typifies being a Storm player, and with this in mind Dale Finucane and Jahrome Hughes were your model Storm players. Whilst they may have never stolen the limelight they delivered a performance worthy of the jersey each and every week.

Lastly, there was a guy you might have heard of before, he played his 400th game this season, oh and he came second in the Dally M - not bad for a bloke who has been playing since some of his fellow squad members were literally in diapers! Cameron Smith's consistency - particularly since his rep retirement - is an asset to the game.

The Sunshine Coast Falcons had an immense season, much the same as their NRL counterparts - but like the Storm themselves, the Falcons couldn't perform when it mattered. The men in yellow and black stumbled in the opening week, recovered in Week 2 and were ultimately bundled out in the preliminary finals. Melbourne's other feeder at Cup level - Easts Tigers - finished eighth and upset the fifth-placed Norths Devils in Week 1, before becoming the Falcons' victim in Week 2.

Both the Falcons and Tigers placed in the top eight - fourth for Sunshine Coast and seventh for Easts. While Norths saw Easts out of the finals in the opening week, the Falcons overturned minor premiers Townsville in Week 1, then accounted for Burleigh in the preliminary final before wiping out Wynnum Manly on Grand Final day to claim the Under 20's title.

When the NRL Under 20's competition disbanded in 2017, the Storm's local direct Under 20's feeder became the Victoria Thunderbolts, and the club elected to participate in QRL junior competitions at U20 and U18 level. In 2019, however, they switched to the NSWRL, fielding teams in Jersey Flegg and SG Ball Cup. The Flegg side had a fairly quiet season, winning just three games and finishing 12th of 14 sides.

There is probably one major mystery at the Storm for 2020, that being the number 7 jersey. Whilst being consistent, Jahrome Hughes has never set the world alight and at this stage doesn't appear to have the game management that will be required when Cameron Smith eventually retires (Maybe 2024? 2050?). Does the mantle then fall back to Croft who has now been dropped in both his full time seasons in Melbourne or will Cooper Johns expedite his development in the off season sufficiently enough to get a run at first grade?

On a serious note, 2020 may well be Smith's last season in the NRL which is more than enough motivation for the squad to lift and have one more premiership tilt, though we've seen this recently with another legend in Johnathan Thurston not play out so nicely. It's always foolish to write off the Storm and whilst they have both Bellamy and Smith at the wheel I think it's fair to say they will be in the conversation again come September 2020.

Lastly, I wanted to express my gratitude and fondness for Will Chambers, a Melbourne legend who will be sorely missed!