In 2019 the Canberra Raiders exceeded all expectations, making their first Grand Final since 1994 and with a relatively similar squad for 2020, this will see the Green Machine will go into next season as one of the teams to beat.

Without doubt the 2019 season will be remembered for the ‘Six Again' fiasco in the closing stages of the decider. Was it a horrible call? No doubt. Did it rob them a right of reply? Absolutely. Did it cost them the Grand Final? Well with 8 proceeding sets on the Roosters line and the Tricolours going the length with one opportunity. You would have to say no. This will be an important part of 2020 for Ricky Stuart's men that they take what they did in 2019 and take it up another notch in 2020, rather than dwell on what might have been over their devastating Grand Final loss.

In recent seasons the Raiders were noted slow starters, however in 2019 they got going from Round 1, with a 21-0 win over the Titans away from home. They then dropped their first home game of the season against the Storm, however then won their next 4 straight and after Round 6 were looking like team who were building nicely.  Their key player Josh Hodgson was in red hot form and unknown buys in fullback Charnze Nicholl-Klokstad and firebrand backrower John Bateman caught everyone by surprise turning into match winners for their new side.

Canberra's season then flat lined, with the Green Machine stumbling terribly to register just 1 win from 5 matches heading into the Origin period. With Jack Wighton, Josh Papalii and Nick Cotric being selected for higher honours, the Raiders needed to lift and they did, winning 7 of their next 8, including a thrilling 22-20 win over the Sharks in Canberra, followed by impressive over the Dragons, Panthers and Warriors on the road.

The feeling however from critics were that the Raiders had a soft draw and until they could claim the scalp of one of the Top 4 sides then Canberra weren't proven contenders. Round 21 at GIO Stadium saw the chance to prove their critics wrong, when they hosted the defending premiers, the Roosters in what turned out to be a Grand Final preview. The Roosters started well with a try to Victor Radley early, however the Green Machine turned it on with quick tries to Jordan Rapana and then captain Jarrod Croker giving the Raiders the edge before the Roosters fought back with tries to Latrell Mitchell and Daniel Tupou.

It was the second half where the Raiders defence lifted and through this, they took the ascendency with their aggressive forwards taking it to the premiers. What split the sides in the end was a sublime pass from Dally M medallist, James Tedesco for giant winger Daniel Tupou for his second try that was just unstoppable and gave the Roosters the win. The tough loss gave the Green Machine the confidence that they were up there with the top teams in 2019 and they went on to defeat the Storm in Melbourne, despite being down 18-0 after 30 minutes and then went on to beat the Sharks away from home to secure a Top 4 spot.

Like a Melbourne Cup winning trainer, Ricky Stuart had his side firing as they rounded the turn for home, when they tipped the competition on its head, again stunning Melbourne at home in their first final, with cult hero John Bateman running off a Joey Leilua flick pass to catch defenders grasping for air on the inside to secure a momentous win for the club.

The Raiders then had a home preliminary final in the Nation's Capital, which saw a sell-out crowd and a city covered in lime green turn out for the home final against the Rabbitohs, for the chance to make their first Grand Final in 25 years. The Raiders didn't disappoint prevailing 16-10, with blockbusting prop Josh Papalii writing himself into Raiders folklore with another match sealing try to send his side into the big dance.

Despite the bitter Grand Final loss, the Raiders season was an unforgettable one for their long suffering fans and will surely see memberships go through the roof, as the Raiders look to go one step further in 2020. 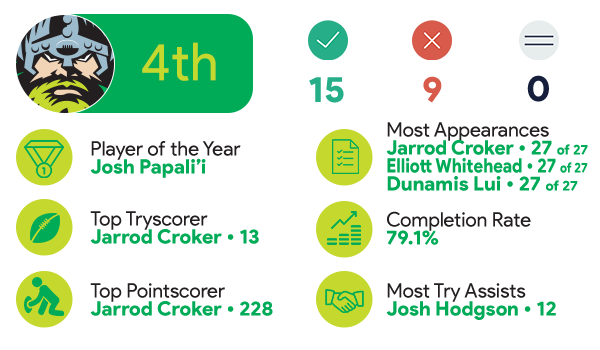 Round 22 saw the Raiders travel to AAMI Park in Melbourne with seemingly their last chance to guarantee themselves a Top 4 finish, following a heartbreaking loss to the Roosters the week before. Melbourne started with a blaze, quickly racing out to an 18-0 lead after just 30 minutes, with Canberra losing both Joseph Tapine and Jack Wighton to the Sin Bin and it looked like things could get messy for the Raiders.

However in a remarkable turn-around, Canberra ran in three successive tries through Jordan Rapana and skipper Jarrod Croker, who scored a double. Prop Josh Papalii then skittled the Storm defence close to the line, to clinch the match winner and send the Raiders to second spot on the ladder on for and against. The win was simply unheard of at AAMI Park and gave the side, and fans the belief that Canberra were not just making up the numbers.

In recent years, Canberra had always been known as a side that could score a lot of points and if you score 30, they would try and score 40. However what made the Raiders the most improved side in 2019 was their defence. In 2018 they were ranked the 12th best defensive side, fast forward to 2019 and they jumped dramatically to the 3rd best defensive side in the NRL.

Further to their improved defensive display in 2019, their recruitment was A+, with English internationals in Ryan Sutton and John Bateman bringing some steal and resolve in defence, with Bateman in particular making his mark on the competition with his aggressive attitude and refusing to take a backward step. He gave the Raiders something they have lacked for many years…mongrel. Not much was noticed at the beginning of the season when the Raiders plucked 7 game Warrior Charnze Nicoll-Klokstad from over the ditch. ‘CNK' however was named at fullback in Round 1, allowing Jack Wighton to return to five-eighth, an experiment which was abandoned by the Raiders under Ricky Stuart some years ago. The move proved a masterstroke with Nicoll-Klokstad scoring 11 tries for the season with 3 try assists and 8 linebreaks, while Wighton went onto to make his debut for New South Wales and Australia.

Despite the sensational Viking Clap the Raiders receive from their parochial home fans at each game at Canberra Stadium in often cold conditions, Canberra's home record in 2019 was abysmal, winning 5 from 11 home games.

With their away record at an impressive 10 from 13 games, it seems bizarre that a side that has such an advantage with the weather, being in the coldest city in Australia, to only have less than a 50% ratio is simply poor and it will need to be something that they rectify in 2020 if they are again to feature in the Top 4 again.

Josh Papalii became the first player in Raiders history to win the Meninga Medal three times, when the Queensland and Australian representative again took out the Raiders player of the year. Papalii has long been the key to the Raiders success over the years and the permanent switch from the backrow to the front row in 2019 proved another excellent move by Ricky Stuart and saw Papalii easily produce his most consistent year. Papalii scored 6 tries for the season, but most importantly he scored some huge match winners vs Storm in Round 24 and vs Rabbitohs to send the Green Machine into the Grand Final.

Jack Wighton produced one of the most remarkable rags to riches stories of 2019. After receiving a whopping 10 game suspension for a drunken night out in Canberra in 2018, Wighton was extremely lucky to not be sacked by the club just 12 months ago. As mentioned, his pre-season move from fullback to five-eighth proved pivotal to the Raiders success, with the Central West junior making his debut on the representative stage, culminating in winning the Clive Churchill Medal in a losing side in the Grand Final.

Corey Horsburgh made his debut off the pine in Round 1 and the aggressive red head looked at home in First Grade, with the Queensland product going on to play 22 matches in the lime green and playing in a Grand Final in his rookie year. The good news for Raiders fans is that the 21 year old cult figure has re-signed with the club for a further 3 seasons.

Bailey Simonsson likewise made his debut in Round 1, coming to the club from the New Zealand Rugby Sevens set up in the pre-season. The Kiwi winger was originally keeping the #5 jersey warm for Jordan Rapana who missed the first few matches of the year with a shoulder injury, however after scoring a try on debut, he went onto score 8 tries from 21 appearances and proved an important player off the bench during the sides in the Finals Series campaign. Simonsson has been rewarded for his amazing debut season, signing with the club until the end of the 2023 season.

Mounties had a red hot start to the season, winning eight of their first nine matches in Canterbury Cup. However, after losing stars Aidan Sezer, Hudson Young and Emre Guler to the first grade side late in the season, they limped into the finals in 6th position.

Facing eventual Premiers the Newtown Jets in the first week of the finals, Mounties didn't fire a shot conceding five second half tries to end their season in disappointing fashion, after such a promising start.

The Raiders snuck into the top four with a 12-6 win-loss ratio (2 draws). In the opening weekend of the finals they pipped minor premiers Cronulla in a qualifying final, before a 10-point victory over the Roosters in the preliminary final set up a Grand Final showdown with the South Sydney Rabbitohs.

The Green Machine trailed 16-14 in the Bankwest Stadium decider with just seconds on the clock when they were awarded a controversial deliberate forward pass penalty inside the Rabbitohs' half... but goalkicker Tobias Westcott couldn't land the long-range shot and the Rabbitohs were crowned champions.

There is no doubt if Canberra can put their Grand Final heartbreak behind them and let it drive them, then they will be one of the teams to beat in 2020. Knowing that their coach Ricky Stuart is the ultimate competitor, it seems a good bet that he will be able to light a fire in his chargers for this upcoming season and the Green Machine can again contend for the premiership.

Stuart was famous for saying in 2015 of his beloved Raiders ‘that he didn't have any representative experience at the joint and until we do we won't win big matches'. His frustration is now over five years later, with his side containing 4 England internationals (Josh Hodgson, John Bateman, Elliott Whitehead and new recruit George Williams), and 3 Australian internationals (Josh Papalii, Jack Wighton and Nick Cotric). And with the experience of a Grand Final for the majority of his Top 17, the Green Machine are a big chance next year to go the extra step.