Premiers in a league of their own

The Sydney Roosters made history in 2019 as the first team in 26 years to record back-to-back premierships in a united competition.

Kicking off their title defence in February with a comprehensive World Club Challenge victory over Wigan, the foundation club capped off the season eight months later with a gutsy 14-8 win against Canberra to leave no doubts about their status as one of the greatest teams of the modern era.

Finishing in second position with 17 wins throughout the regular season, the Roosters were especially potent at their temporary home of the Sydney Cricket Ground with ten wins from 11 appearances, while they also claimed the scalp of every club bar North Queensland at least once under Trent Robinson's guidance.

Coming into the premiership decider as strong favourites after overpowering South Sydney and Melbourne during the finals, a combination of luck and determination saw the tricolours snatch victory with a late four-pointer, allowing NRL veteran Cooper Cronk to bow out as a legend of the club and game of rugby league.

Heading towards 2020 with their sights set on a third consecutive grand final victory, the Roosters look set to remain a formidable side despite Cronk's retirement and a looming challenge to remain salary cap compliant. 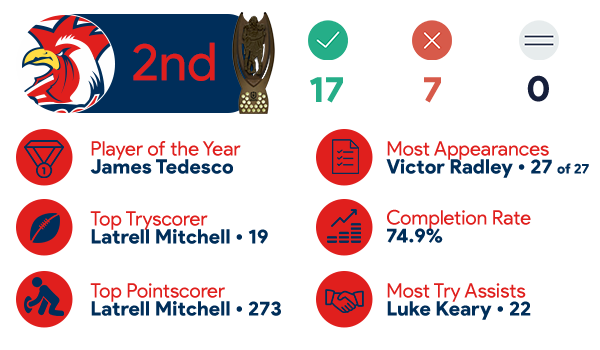 While the bulk of the best possible side remained relatively stable throughout the season, the conscious choice by Trent Robinson to rotate players proved to be a masterstroke. Affording youngsters such as Lindsay Collins, Sitili Tupouniua and Drew Hutchinson regular game time and the confidence to step up when required, the move allowed the likes of James Tedesco, Cooper Cronk and Boyd Cordner to pace themselves for the business end of the year.

While the side's ability to mesmerise opponents in attack resulted in a number of blowout margins, the Roosters ability to defend their own line stood them ahead of the other 15 NRL clubs. Averaging just over 13 points against per game, the resolve shown throughout the season allowed the foundation club to concede an impressive total of 20 points during the finals series.

After leading the competition with eight wins from their first nine matches, the Roosters found the middle-third of the season particularly taxing as opponents lifted in an effort to knock the reigning premiers off their perch.

Managing two wins from seven matches between May and July, the additional toll of Origin and injuries saw the side drop to fourth before correcting course with ten wins from their final 11 matches.

Enjoying a stellar season at club and state levels respectively, fullback James Tedesco asserted his status as the premier fullback in the game today. Crossing for a career best total of 18 tries - including the match-winner in both the preliminary and grand finals (not to mention the Origin decider) - the 26-year-old speedster was a constant threat for opposition defences to contend with.

Filling in at hooker with Jake Friend unavailable for extended periods, Verrills finished the year by scoring the opening try in the grand final win over Canberra.

Joining his father, Adrian, in representing the Roosters in first grade, Lam will be pushing for a regular starting berth in the halves following the retirement of Cooper Cronk.

Making a successful return from a serious knee injury, Smith bagged tries in his two appearances late in the year, while Curran departed with one appearance to his name to join the Warriors midway through 2019.

Lower Grades round up

Aligning themselves with the North Sydney Bears following a four-year association with the Wyong Roos, the Roosters' reserve graders finished the regular season in third position with 13 wins from 22 matches. Bowing out of the play-offs in straight sets, a poor goal-kicking performance from Drew Hutchinson saw the Bears exit the premiership via a semi-final defeat at the hands of eventual premiers, Newtown.

Finishing the regular season in second position with 13 wins and a draw from 20 matches, the Roosters Under 20's side fell one game short of a shot at the title after going down to the Raiders in the preliminary final.

Aiming to become the first team to record a hat-trick of premierships since Parramatta in the early 1980's, the retirement of Cooper Cronk will see the Roosters remain a dominant force, albeit one lacking the poise needed to feature on grand final day.

Best lineup for next season