It's crunch time at Red Hill.

The first year under Anthony Seibold for the Brisbane Broncos didn't exactly go to plan. Fresh off a coach-swap which saw legendary boss Wayne Bennett head to South Sydney, the new Broncos leader seemed to struggle through 2019 as defensive lapses and halves issues plagued the maroon-and-gold's campaign.

What hurt the most though, wasn't a pattern throughout the season so much as the way the Broncos fizzed out of the premiership race. Seibold's side appeared to be rolling in some good form as the final rounds of the season unfurled - in Round 24 they pipped Parramatta at home with a one-point golden point victory, and almost looked finals-ready with three wins in four starts up to that point.

From there it unravelled dramatically. Brisbane headed to ANZ in the final round for a classic 'banana peel' clash with Canterbury - and boy did they slip. The Bulldogs recorded their biggest score of the season with a 30-14 rout of the visiting Broncos side and the result ended up pushing them down to 8th place, which saw them facing the Eels once again in the opening week of the finals, instead of either Cronulla or Manly. Anyone who watched the opening weekend of last season's finals series knows that Parramatta smashed all kinds of records to end Brisbane's campaign in the most unceremonious of fashions - 58-0 the final score at Bankwest on that fateful Sunday.

So we now enter a new season. Seibold's still in charge, although the captaincy has changed. Back-rower Alex Glenn will now call the shots - previous captain Darius Boyd remains in the side but will take a lower pressure role out in the centres. Boyd's defence came in for close scrutiny in 2019 - with good reason - so it will be an interesting one to see if they improve on that in 2020.

There's definitely cause for hope in the Sunshine State though - on their day, the Broncos still have some of the most intimidated forwards in the game - David Fifita, Payne Haas, Matt Lodge, Tevita Pangai Junior. If they're all fit and firing this season, they'll carry their side a long way this year.

In addition to the four aforementioned powerhouses, there are plenty of reasons for hope at Brisbane. Thomas Flegler and Patty Carrigan are still up-and-coming and should continue to deliver coming off rookie seasons in 2019, then there's Joe Ofahengaue, who's turned out for Tonga six times since his 2015 debut, and finally earned Queensland selection during last year's Origin series.

If we're being honest, Brisbane has struggled for consistency in their playmaking department since the retirement of Darren Lockyer. The fullback-turned-fiveeighth left huge shoes to fill after he bid the NRL farewell in 2011 and for the best part of a decade, the club has been experimenting ever since. Corey Norman, Ben Hunt, Anthony Milford, Ben Barba, Darius Boyd, Benji Marshall, and yeah, even a reprisal from a veteran Scott Prince have figured in the 6-and-7 jerseys for the Broncos. It's been a tough decade. While Milford is still there, can the signing of former Melbourne half Brodie Croft help solve those woes? Only time will tell.

Brisbane have managed to pull a pretty decent start, not having to leave their home state over the opening three weeks. They visit the Cowboys' new stadium in the season opener, then host the Rabbitohs at Suncorp in Round 2 before a short jaunt down the M1 to face the Titans in Round 3.

As has become custom, Brisbane pick up a pseudo-home-game in Round 8 with Manly's Magic Round hosting rights on the Friday night of the three-day event, while they've also picked up back-to-back home games heading into their Round 12 bye which preceeds Origin I.

Their run home is well stacked too - the Broncos will play five of their last seven games at Suncorp Stadium, with trips to Campbelltown and Melbourne among that block. 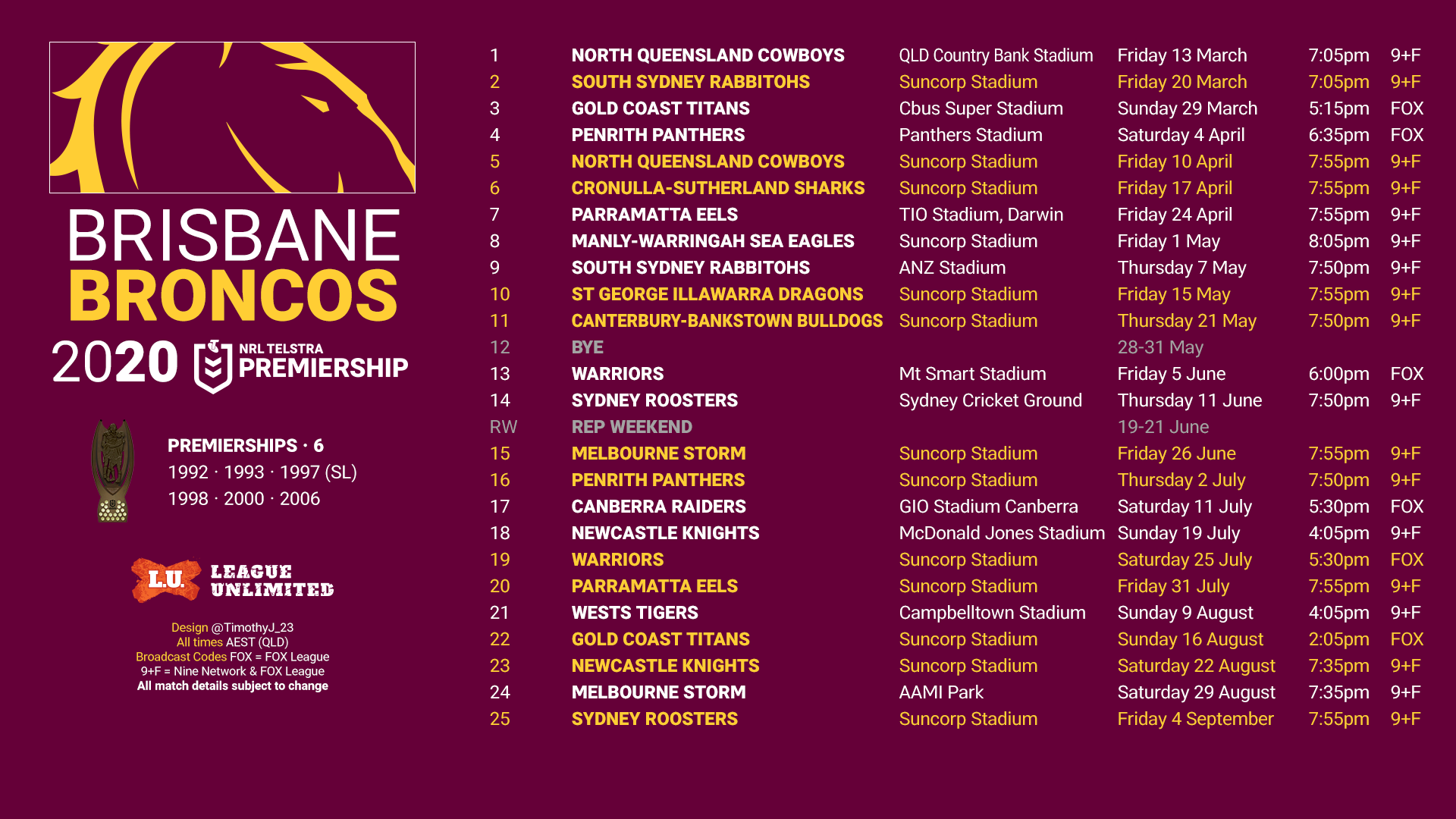 While the halves will be key, there's another player who needs to have a big impact in 2020 and that's Jack Bird.

A key signing at the start of 2018, Bird moved from the Sharks and the club had high expectations. Instead he played just 8 matches that year, and only 9 in 2019 - first he succumbed to a sternum injury which limited his 2018 season, before last year's knee reconstruction saw him miss everything from Round 10 onwards. According to all reports he's fit and ready for this season, so it's only going to be time and perhaps a little bit of luck which will allow us to once again see the excitement machine that we knew him to be in his first three NRL seasons at the Sharks.

With the halves experiment over and Jamayne Isaako looking likely to hold the fullback jersey this season, Darius Boyd's new home looks set to be in the backline, either at centre or on the wing. A testing 2019 season for the Brisbane veteran will hopefully make way to a more relaxed Boyd this season - provided he can improve his defence. With less responsibility on his shoulders, now's the time for Boyd to show why he's been so integral to the Broncos in his two long stints at the club.

Brisbane are taking a fairly experienced squad into 2020, with most of the names on their list having seen a good touch of first grade experience already. Of those, Xavier Coates and Herbie Farnworth have shown the greatest promise so far, both called on during the Origin period last year. That short burst of games the pair managed to rack up before the stars returned saw them help the 'Baby Broncos' to a 24-22 win over the Sharks away from home. Both should be a good shot at more regular footy in 2020.

Fantiesi Niu made his international debut for the Tonga Invitational side late last year and could break through into first grade in the back half of 2020.

There are a few questions over key positions for the Broncos - the hooking rotation probably the biggest. Jake Turpin is likely to start the season with the #9 jumper while the bench utility role will come down to Cory Paix or Andrew McCullough.