The Sharks came into the 2019 season in all sorts of turmoil: players misbehaving and a coach being banned for life (at the time) and replaced by rookie assistant coach John Morris, all looked set to derail their title aspirations before the season even started.

But Morris rallied his troops superbly and even managed to introduce several young guns to the top side, finishing the season in 7th place to ensure that captain Paul Gallen reached the finals in his final season as a player. They sadly bowed out in the first week in a somewhat surprising loss to the 6th placed Manly.

The year saw the emergence of a number of rookies, namely Bronson Xerri, Ronaldo Mulitalo, Briton Nikora, William Kennedy and Billy Magoulias all proving themselves ready for the NRL, Nikora even making it to Test level for New Zealand.

Their 2020 campaign is already besieged by talk that rep backs Josh Morris and Josh Dugan both want to leave the club, however they still have a very strong forward pack, reliable spine and some very speedy and exciting backs, making them a favourite to finish in the top 8 yet again.

That ever important good mix of youth and experience, speed and power. They have a reliable halves pairing, a talented young hooker and a number of options at fullback. They also have a very strong forward pack, talented bench rotation and speedy outside backs with plenty of x-factor. Coach John Morris also has the team's attacking working superbly.

Spine instability - The Sharks have their halves set, with Shaun Johnson and Chad Townsend. However their hooker will be rookie Blayke Brailey while their fullback could be either Matt Moylan or Josh Dugan, neither of which nailed down the position last season as both were hampered by injuries.

The Sharks will be playing their home games out of Netstrata Jubilee Stadium during the 2020 season. Whether they can turn this into a fortress that brings them success is yet to be seen. The Sharks have won just 12 of their 36 games at the venue and only two of their 9 games there since 2000.

They have a tough start to the year, taking on the Rabbitohs and the Storm, followed by the unpredictable Knights and Bulldogs. Then another tough run into the Origin period where they will face the Roosters, Brisbane in Brisbane and Manly. Round 15 sees things get tough again as they face Parramatta, bogey side Canberra and in Round 18, square off against Manly, followed by another clash with the Storm.

They round out 2020 with another match against the defending premiers, a trip to Townsville to face the Cowboys, a home game at Netstrata against the Dragons and finally, a clash against the hot and cold Warriors. 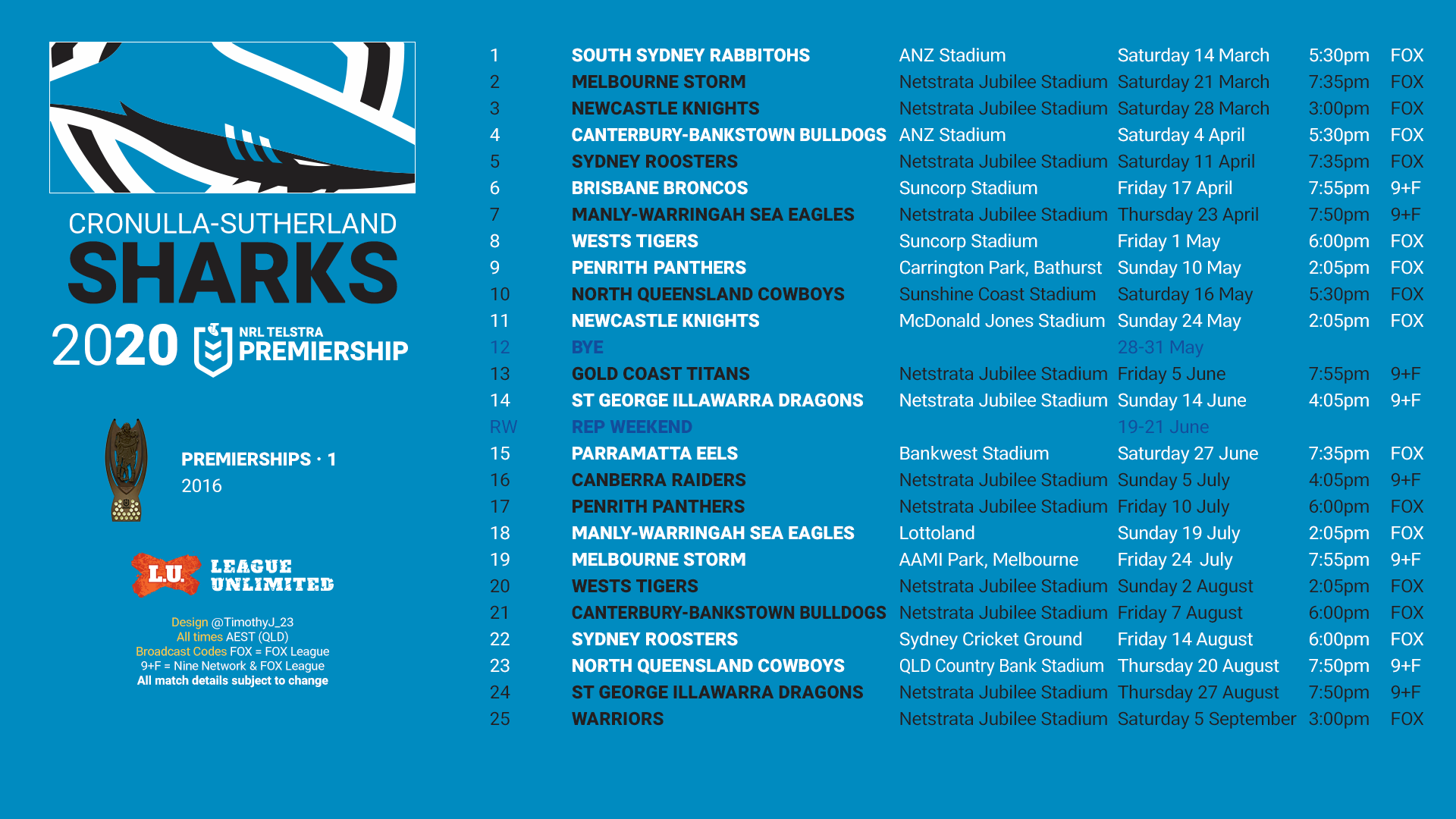 First and foremost, 2020 has to be the year that Shaun Johnson fires at the Sharks. If he does, this side can go deep into the finals.

Another key player and the most important to this Cronulla outfit is captain Wade Graham. Arguably the most skilful back rowers in the world, missed a big chunk of 2019 to repair some injuries. After some great performances in 2019 and a full offseason, he will be ready to rip and tear come Round 1.

Bronson Xerri had a breakout debut season and there is no reasons why he won't be even better in 2020. Halfway through 2019 saw his game starting to evolve and he started looking for the ball instead of waiting for it. This made him an even more dynamic player out wide.

William Kennedy made his debut in 2019, appearing in just 2 games, but he could well be the long term fullback option for the Sharks. Don't be surprised if he gets an opportunity at the back at some time in 2020.

Blayke Brailey played 15 matches in his debut season last year, deputising for his brother Jayden. This year though he will be the starting hooker due to his brother moving to Newcastle. With that big pack around him, he will get the best opportunity to shine that any young rake could ever wish for.