The only way is up.

After what can only be described as a disastrous 2019 campaign, the Titans collected their second wooden spoon and a win-loss record of four and twenty suggests maybe they were indeed eating too many meat pies as they recorded their worst season in club history.

To be fair, they had their share of setbacks with arguably their two most high profile players playing little football. Captain Ryan James sat out most of the year after rupturing his ACL in Round six and halfback Ash Taylor only managed to run out on ten occasions throughout the year as he battled injury and personal issues.

In a cruel blow before a ball has been kicked this season, James suffered a recurrence of last year's injury at training recently and will again sit out the season, leaving the Titans a quality forward and leader short as they finalize preparations for 2020.

The good news - Taylor is reportedly training the house down and has displayed an exceptional attitude this pre-season and looks set to be given the chance to reclaim his number seven jersey and live up to his lofty pay packet.

Amidst the carnage last year, Garth Brennan was punted as head coach with former St Helens guru Justin Holbrook handed the reigns in what will be his debut season as an NRL coach.

If the job at hand wasn't challenging enough for Holbrook, the news of Jai Arrow's impending departure to South Sydney next season is another psychological blow to the playing group and could prove an unwanted distraction as the season wears on.

If the Titans can stay competitive in most matches and are still alive competing for a place in the finals at the back end of the year, that would be considered a win and pass mark for this year as they build for better times ahead.  For that to happen, Justin Holbrook will have played a major part.

Having served a strong lower grade apprenticeship in Australia including a stint at the Roosters alongside Trent Robinson in 2017, Holbrook ventured to the English Super League for his shot as a head coach where he enjoyed an 80% winning record culminating in a Super League title with St Helens last year.

It's simply a bridge too far.

Apart from their base last year, the impending departure of Arrow and the injury to James, they look severely tested for depth outside their top 17. Also, that opening block of six games. There's a very real possibility they could be staring down the barrel of 0 from 6 to start things.

The opening rounds should paint a picture of how this season plays out for the Titans after they were handed a brutal draw to open their campaign in which they will meet top eight teams from last year in a challenging six week block.

Opening the season with an away trip to Canberra, they will then return home to host the Eels and Broncos in consecutive weeks before hitting the road again for a daunting three week block in which they will face the Roosters, Storm and Sea Eagles.

Intrinsically the whole draw is a tough one for the Gold Coast - starting from the bottom indeed every game will be a battle, but if they can get some momentum, then they might be able to avoid the dreaded spoon again.

The back-end of the 2020 fixture list is much better for the cellar-dwelling side, a contrast to the opening six rounds. Instead of four away and two home, they play four home and two away as the season closes out. 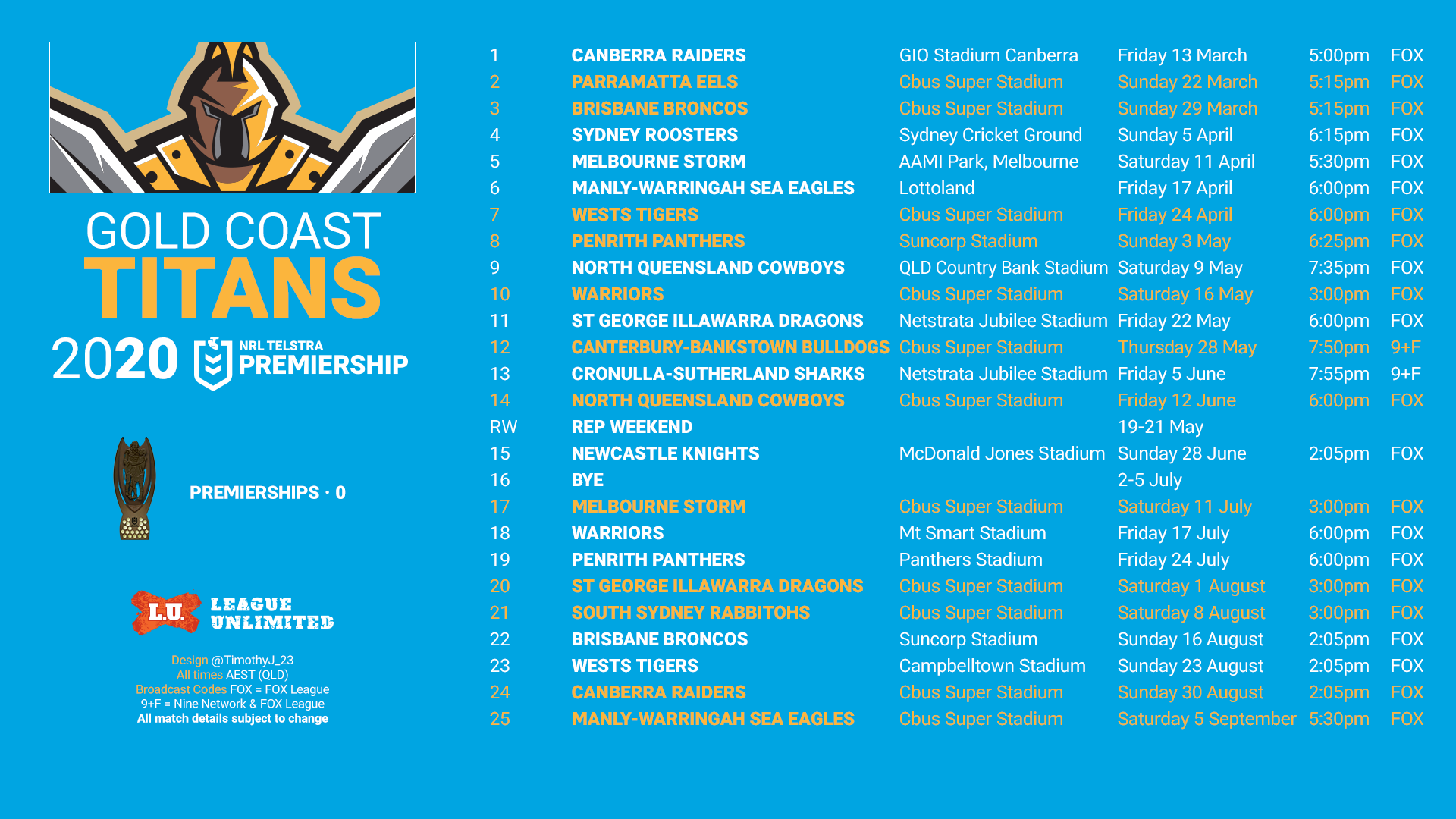 In a breakout 2019 season, Moeaki Fotuaika averaged 26 tackles and 133 metres per game, impressive stats when you consider the adversity his team were facing and the fact that as a then 19 year old, his best days as a prop forward are still well into the future. Still, he will need to lift again in the absence of James this year in order to give the Titans a platform to work off. The man they call Moey has tremendous strength for a young man and the footwork needed to poke his nose between defenders and get a quick play the ball. Look for this young tyro's career to blossom further in 2020.

After bursting onto the scene two years ago, AJ Brimson had a mixed 2019 season where he was earmarked for a bench utility role before being shifted around between the fullback and pivot roles. Following the retirement of Michael Gordon, the young speedster looks set for a consistent shot in the custodian role, the position his game suits most. With the freedom of being able to roam around the park, Brimson will be able to use his blistering pace to turn any half chances into big plays.

After making the mid-season move down the M1 from the Broncos last year, Tanah Boyd was handed a taste of the top grade late last year as he came off the bench for his debut in round 24 before starting at halfback in the final game of the season. The young blonde headed dynamo many people north of the Tweed were dubbing ‘the next Alfie' will keep the returning Ash Taylor and fellow halves partner Tyrone Roberts on their toes as he pushes for more games at the top level this year. Boyd has a strong running game close to the line where he can generate great pace when stepping off his right foot and is a gun support player. Look for him to light up the glitter strip once he gets another shot at the big time this year.