Shocking the league with a semi final finish in 2019, the Manly Sea Eagles will be out to continue their resurgence under the watch of club legend Des Hasler.

Tipped by many to make up the numbers following the acrimonious exit of Trent Barrett at the end of the previous season, the return of Hasler - a two-time premiership winning coach - saw the Sea Eagles defy their critics with an inspired brand of football built around getting the best from every player.

Bowing out against South Sydney in the second week of the play-offs under contentious circumstances, the Northern Beaches club showed plenty of class to claim 15 wins from 26 matches - including an all-time great showing with several players unavailable through injury and suspension against Cronulla in the finals.

Retaining the bulk of last year's squad, former New Zealand international Danny Levi is set to take over as the club's first choice hooker following the departure of Apisai Koroisau and Manase Fainu being subject to the NRL's no-fault stand-down policy.

Opening 2020 at home with a Sunday afternoon grudge match opposite Melbourne, the Sea Eagles will be banking on a fast start with six of their first 11 matches scheduled at Lottoland. Spending much of the middle third of the season on the road, a theoretically soft final month will see the side face off against the Knights, Warriors, Panthers and Titans.

Having proved naysayers wrong with a gritty approach to football built around toughness and collective effort, the Sea Eagles will fancy their chances of getting the best of any opponent. Boasting some of the finest players in the league and an emerging crop of toilers willing to rip in every week, a greater share of luck with injuries could see the club reclaim their mantle as ‘Silvertails' of the league.

The Sea Eagles overachieved in many respects last year due to the low expectations of many pundits throughout the league. Making it through to the final six while revelling in their status as underdogs, the side won't be able to fly under the radar after showing their hand as a team capable of knocking off the likes of Melbourne, Canberra and South Sydney. With a new reputation and one of their major attacking threats - Manase Fainu - sidelined for an extended period, the success of 2019 may prove to be a flash in the pan.

Just ten matches at their Brookvale home again this season. The Sea Eagles host the Storm on the first Sunday afternoon of the season and have a mixed opening month, with the Roosters and Raiders among their harder opponents, and bottom eight teams from last year Gold Coast, Warriors and Newcastle mixed in.

There's good news for Manly over the Origin period too, with no games outside New South Wales between Rounds 9 and 18. 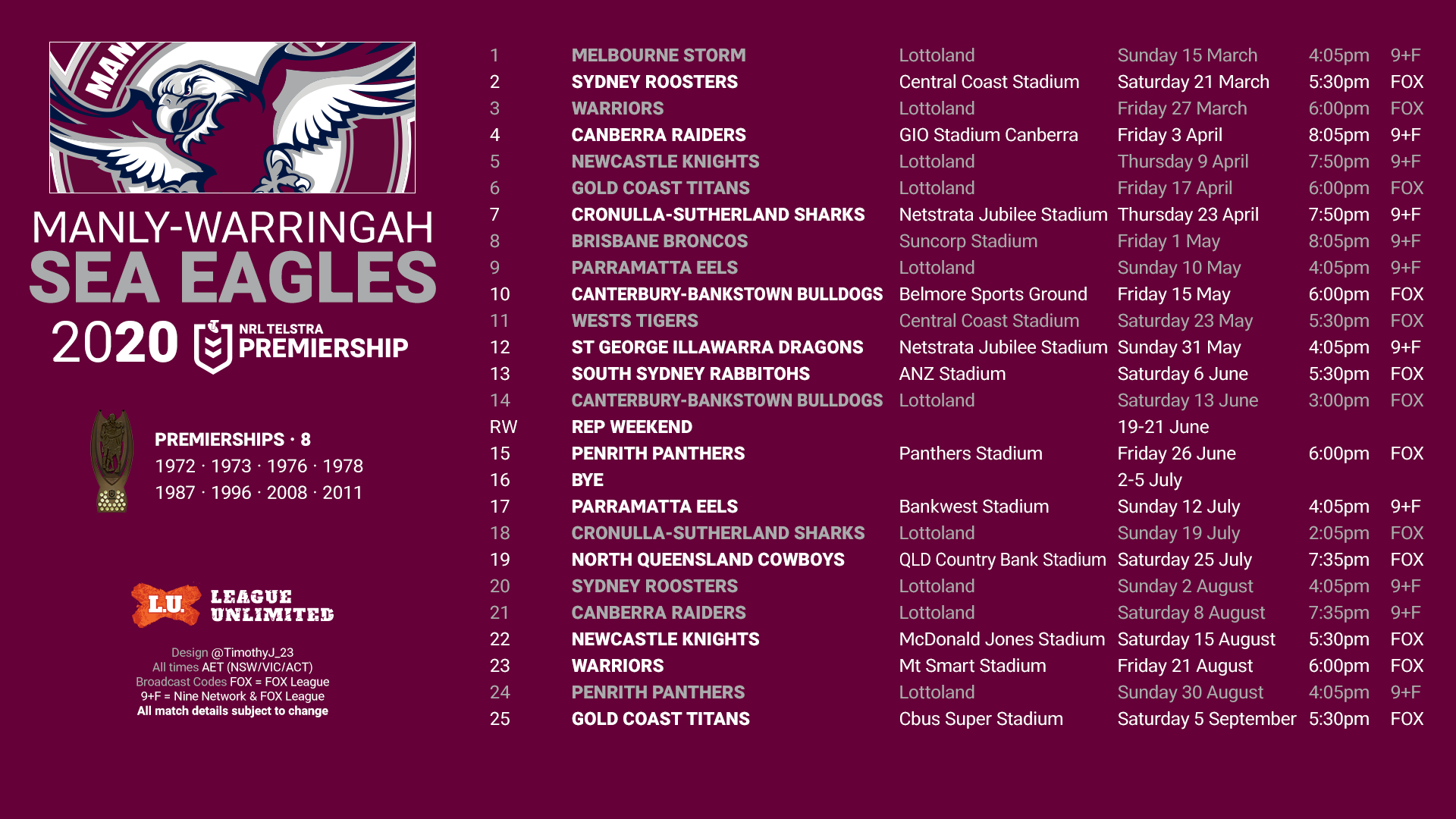 At 23 years old it is frightening to think the best years of Tom Trbojevic are still to come. Experiencing a 2019 filled with fluctuating highs and lows, the superstar fullback only took the field 12 times in a maroon and white jersey, yet such was his influence that the side emerged victorious on ten occasions. Enjoying similar success on the representative stage by becoming only the fourth New South Wales player to score a hat-trick, look for a fully fit ‘Tommy Turbo' to press for Dally M Honours with a season free from injury.

Given a shot at the top grade in the run towards September due to a serious injury crisis, former Australian Schoolboys representative Keppie will be looking to add to his three appearances by cementing a spot on the bench. Joining an exclusive group of players to debut in a finals match, big things are predicted of Olakau'atu with the club contracting the 21-year-old behemoth until the end of 2022.