2020 marks the start of a new dawn for rugby league in North Queensland.

The christening of a new stadium and prized recruit have renewed optimism that the Cowboys will rise up after a couple of lean seasons.

Will they build Queensland Country Bank Stadium into a fortress and the foundation of their success like the Parramatta Eels did last year at Bankwest?

Matt Scott and Scott Bolton have both left, taking with them 515 games of NRL experience - will Michael Morgan stand up and fill the leadership void?

Meanwhile, the arrival of Valentine Holmes leaves Scott Drinkwater and the recently re-signed Jake Clifford fighting it out for the vacant number six jersey.

These are just some of the intriguing storylines surrounding the Cowboys in 2020.

Then, of course, there's the coaching future of Paul Green.

Having steered North Queensland to grand final appearances in 2015 and 2017, another sub-par season would surely spell the end of his tenure.

Despite the departures of Scott and Bolton, North Queensland still possess one of the most versatile forward packs in the competition.

Jason Taumalolo constantly delivers 200-plus running metres each and every game while also posing an attacking threat with deceptive speed and footwork for his size.

Jordan McLean will only get better in his second year at the club.

The addition of young hooker Reece Robson could further take advantage of the roll on the Cowboys typically get up front.

The acquisition of Holmes along with new recruit Esan Marsters should bring spark to what was an ageing backline in recent years.

Meanwhile, breakout star from the NRL Nines - Hamiso Tabaui-Fidow - will be also putting plenty of pressure on veteran outside back Justin O'Neill once June 30 passes and he is eligible to play.

Put together, if they get it right, this is a well-developed roster across the park.

One issue for the Cowboys will be how quickly they can gel in attack.

While change was needed to address the predictable nature of their attack close to the line, the new personnel means new combinations - and they don't always come quick.

Holmes may have played the NRL before but he will have to get used to playing at the top-flight once more.

The same in many ways goes for Robson, who chased the opportunity to be a starting hooker at the Cowboys.

Before he featured off the bench for the Dragons behind Cameron McInnes, playing limited minutes.

He too will need to adjust to the rigours that come with playing big minutes in the NRL week out.

It's big guns blazing for the season opener, with rivals Brisbane coming up the Bruce Highway to help christen their new home in Round 1. They don't have to wait long for a rematch either, with the Round 5 clash at Suncorp coming just under a month later.

As always, the Cowboys will have a glut of travel but have back-to-back home games on three occasions throughout 2020 to alleviate the travel burden, with two of those in the final 7 weeks. Over Origin they have away games in Parramatta, the Gold Coast and Wellington (where they'll face the Warriors), along with home games just after Origin 1 and 3.

The Cowboys' 2020 campaign will wrap up at Leichhardt where they'll face 2005 Grand Final foes the Wests Tigers. 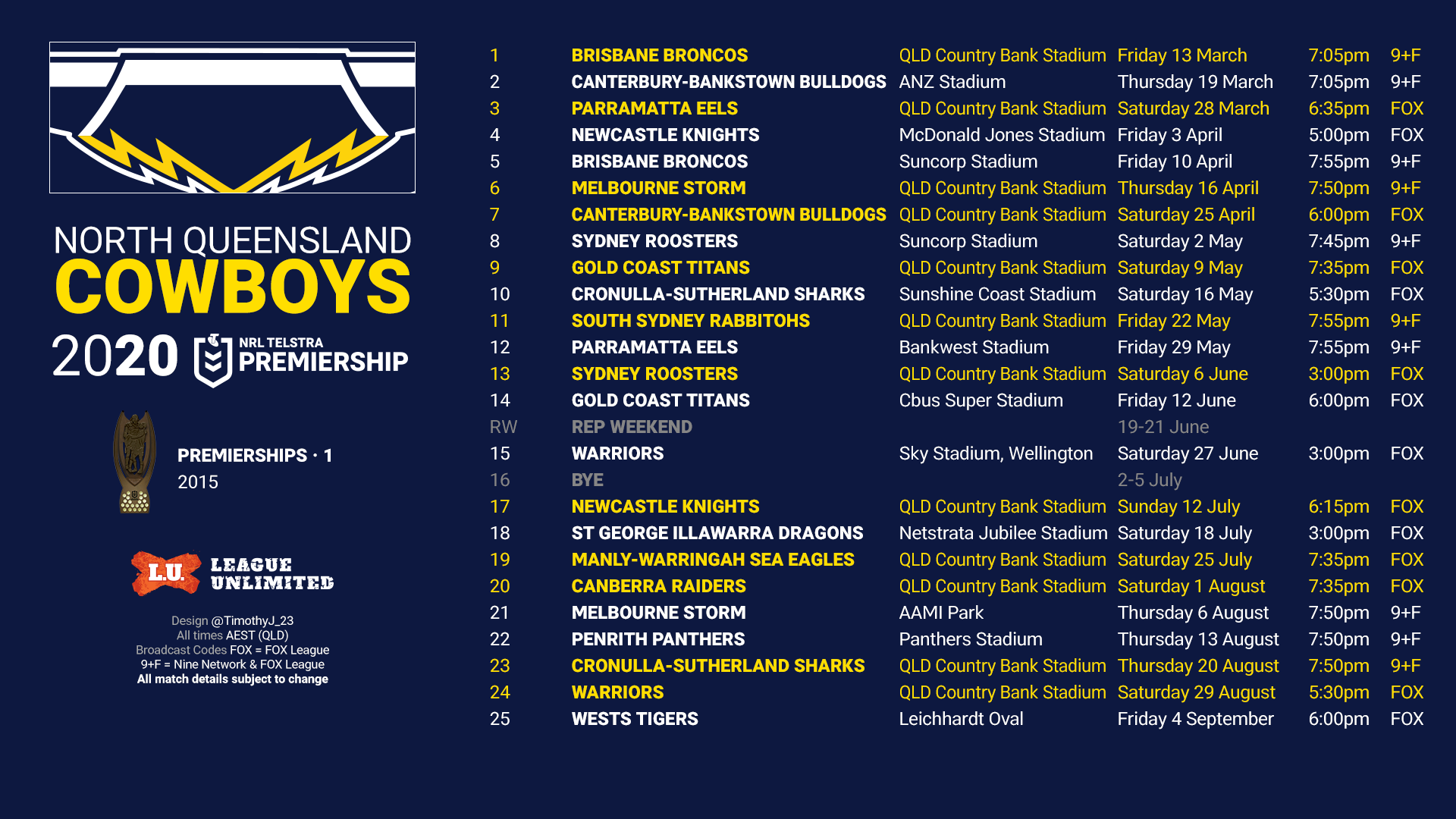 The Cowboys' success will rest on the shoulders of Morgan.

He is the leader of this team but has not been able to reach the heights of 2017, when he carried a Thurston-less Cowboys all the way to an unlikely grand final appearance.

On a personal note, I strongly believe that 2020 will be the year that he gets back to his best.

Another off-season working on his combination with Clifford will prove vital in helping Morgan understand his place in the team better.

The recent form of Drinkwater has cast doubt over who will partner Morgan in the halves but regardless, with a new stadium and spine, it is up to Morgan as the mainstay in recent years to lead from the front.

Tabaui-Fidow is the obvious one having made a name for himself at the NRL Nines.

The Cowboys lacked genuine pace in their backline last year and it made their attack at times predictable, unable to pose a threat of getting on the outside of their opposite men and often resorting to pass instead of taking the line on.

It is unlikely the 18-year old will get a run unless injuries strike. Alternatively, if the Cowboys' backline is failing to fire then he may be the first called in.

But pace alone will not guarantee him a spot in the side, as Gideon Gela-Mosby learnt having now left the club (although injuries did play a large role in hindering his opportunities).