2019 was an absolute season to forget for the Penrith Panthers, with off-field drama both in the boardroom and in the courtroom.

This, along with an attack that was stagnant, didn't help the mountain men in their quest for a fourth straight finals appearance.

For all the pages you could write out about their attacking issues, Penrith's defence was actually pretty safe - conceding just 474 points in the season which put them into the top eight sides defensively.

The Panthers always showed glimpses of form, and their stretch of six wins in a row mid-season showed that their attack and defence could fire when needed. They could beat just about anyone on those occasions and they were able to beat four top-eight sides including reigning (and eventual) premiers the Sydney Roosters.

Moving forward to 2020, Penrith will take a new look into the season, with veteran half James Maloney moving to France, meaning that they need a new halves partner for Nathan Cleary - this choice comes in the form of Jarome Luai, Matt Burton and (after Round 5) Tyrone May, who are all  in the mix to take the #6 jersey.

The Panthers have also moved on representative forward Regan Campbell-Gillard but thankfully been boosted with the signings of Kurt Capewell from the Sharks and Zane Tetevano from the Sydney Roosters.

Across the park the side is stacked with talent, but the question is whether they can show it with consistency - which as a Panthers fan isn't a word that we first think about. The supporter base are right to have concerns about the 2020 season - a rookie half joining an underperforming "star" in Nathan Cleary meaning a lack of points again could be another downfall for the Panthers.

The other issue that they could see is injuries - a regular problem at the foot of the mountains. Already they have been struck by an ankle injury to Dylan Edwards which could have a big effect on the start of the season. If they can stay fit, there's no doubt on their day Penrith can match it with the top sides.

The signings of Capewell and Tetevano will hopefully be a boost to a side that has lacked that consistency in the forwards and second row.

Talent stretches throughout the club thanks to a solid development structure. With Nathan Cleary leading the attack, Penrith can score points rapidly and some of the form that the understrength Panthers showed in their trial win over the Wests Tigers last weekend showed there could be points flowing in 2020.

Add to that, the motivation is there for a better season than 2019.

It's the Panthers. I know that it doesn't sound like a valid reason but at the end of the day the Panthers are a side that promises the world, but delivers an atlas.

They have so much to offer, but their attack and defence go missing in games where they need to perform strongly, and have the habit of letting the big games drop when it really matters.

Penrith start with arguably the hardest draw to open the season, with the defending premiers the Sydney Roosters visiting Panthers Stadium in Round 1. A Friday night trip to Kogarah against the Dragons is the easiest game that the Panthers have in the first 5 rounds with matches against Melbourne, Brisbane and Canberra all packed in that timeframe.

The run gets a fraction easier, but a stretch of six weeks between ANZAC round and Origin I sees them play no games at Panthers Stadium and just one home match which has them on their annual trip to Bathurst.

The latter half of the 2020 season is much kinder than the first half with just two "long" trips - clashes in Auckland and Brisbane, winding down with a Sydney-based final 5 rounds - something that should help them a lot compared to 2019. 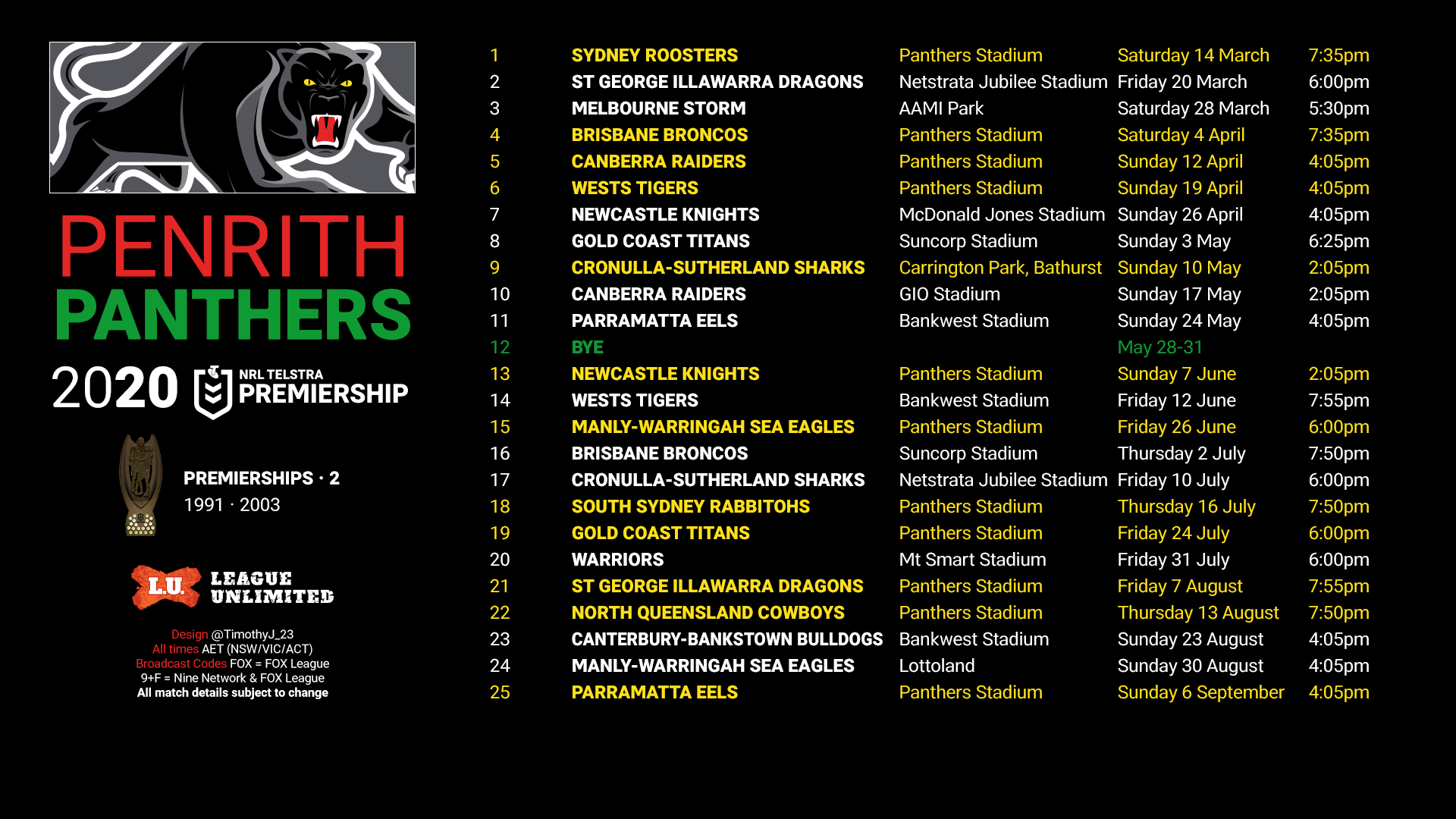 Unsurprisingly, Nathan Cleary is the key player for the Panthers in 2020 after an indifferent season last year.

The Panthers will be needing Cleary to fire so that they can actually score points in a meaningful manner, something which was their Achilles heel throughout 2019. Cleary had moments of brilliance for the Panthers and New South Wales but the lack of consistency and strange incompatibility in strategy with James Maloney was an issue. The Cleary combination with Luai and Burton has already shown success which should be a big boost in 2020.

Matt Burton made a meteoric rise to NRL from SG Ball level in 2019 and the youngster immediately shone in his one and only appearance against the Sharks. Burton possesses a strong kicking game which pairs nicely with Cleary but also has a strong running game, which has seen him make his mark in the lower grades and earnt his call-up to the NRL.