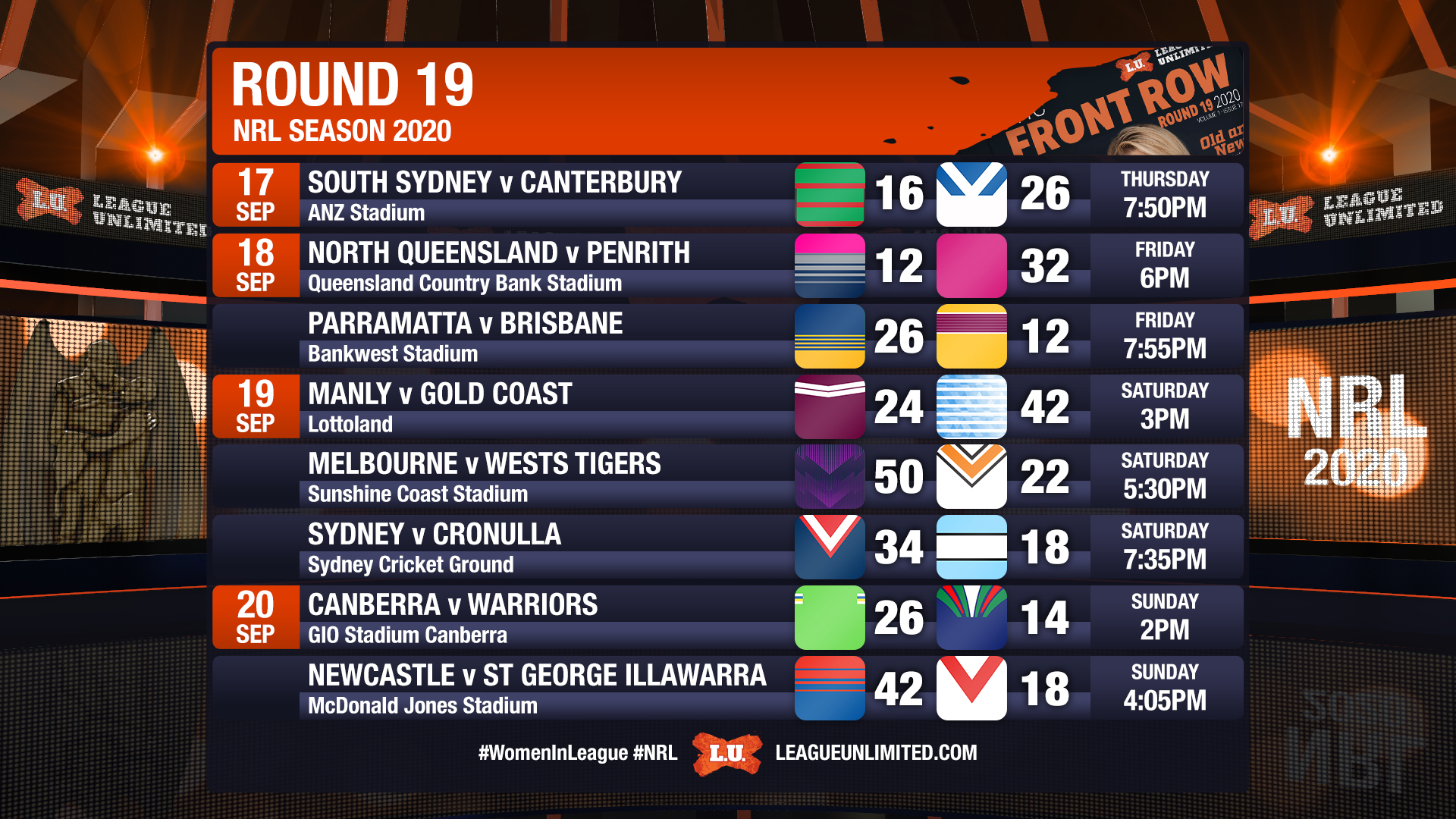 Monday's Expert is here - with the full results from NRL Round 19, along with Match Review charges, LeagueUnlimited.com Player of the Year leaderboard, injury news, crowd and TV ratings info.

Lachlan LEWIS (concussion) might be a concern after Su'A's high shot, and will be touch-and-go for the 'Dogs final hitout with Penrith next Saturday.

South Sydney's loss dents their chances of hosting a home final, with the cardinal and myrtle likely to finish 7th or 8th and travel to Canberra or Newcastle in the opening week. Canterbury are off the bottom of the table for the first time in months, but could return there if Brisbane beat the Cowboys and they can't overcome the Penrith juggernaut next weekend.

Penrith rested three players (Koroisau, Tamou and Tetevano) who are all expected back next week.

Penrith are the 2020 minor premiers. They are locked in to face fourth place - which could be the Roosters, Eels or Raiders - in week one. The Cowboys are just about locked into 14th but could slip to 15th if Brisbane beat them and Canterbury win as well.

David Fifita (ankle) and Tyson Gamble (concussion) were the chief concerns out of this one. Fifita will miss Brisbane's final match of the season while Gamble will be monitored.

While unconvincing, the Eels' win ensures they remain top four. Should they spoil Benji Marshall's farewell game and down the Tigers next Friday, they will secure a double chance. Brisbane have sunk to the bottom of the table for the first time in many years, and have to beat their Queensland cousins in the Cowboys to avoid the unwanted wooden spoon, which would be a club first.

Not a good afternoon at Brookie for either side. Tom TRBOJEVIC is now in doubt for State of Origin and will not play Manly's final round match against the Warriors. Titans pair Corey THOMPSON (hamstring) and Mitch REIN (concussion) both left the field and will be monitored ahead of Friday's clash with Newcastle. Jai ARROW (back) was also a concern.

Neither side can make the finals, so it's all about jockeying for positions. The Titans sit in 9th now, while Manly are 11th.

No match review charges from this match

Melbourne's Suliasi VUNIVALU (hamstring) and Tiger Josh ALOIAI (knee) both failed to finish. Aloiai's season is over with only one round left now, and there is a suggestion he may have done his ACL. Vunivalu will be monitored.

Melbourne have 2nd placed locked up as a result of the win and will host whoever finishes 3rd (Roosters, Eels or Raiders) at Suncorp in Week One, while the Tigers slid from 9th to 10th.

No match review charges from this match

An awful night for Cronulla. Shaun JOHNSON ruptured his achilles and will be hoping to return in early 2021. Royce HUNT and Josh DUGAN both succumbed to knee injuries.

The Roosters are locked in a three-way tussle for third and fourth and with their differential are more likely to ensure a double chance, even if they lose to South Sydney on Friday. Cronulla are most likely to finish eighth, but a win over Canberra next Saturday could get them up to seventh depending on the Roosters-Rabbitohs result.

Canberra remain in the three-way tussle for spots three and four, but sit fifth. If the Eels and Roosters win, the result of their match against Cronulla will be meaningless. The Warriors are 12th.

Lachlan FITZGIBBON (hip flexor) didn't finish the game, nor did Ben HUNT for the Dragons, who picked up a thigh strain.

Newcastle are locked into the tussle in spots 6, 7 and 8 with the Rabbitohs and Sharks, but are clear enough to avoid 8th. They'll want a win to ensure they host in Week 1. The Dragons are likely to end the season in 13th.

Players who are likely or possible to be back for their side this coming week, either via return from injury, resting or suspension.

Crowd figures can be found above in the match results section where available.