The first of our 2020 club season reviews looks at wooden spooners Brisbane and their season from hell.

2019 ended in horror fashion for the Broncos. A 58-0 drubbing at the hands of Parramatta sent them crashing out of the finals.

Little did they know it was only a small taste of what was to come in the next 12 months. It would cost Anthony Seibold his job and see one of the NRL's biggest powerhouses reduced to their first-ever wooden spoon.

Brisbane won just three games - two of those coming before the COVID-19 lockdown with the other one being a victory over the 15th-placed Bulldogs.

34-6 and 59-0 losses to the Eels and Roosters to begin their season post-lockdown would foreshadow an embarrassing year at Red Hill where records tumbled - but not in the right direction. Their 31.2 points conceded per game were the most on average by any past Broncos team.

There was laughter… later followed by tears. But it did not seem to matter how the playing group reacted. With each loss came more pressure and Seibold succumbed to it, eventually parting company with the club in the latter part of the season and handing control to assistant Peter Gentle. 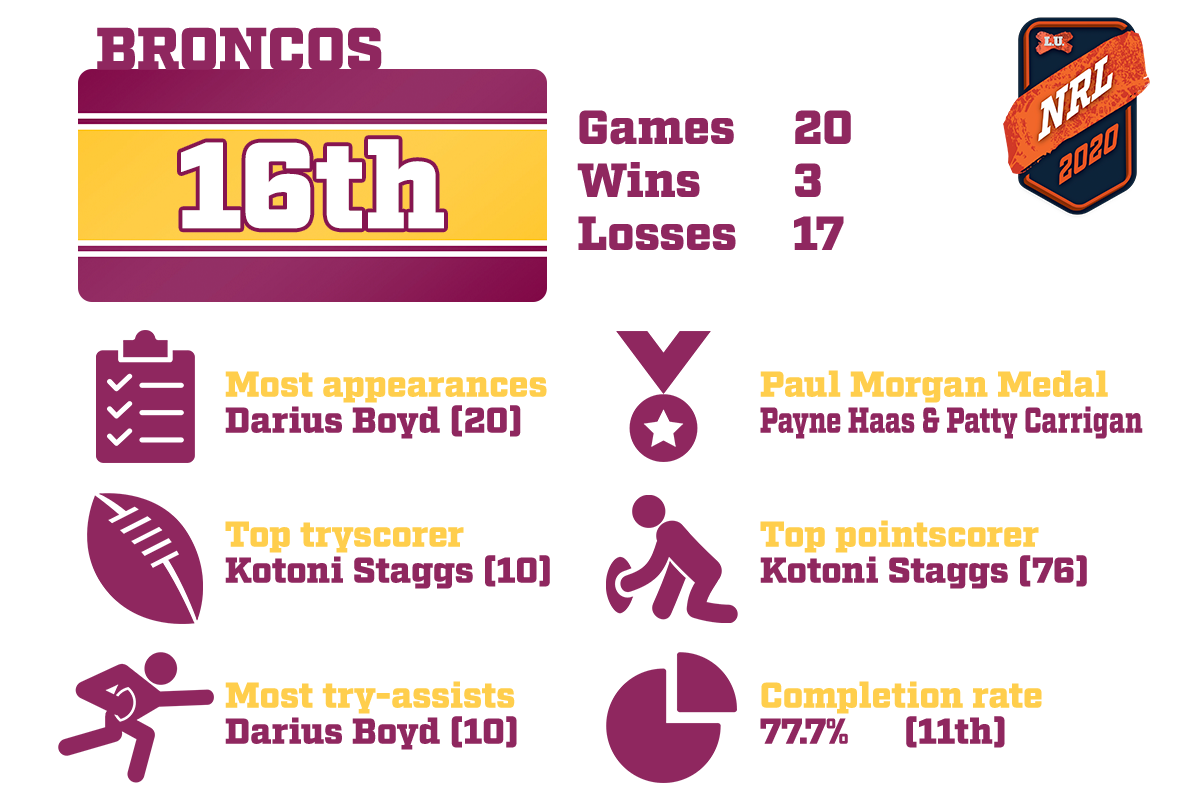 The clear turning point has to be the COVID-19 lockdown. Before that Brisbane were storming towards premiership favouritism off the back of two-straight wins over the Cowboys and Rabbitohs. They won just 1 of their remaining 18 games to finish the season.

At that point the Broncos had a host of players on the sideline. Skipper Alex Glenn (leg), David Fifita (knee), Jack Bird (knee), Tevita Pangai Jr (suspension) and Kotoni Staggs (suspension) were all unavailable for the Round 4 loss to the Roosters.

Without the adequate experience or mental resilience, the Broncos were never truly able to recover.

Obviously the first two weeks of the season but what was different there to the disaster that followed? Looking at the statistics - the clear discrepancy is the advantage Brisbane were able to build up front. In the wins over the Cowboys and Rabbitohs, four and five Broncos forwards topped the century in running metres respectively. They were only able to match those same type of figures in a win over the Bulldogs and losses to the Raiders and Dragons, with the majority of the metres coming in their strong first half against Canberra.

The dominance of their forward pack also allowed Milford the space to roam and show his footwork and skill like he did in a scintillating solo try against the Rabbitohs. Croft also had two try assists and one linebreak assist in the opening round win over the Cowboys. He was playing with confidence but went on to record another two try assists and three linebreak assists from 13 games. The power game up front is crucial to Brisbane's success and disappeared after the return to play.

Lots. First there were the confusing selection calls that were somewhat masked by injuries at the club. Shifting Darius Boyd to the centres and Corey Oates to second row. Cory Paix, seen as a future halfback, was made a hooker while Tesi Niu played at fullback instead of his preferred role in the centres.

Tom Dearden struggled for game time while Brodie Croft and Anthony Milford struggled full stop. Jamayne Isaako jumped between winger, fullback and the interchange. The Broncos had serious communication problems in attack and defence and the constant chopping and changing did not help nor did the leniency in not dropping underperforming big-money stars which reportedly left others in the dressing room confused.

There was also the serious lack of hard edge up front. For all the excitement and hype surrounding Brisbane's forward pack was a glaring weakness. There was no real leadership there. It was primarily a young group and even Kotoni Staggs himself said he was looking for one of the more experienced teammates to show him the way. No one was able to do that.

For all Brisbane's struggles up front, there were two forwards who were always leading the way when the rest wouldn't - Payne Haas and Patrick Carrigan.

It says a lot about the leadership void that two of their youngest and more inexperienced big men were the ones doing the heavy lifting. Much was made of a lack of effort and desire at the club but Haas and Carrigan never failed to cart the ball up with plenty of punch, even if down on the scoreboard by 50. The pair averaged 175 and 156 metres respectively and while they at times came up with some lazy efforts in defence it was never out of not trying.

Most times it was a product of physical exhaustion and Haas is now looking at a reduced on-field role next year as his minutes are scaled back.

A shining light in an otherwise dismal season, Herbie Farnworth showed immense loyalty to put off a number of offers from different codes to re-sign with the Broncos. Farnworth has all but locked up his long-term spot in the backline and it hasn't necessarily been pure natural talent that has got him there.

He has obvious potential but it is Farnworth's effort areas that have stood out in a side struggling for motivation every week. He fights for every metre and his dedication was evident in the fact that after a thumping loss to Melbourne with his contract negotiation not sorted, Farnworth reportedly went into the distraught dressing room and declared "I want to stay loyal and help turn this around."

There are big decisions to be made by incoming coach Kevin Walters. Jack Bird is already gone but he is expected to be the first of several underperforming stars to be cut loose. Matt Lodge's future is up in the air while patience is wearing thin with Milford, although Walters believes he is in the man to rediscover the playmaker's potential.

There will be no David Fifita either but Jordan Riki has been earmarked as a possible replacement and showed his explosive power with a sensational solo try against Penrith.

The hope is that Walters can restore pride in the club's successful past and translate that into a fruitful future. It won't be as disastrous as 2020 but the Broncos are still going to struggle to make it back into the top eight with a spine that still lacks clear roles and direction.