Wings clipped by injuries and inexperience

Having defied expert predictions to make the second week of the finals in 2019, many expected the Sea Eagles to challenge for the 2020 title.

While Koroisau re-joined the Panthers, Fainu failed to lace on a boot - stood down under the NRL's no fault policy following off field charges.

Former Knight Danny Levi filled the gap and with four wins after six rounds, the seventh placed Sea Eagles were poised for takeoff. From there, a crippling injury toll exposed a lack of depth and with just another three victories over the remaining 14 weeks, Manly rounded out a year to forget in 13th position.

Wins over eventual finalists the Roosters, Raiders and Eels were highlights in a season that included only one victory at the club's spiritual homeground - the worst return in Manly's history dating back to 1947. Adding to the woes, the postseason departures of Joel Thompson (St Helens) and Addin Fonua-Blake (Warriors) leave a considerable void and sadly for fans, injuries robbed the duo of the standing ovation they so richly deserved. 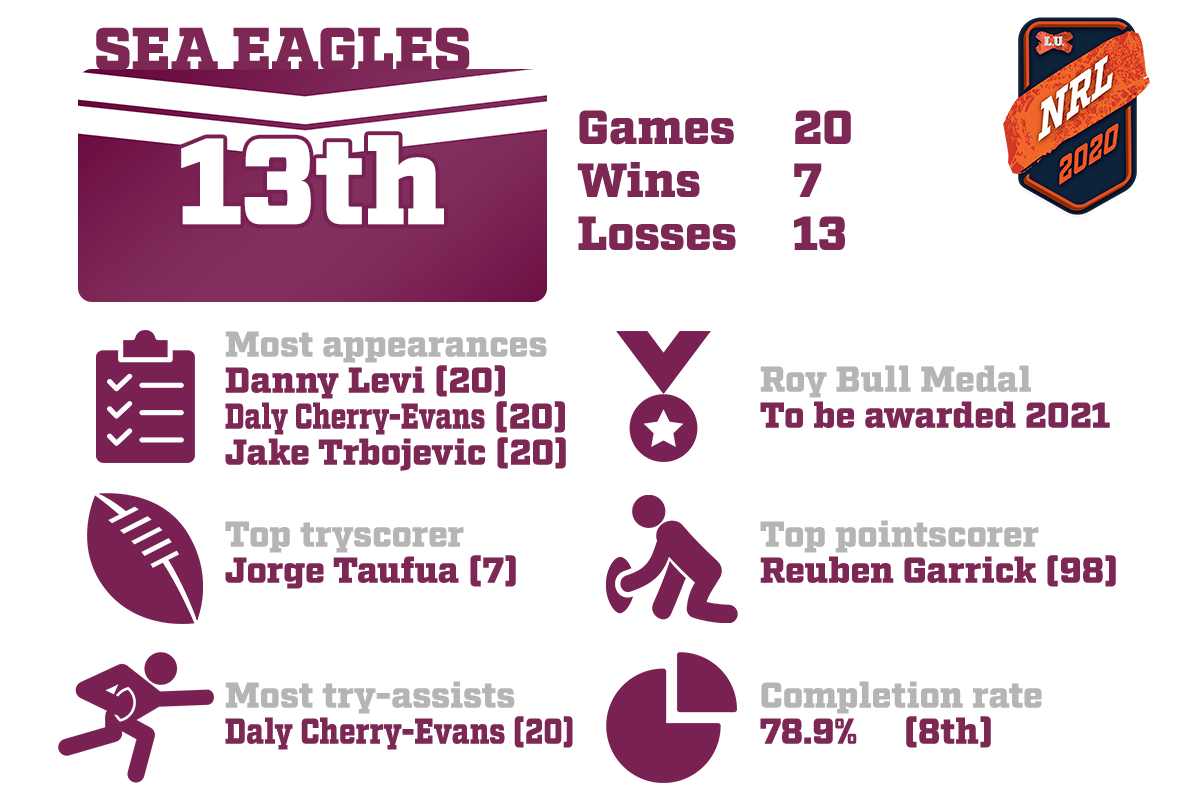 In a wicked twist of fate, the best and worst of Manly's season struck simultaneously on a Sunday afternoon against Canberra at a COVID sparse Campbelltown Stadium.

Following early injuries to Dylan Walker, Brad Parker and Tom Trbojevic, an undermanned Sea Eagles inspired by a miraculous try saving tackle from Curtis Sironen continued to repel raid after Green Machine raid to protect a narrow lead in what ranks among the club's most stirring victories.

That was round six, and like Trbojevic and Walker the Sea Eagles never recovered, and as the injury list lengthened so did Manly's distance to the top half of the competition.

Short of being labeled a one-man team, the early blast of Tom Trbojevic clearly worked in Manly's favour. With and without the ball, the fiercely competitive Sea Eagles junior carried the side to its first three victories. And with his hamstring on ice before the end of round six, Turbo had already done enough to top the Dally M leaderboard.

With only 27 games between them, the prolonged absence of Tom Trbojevic, Moses Suli and Walker saw the points dry up. For Reuben Garrick the loss was notable, a meagre four-try return a staggering 12 shy of the winger's 2019 tally.

And with the rotation of names, the defensive steel forged a year earlier began to corrode. Often exposed on the edges, it was a turnstyle-like final six rounds at a whopping 37 points per game that eventually brought Hasler's men to their knees.

One of only four players to turn out every week, skipper Daly Cherry-Evans was the Sea Eagles' rock in a season where the dugout seated more big names than Manly registered victories. Finishing on 9 Dally M votes alongside Tom Trbojevic, the Queensland captain's persistence eventually paid-off when his man of the match performance in Adelaide guided the Maroons to an unlikely win.

Three rookies cracked the top flight throughout the season. Tevita Funa, Albert Hopoate and Josh Schuster each took their chance in the absence of regular backline talent.

Making his debut on the wing, Funa crossed the stripe in each of his first three appearances before delivering his best at fullback to take out the Manly Rookie of the year award.

Confident 19-year-old Schuster failed to finish his only appearance, but the five-eighth showed enough against the Tigers for Benji Marshall to say it's the best debut he's ever seen. While out wide, midseason Bulldogs recruit Morgan Harper showed what all the fuss was about, dazzling opponents with fancy footwork to score three tries in just four outings.

Kieran Foran remains Manly's most noticeable signing, and with Levi unsigned and Fainu's availability under fire, there's talk the 30-year-old may return in the unfamiliar number-nine. With an otherwise competitive lineup, the race for a reliable hooker could ultimately shape Hasler's finals destiny.

Manly's best side for next season, based on current signings: