An incredible year for the 2020 success story of the NRL

The COVID-19 break couldn't have come at a better time for the New Zealand Warriors who only managed to score a solitary try in their opening two fixtures - whilst conceding 40 points.

Thankfully, their first match after the break saw them convincingly knock off the St. George Illawarra Dragons by 18 points. The Warriors surprised many pundits this season and looked a much better side once Stephen Kearney parted ways with the club and Todd Payten took over the side in Round 7. Results-wise though, it wasn't the greatest start for Payten with just the one win in his opening five matches as coach, but his fortunes changed when the Warriors went on to win four of their next five matches as they raced up the premiership ladder in the second half of the season.

The Warriors defied pre-season expectations with their 10th placed finish after finishing with eight wins from their 20 matches this season, which included two wins over Manly Warringah and a 30-point drubbing of the Newcastle Knights. These performances are unbelievable when you consider the sacrifice that the Warriors had to make this to ensure that competition resumed in May. The whole side was forced to move to Australia and live in a bubble, many without seeing their loved ones for months on end. It's a testament to the Warriors and their increcible strength to be able to perform in such tough conditions during the 2020 season. 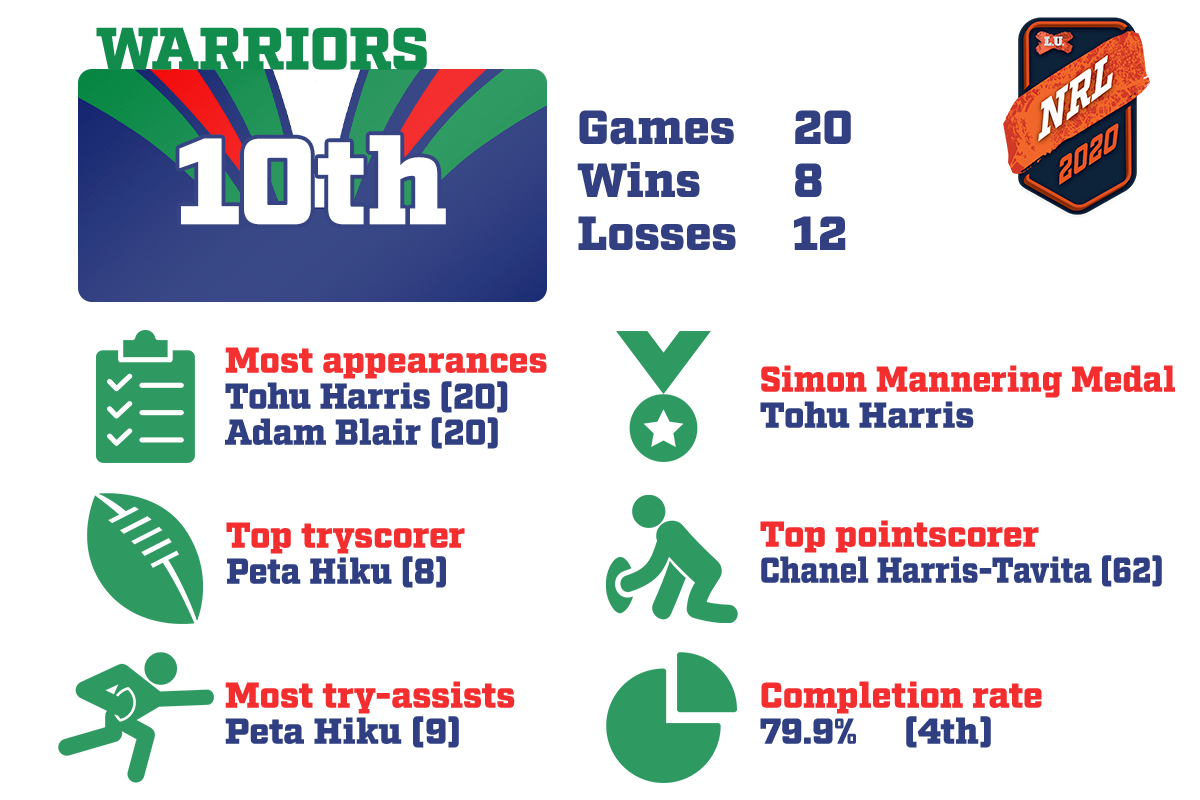 The Warriors continually managed to grab the odd win every two or three weeks during the opening 11 rounds of the campaign but their luck changed in round 12 with a six point win over the Wests Tigers which saw the New Zealand side for on a run, winning four of five matches as they marched up the table, sitting in 9th heading into round 17. During this run the Warriors managed to knock off the Tigers, Manly Warringah, Newcastle and Canterbury, with their sole loss coming against minor premiers Penrith.

Despite this, the Warriors were able to win all seven matches against the teams that placed below them on the ladder and this proved to be the key to finishing ninth this year. If they failed to win even one of those contests, they could've very easily slipped down to 12th or 13th so it's a credit to the Warriors during this tough season.

In contrast to the things that worked for the Warriors, their biggest struggle this year was their inability to compete with the better sides in the competition. One win from 13 matches against the top nine isn't exactly something to be proud off and the Warriors will be hoping to improve on this for the 2021 season. This included big losses to the Melbourne Storm, Cronulla-Sutherland Sharks and the South Sydney Rabbitohs.

Two of the Warriors players stood above the rest during the 2020 season and they are Roger Tuivasa-Sheck and Tohu Harris. Firstly, Tuivasa-Sheck once again proved that he is one of the best fullbacks in the competition despite his lack of tries during the season. The New Zealand fullback averaged 220 run metres and a massive 4.7 tackle breaks per game. Not only was he excellent on the field but 'RTS' was the perfect leader for the Warriors during this troublesome season and he handled the situation brilliantly whilst making sure his boys were ready to compete week in, week out.

Back rower, Tohu Harris had an outstanding season. After an injury interrupted 2019, Harris made his presence known averaging career highs in both run metres (173 per game) and tackles (42.2). Harris was named in the 2020 Dally M Team of the Year for his exceptional performances and still at 28 years of age, expect plenty more from the Second Rower of the year in 2021.

Two of the Warriors rookies that stood out in 2020 were Eliesa Katoa and Jamayne Taunoa-Brown. Both forwards made their debuts against the Newcastle Knights in round one. Katoa appeared in 13 games this season and averaged 99 run metres and made 27 tackles per game in his rookie year, solid numbers for a first-year player. The backrower looked dangerous close to the line and finished the season with six tries to his name, which included a double in the final game of the season against Manly.

24-year-old Taunoa-Brown appeared in 19 of the 20 games this season and proved to be a reliable option in the front row. Taunoa-Brown averaged 95 run metres and 27 tackles per game in roughly 35-45 minutes of football, proving that he likes to get through a lot of work once he's on the pitch for the Warriors. A bit of an older rookie but they'll be some big things to come from him next year.

The Warriors will enter the 2021 season with former NRL coach Nathan Brown at the helm with Phil Gould working with the club in some capacity. Brown will have some exciting players to work with as the Warriors have managed to sign Euan Aitken, Kane Evans, Addin Fonua-Blake, Marcelo Montoya, Ben Murdoch-Masila, Sean O'Sullivan and Bayley Sironen. The addition of Fonua-Blake is immense for the Warriors, who proved this year at Manly that he was one of the best back rowers in the competition.

On paper, the Warriors' squad has improved compared to the 2020 roster. But we'll have to wait and see how they all gel together. Having said that, I think finals football is just out of reach for the Warriors and I think anywhere from 9th-12th is a fair expectation for their 2021 season.