Promising signs for the future

The Gold Coast Titans may have missed out on the finals in 2020, but if things continue to improve a return to the top eight looks set to be right around the corner.

Making huge in-roads from the team that claimed the wooden spoon twelve months earlier, the Titans won nine matches to finish in ninth position under the coaching of NRL newcomer Justin Holbrook.

Beginning the season slowly with losses in their first three matches, the side tasted victory for the first time in a year with an upset over the Tigers (28-23) in June. Managing occasional wins against the Broncos (30-12), Warriors (16-12) and Cowboys (30-10) over the first 15 weeks, a run of five consecutive wins saw the side close out the year as one of the form teams of the premiership.

Having enjoyed success in the lower grades at Canterbury before winning a title with St Helens in the English Super League, Holbrook revitalised the club's underperforming roster by parting ways with underperforming stars, while giving a number of young players an opportunity to prove their wares in the top grade.

Heading into next season with plenty of expectation after securing the signatures of David Fifita and Tino Fa'asuamaleaui on big money deals, the Titans will be hoping to continue their strong finish and secure a finals berth for the first time since 2016. 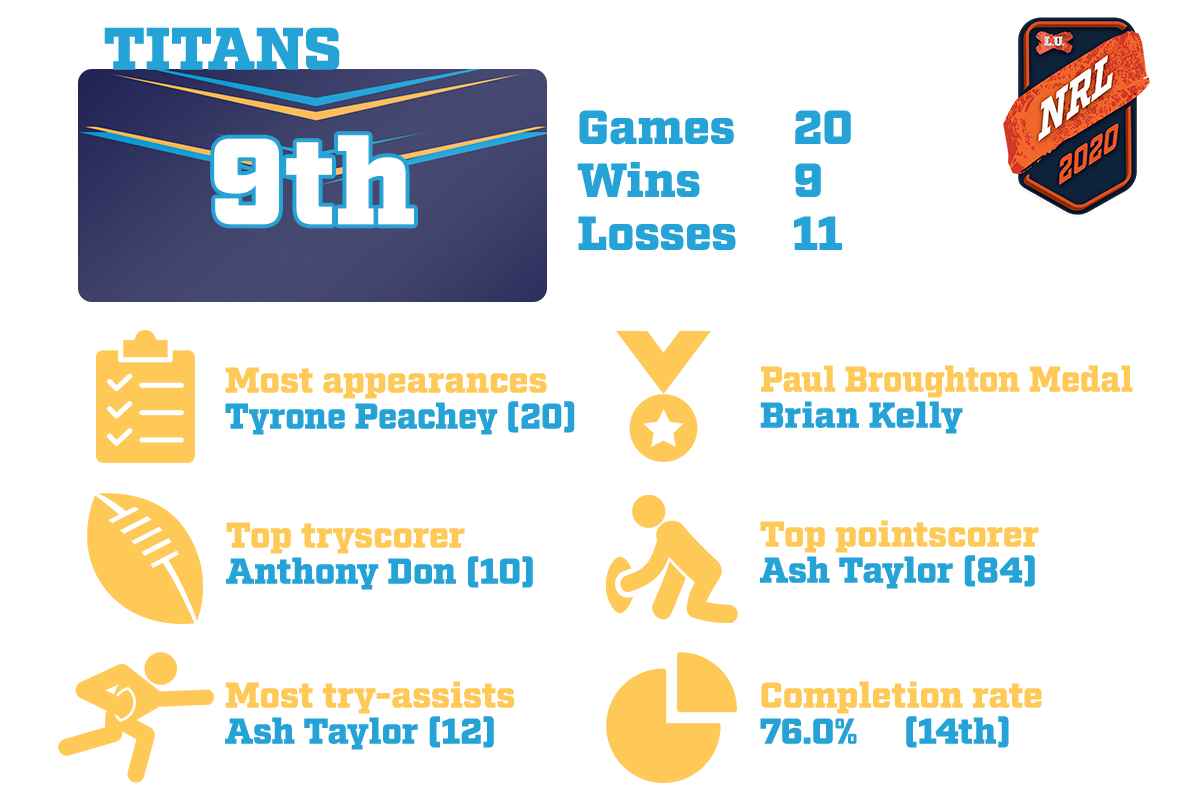 While success wasn't immediately forthcoming upon the season resumption, Holbrook's decision to hand Jamal Fogarty an NRL lifeline paid off in the long run. Playing two matches with the Titans in 2017 before spending several seasons in the Queensland Cup with Burleigh, the 26-year-old halfback provided a steadying influence for the team while enabling much-maligned playmaker Ashley Taylor to regain his confidence as a second receiver. Forming a potent combination that saw the team finish the season two points outside the top eight, the unexpected partnership propelled the club to a record five consecutive victories.

Beginning the year as heavy favourites for the wooden spoon, the Titans were one of the few teams to get better as the season wore on. Losing nine of their first 12 matches, including heavy defeats against Parramatta (46-6), North Queensland (36-6), Cronulla (40-10) and Melbourne (42-6), the side took the results in their stride while identifying areas in need of improvement. Stiffening their defence and gaining the confidence to spread the ball from within their own half in attack, the final eight rounds saw the side claim six wins in a drastic transformation from the team that began the year as mentally weak and defensively inept.

While the Titans received great service from a number of low-profile players, such as Jamal Fogarty and Jaimin Jolliffe, several big name stars failed to deliver in 2020. Touted as marquee signings under previous regimes, Shannon Boyd (1 game), Kallum Watkins (2 games) and Bryce Cartwright (7 games) all departed the club mid-season, while experienced playmakers Tyrone Roberts (3 games) and Nathan Peats (8 games) were moved on in favour of youngsters Tanah Boyd (13 games) and Erin Clark (10 games).

Suffering a back injury that threatened to sideline him for the entirety of 2020, AJ Brimson made an enormous impact during the second half of the season. Providing an injection of class and danger with the ball in hand, the 21-year-old fullback produced seven tries, 30 tackle breaks and 165 metres on average. Named in Wayne Bennett's 27-man squad for the post-season Origin series, Brimson seized upon the withdrawal of Kalyn Ponga to play a vital role in the Maroons' game one victory in Adelaide.

Elevating three players into the NRL during a difficult first half of the season, Jaimin Jolliffe, Beau Fermor and Treymain Spry featured prominently in the side's strong finish to the year. Beginning 2020 on a train-and-trial deal after a number of seasons in Canterbury Cup NSW with Newtown, Joliiffe made 16 appearances in the front-row to earn an upgraded contract. Making the most of his opportunity to play first grade due to an abundance of second-rowers at Newcastle, Fermor showed the versatility to play in the forwards and backs in eight matches. Returning to Queensland after starting out in the lower grades with the Roosters, Spry grew in confidence over his five matches to emerge as an outside back of the future.

Touted as the biggest improvers for 2021, the Titans will need a strong start built around defence to ensure the hype around Fifita and Fa'asuamaleaui doesn't derail the year before it begins.

Based on current signings, this is what their best lineup for next year looks like: