Andrew Ferguson looks at the 2020 campaign that saw Cronulla finish exactly in the middle of the NRL ladder.

Cronulla became the first club in the history of the competition to the finish the regular season with perfect parity on the ladder. They had 10 wins, 10 losses, scored 480 points and conceded 480 points. They were the epitome of average, yet it was enough to see them secure 8th place on the ladder and make the finals for the 6th consecutive season.

The club moved out of the Gallen-Flanagan era playing some - at times - brilliant attacking football, as Shaun Johnson started to take control of the side and play some good footy. The Sharks' wingers capitalised on the halfback's improvement, with 28 tries scored between Ronaldo Mulitalo (12) and Sione Katoa (16). Sadly for Johnson though, he injured his Achilles late in the season and he could miss a chunk of 2021 while recovering.

Blayke Brailey grew in confidence every week at dummy half following the departure of older brother Jayden, and became one of the first picked every week, while a number of talented young forwards stepped up and demanded to be picked, notably Royce Hunt, Siosifa Talakai and Toby Rudolf.

Their finals campaign was brief as they went down 32-20 to the Raiders in the first week, but they were far from disgraced. 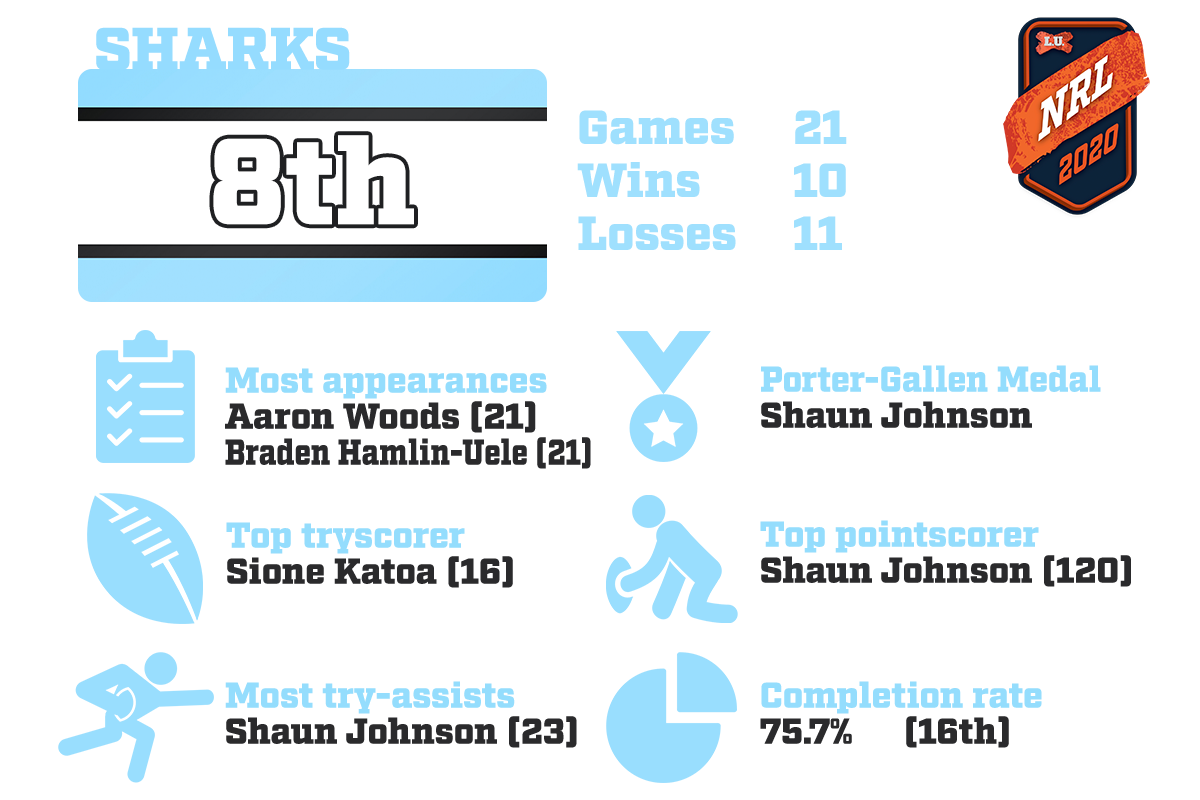 Round 7 - The Sharks struggled at the start of the year, winning just 1 of their opening 5 games. In Round 6 they barely beat the lowly Bulldogs. In Round 7 they came up against the 7th placed Manly, a side they have struggled against since forever.

Cronulla though turned on the attack at Gosford that day, racking up 40 points to start a run of 6 straight games where they scored at least 24 points every week - five of those resulting in wins - which saw them jump from third last to 6th place. They remained in the top 8 for the remainder of the season.

Edge attack - The Sharks were potent out wide and on the edges of the ruck on both sides - thanks largely to the improved form of Johnson, the confidence from dummy half by Brailey and a great bench rotation which saw some big bustling bodies create a heap of opportunities against tired defences.

Middle defence - Cronulla had too many tries scored through the middle of their defence, especially close to the line. They were slow to move laterally, sometimes too flat-footed and easily picked off by attackers running on straight lines or using late footwork.

Shaun Johnson was greatly improved in 2020, creating a huge number of opportunities and setting up a swag of tries for his outside men. Blayke Brailey was also brilliant, going from young rake to attacking leader, seen best by his try just before halftime against Canberra in the final. Cronulla lead 14-10 at halftime, but with Brailey missing for the second half, the Sharks attack was definitely missing a key component and were outscored 22-6 in the second half.

Coach John Morris continued his routine of bringing through young talent, with another 5 players making their NRL debut for the club in 2020. Jackson Ferris made a good impression in his only appearance, scoring a try against the Broncos. Young half Braydon Trindall looked right at home in the halves, a real livewire who took to being an attacking leader immediately.

Another 3 forwards got their opportunity in 2020 - Toby Rudolf who looks to be a real handful in attack, but still has some errors in his game that will be rectified with experience, Teig Wilton who looks to be a good prospect in the back row and young prop Daniel Vasquez who will make a handy addition to their forward rotation in 2021.

Half of the Sharks spine was brilliant in 2020 - Johnson and Brailey. Fullback William Kennedy had a solid year and will be better for the run, while halfback Chad Townsend was underwhelming for much of the year. The emergence of Trindall and Connor Tracey will put huge pressure on the Premiership winning halfback to retain his place.

The club will be without back rower Jayson Bukuya, who decided to retire early in the season, while fellow second rower Scott Sorensen is off-contract. Talented centre Bronson Xerri copped a lengthy suspension after testing positive for performance enhancing drugs.