"If we score, we might win. If they never score, we can't lose." Christie Rampone, former captain of the US National Women's Soccer Team.

The cliché still rings true - regardless of the sport - that offence wins games, and defence wins championships.

Certainly, Parramatta Eels coach Brad Arthur must subscribe to a similar mantra, as his focus from the 2019 season shifted to forming a solid defensive pattern.

After finishing the 2019 home and away season in 5th place, the Parramatta Eels faithful were excited to welcome forwards Ryan Matterson, and Reagan Campbell-Gillard, to the team, and to see how much further they could help push the side.

The erratic Eels trounced Brisbane in week one of the Finals 58-nil, and were subsequently demolished 32-nil the following week by a clinical Melbourne Storm outfit - surely, with the addition of some very good players, the future was beginning to look bright at Bankwest...

The 2020 season got off to a flying start for Parramatta, as the Eels found a new steel in their defence, and won their opening five games, to find themselves atop the NRL Premiership ladder.

Throughout the five-match winning streak, Parramatta produced the best defensive effort in the NRL, conceding only 40 points across 5 games, while managing to pile on 123 points.

Week 6 saw the defending Premiers, the Roosters, come to Bankwest, and the classy Eastern suburbs outfit flexed their considerable Premiership muscles, and ran out victors to the tune of 24-10.

The following 8 weeks followed a familiar pattern - three consecutive wins, followed by a loss, as the Eels defeated the Raiders, Cowboys, and Knights, and then lost to the Sea Eagles, and then beat the Tigers, Bulldogs, and Sharks, only to be defeated by the Dragons.

Across that 8-week period, the Eels still defended stoutly - they conceded merely 112 points over 8 weeks, while managing to score 165 points.

Over the next six weeks, Parramatta would lose only 2 of their remaining games, managing to clinch third spot on the NRL Premiership ladder.

Week one of the NRL Finals saw a valiant, under-strength Eels outfit outclassed 36-24 by Melbourne, and the following week saw a similar result take place, with the Eels losing to a motivated Rabbitohs side 38-24, to end their 2020 campaign.

Despite what many would consider a disappointing straight sets Finals exit, the Eels showed great improvement in 2020; they managed to reduce their points conceded by 39.12% (down to 288 points conceded, as opposed to 473), lost only five games in the regular season (compared to ten losses in 2019), and lead the NRL for offloads.

The platform for the future was set in 2019, and season 2020 saw the beginning of the future to take effect. 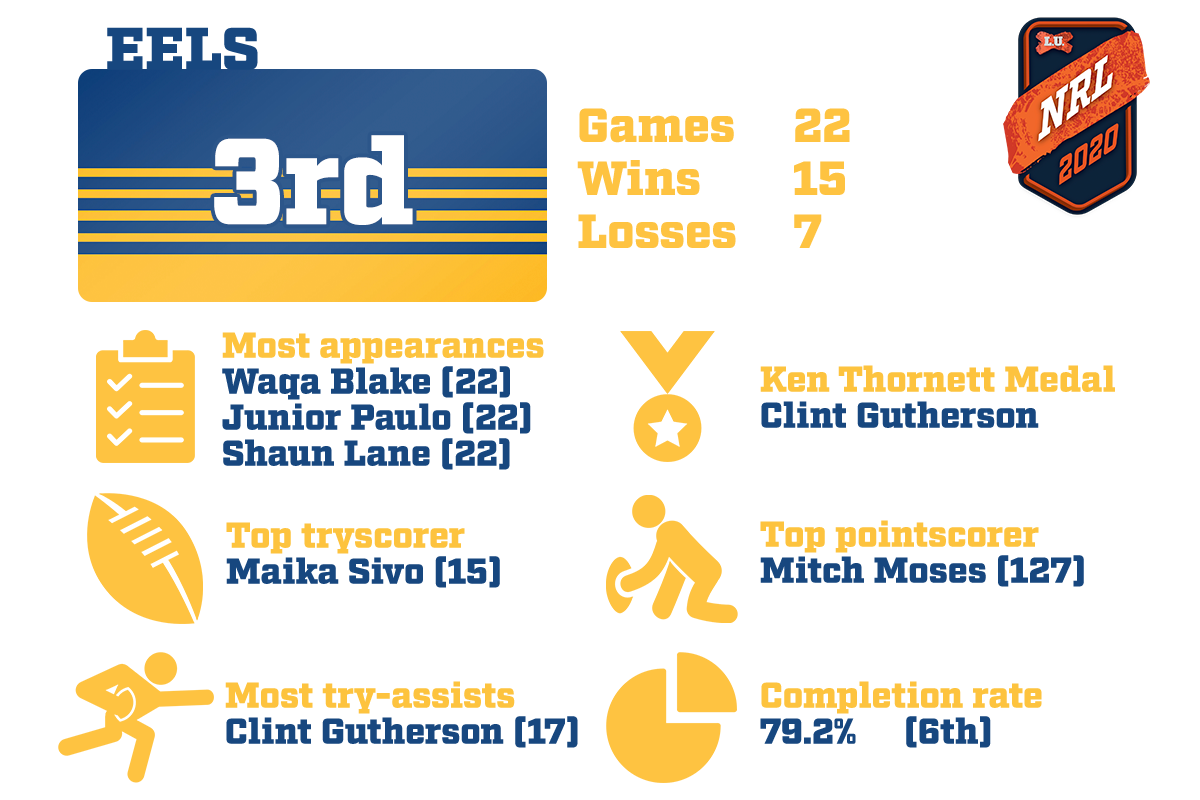 It would be easy to point to the March 23rd decision to suspend the season as a turning point, but perhaps there may be some merit in this notion; the 2020 Eels based their success on playing an up-tempo, aggressive forwards-dominated game, and relied on their power, and skill, to get over the top of their opposition.

This tactic proved useful early on in the season, where the Eels won 8 of their opening 10 matches; however, as the season wore on, the Eels' forwards seemed to be less dominant than they had been earlier in the year, and questions arose as to whether they peaked too soon, or simply trained (and played) too hard, too early on in the season, and fatigue became a factor.

Parramatta's round 8 clash with the Cowboys - won 42-4 by the Eels - seems to be one of their biggest turning points, as this was the last time in season 2020 that the Eels scored more than 30 points.

The Eels' enthusiasm in their scrambling defence, as well as their determination to shut down dangerous plays by having their wide men jam in, worked wonderfully well in 2020 - realistically, only Penrith, and Melbourne, conceded fewer points than the Eels in 2020.

The Eels' game plan of using their big, mobile, skilful forwards to bash their opponents out of the game worked superbly - Reagan Campbell-Gillard routinely ran for 200m+ a game, and was ably supported by Junior Paulo, Nathan Brown, and Ryan Matterson.

The Eels popped more offloads than any other team in 2020, and they were able to use second phase play to put pressure on their opponents.

Mitchell Moses started 2020 in brilliant touch, kicking goals with ease, laying on plays, and seeming like the only viable alternative to Nathan Clearly at halfback for NSW.

However, after injuring his calf muscle against the Raiders in round 7, Moses did not seem to regain full fitness, or his full self-belief, and the Eels' attack stagnated; Parramatta were still able to march downfield with relative ease, but the Eels' playmakers struggled to create opportunities for their side.

Parramatta's use of their bench was also a big talking point of 2020 - after Nathan Brown, Ryan Matterson, Reagan Campbell-Gillard, Junior Paulo, and Shaun Lane had set a strong platform in the opening 20 minutes, Campbell-Gillard, Paulo, and Brown would often go back to the bench for a breather (often all at the same time), and Parramatta's bench forwards were unable to continue the momentum going.

By the time Parramatta's starting bookends, and their lock, were thrust back into the action, it was sometimes too late to wrestle momentum back to the Eels' favour.

The only Eels rookie to debut was the Wests Tigers-bound Stefano Utoikamanu, and he played only 3 appearances.

Haze Dunster had the dubious honour of debuting in the Final against South Sydney, and he had a mixed bag, making a bad error which lead to a Souths try, but showing promise with the ball in hand.

Mitchell Moses started the 2020 season solidly; he was not in the terrific form we saw from him in 2019, but he was consistently dangerous, kicking goals from everywhere, and being a little pest in defence.

After his calf injury, his form waned; he didn't run the ball as much (arguably, his greatest strength), and his goal-kicking suffered a decline in accuracy, as well.

But the injury affords him some slack; it is expected that, after recovering completely in the off-season, that the 2019 version of Mitchell Moses will be seen again in 2021.

Waqa Blake was lambasted from pillar to post on a weekly basis, for his poor defensive reads, and at times, atrocious defensive technique.

But Blake is still a young footballer, and he does possess the necessary attributes to succeed.

The potential 4-year ban for Michael Jennings remains the biggest question mark for the Eels moving forward; the signing of Tom Opacic was seen as a depth signing, and now the Eels face the unenviable task of replacing an in-form, veteran centre.

The addition of Bryce Cartwright adds an attacking spark that we have not seen in some time.

The Eels' starting forward pack was as good as any side's in 2020 - their weakness was their lack of punch coming off the bench, and whether this has been addressed remains to be seen.

A back-up hooker in Joey Lussick has been signed, to give Reed Mahoney a spell occasionally, and young Oregon Kaufusi should see more game time in 2021.

One of Parramatta's most puzzling issues is their lack of pure speed in the outside backs - Blake Ferguson has great top speed, but isn't lightning off the mark; Clint Gutherson works hard, but is hardly bottled lightning; Maika Sivo is raw, unadulterated power. The only player with genuine pace is Waqa Blake.

This reviewer believes that the Parramatta Eels will be a top 6 side in 2021, but depending on their recruitment to fill the noticeable holes in the squad, they may slide to the bottom half of the 8.

However, it would be a genuine surprise if this squad did not play Finals football in 2021. Here's how I think the 17 will look at its best: