It was a case of déjà vu all over again for the Rabbitohs. Yet again, South Sydney went within one game of the grand final, falling short at the final hurdle. The main difference this time around being that it was somewhat unexpected.

Sure, Parramatta were sliding in form and Souths were highly rated by most to reach week three of the finals. But consider the season-ending injury to Latrell Mitchell. It was supposed to be the crack the exposed the Rabbitohs.

Instead, they rallied together to soar into October as a genuine dark horse. A 60-8 thumping of the Roosters is as dominant as you can get. In the end, the Bunnies just lacked the energy to get over the top of Penrith.

The succession plan is nearly complete with Wayne Bennett set to finish in his head coaching role at the end of the year. Can he plot one final premiership push? After his recent Origin heroics you would be a fool to doubt the supercoach. 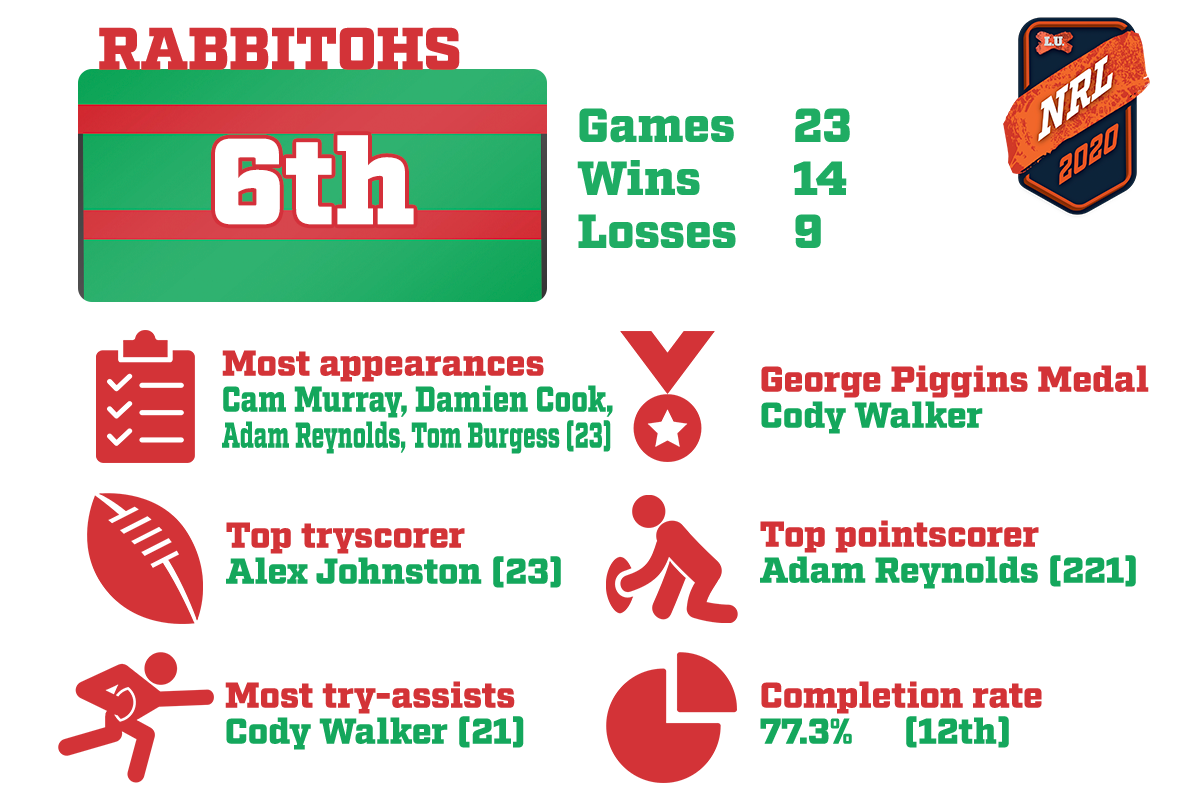 South Sydney's 56-16 statement victory over Manly was when the rest of the competition really started to take notice. It followed a last-gasp 31-30 win over North Queensland when it appeared that while the Rabbitohs would likely qualify for the top eight, they were anything but contenders. Instead, they were far too inconsistent and lacked the killer edge to compete with the top teams. The 40-point drubbing of Manly and subsequent 38-0 shutout win over Parramatta saw Souths announce themselves to the rest of the league and gave them the confidence to move past the injury to Mitchell.

There was plenty of talk surrounding a lack of depth and talent in South Sydney's forward pack but that was dispelled. Tom Burgess improved dramatically to increase his average run metres per game to 135 from 115 the year prior. He took on a leadership role and did well to set an example. His supporting cast was not too bad either. Tevita Tatola enjoyed a breakout season while Keaon Koloamatangi's 103 metres from 30-odd minutes off the bench in particular proved vital in keeping the momentum going. That in turned flowed onto a spine that, while not gelling immediately, started to really fire later in the season. What was particularly impressive about South Sydney's attack was how instinctive it was - and that is key given so much of it was built off the work of Damien Cook and Cody Walker.

Souths struggled early on in the season and it is no coincidence that it coincided with the decision to shift Cameron Murray to the edge. Murray was explosive in the middle of the park in 2019 and his quick play-the-balls proved crucial in giving Cook the space and time he needs to be at his best. Murray's impact was limited on the edge though, where he just did not get his hands on the ball enough. Sure enough, Cook failed to hit 100 running metres in the four games to open the season where Murray played on the edge. Once he moved back to lock, the nifty hooker hit the century 11 times from 19 matches.

Campbell Graham quickly surged into State of Origin reckoning in a clear indication of his rapid rise in 2020. His try-scoring form commanded attention late in the season and was not just the product of playing in a scintillating attacking side. Rather, he had a habit for using his strength and determination to bust tackles close to the line - his try against Parramatta with four defenders around him being a perfect example. Corey Allan is also worth mentioning given how seamlessly he transitioned into the fullback role following an injury to Mitchell. His touches weren't as classy but his ball-playing skills improved constantly and he grew in confidence to prove an unsung hero of South Sydney's surge to the finals. Of course, you can't mention the Rabbitohs' rise without Walker. He's the kind of player you can study for hours and do plenty of video work on but still have little chance of defending on the field. Testament to that is the fact Walker finished tied alongside Nathan Cleary for the most try involvements all year.

Having been locked down until at least the end of the 2023 season, the Rabbitohs can look forward to more highlights from Koloamatangi. The departure of Bayley Sironen leaves a hole on the edge that the youngster is more than capable of filling. He can also take on a more dominant role up front if needed, meaning his versatility will prove invaluable moving forward. 102 running metres and 14 tackles from just 33 minutes on average off the bench is a fair effort in your rookie season.

With Mitchell fit and healthy, the only real issue will again be depth in the forwards following the losses of Ethan Lowe, Jack Johns and Sironen but the signings of Jai Arrow and Jacob Host address that problem. The emergence of rising forwards this season too will fill Souths fans with confidence. If they can keep their spine on the field, there is no reason the Rabbitohs can't go one step further in 2021 and send Bennett out with a premiership.