Sam Bourke takes apart Canberra's 2020 campaign as we near the end of our NRL season review series.

Canberra came into the season as one of the favourites for the premiership following their heartbreaking loss in the 2019 decider to the all-conquering Roosters. If there is anyone you want in charge of a team scorned it is the ultimate competitor in Raiders coach Ricky Stuart.

This was reflected from the commencement of the 2020 season, as the Raiders came out of the blocks well winning their first three games of the COVID impacted season. However the new rule changes along with the state forced regulations went against the side, as they were forced to relocate their home games from GIO Stadium to almost three hours up the Hume Highway to Campbelltown Sports Ground. These adjustments coincided with the Green Machine losing four of their next six games.

Canberra's poor form was further compounded when their season was then seemingly stopped it its tracks when they lost their skipper and conductor out of dummy half Josh Hodgson against Melbourne in Round 9. This saw most pundits immediately getting out the red pen to put an official line through 2019 Grand Finalists' season.

However the master of motivation Stuart used these unfortunate chain of events to his advantage, lifting the weight of expectation off his crest fallen side as they immediately beat the Roosters in Sydney, then Souths in Canberra to set off a mid-season revival. This saw the men from the nation's capital flash home with a wet sail winning nine out of their last eleven to just miss out on the Top 4 on for and against.

Finishing 5th they then beat a limping Sharks in their first elimination final and then finally got their ultimate revenge a few weeks earlier than expected, by knocking out the Roosters and in the process becoming the first Raiders side to defeat the Roosters twice in Sydney in a calendar year since 1990.

Heading into their preliminary final against Melbourne at Suncorp Stadium, the Green Army faithful began dreaming of back to back Grand Finals and another chance for their first taste of premiership glory since 1994. However Ricky Stuart's men where again cruelled by state based COVID restrictions, forced to travel to Brisbane on the day of the match. While this was not an excuse, the Minor Premiers Melbourne were simply sublime in the first half, blowing a tired Canberra side off the park, scoring 24 points in as many minutes. This time there was no revival and the season was over as the Raiders found finishing outside of the Top 4 just too difficult against a refreshed opponent.

Heading into 2021 they lose some key performers in John Bateman and Nick Cotric, however they have now build a forward pack with experience and one of the best halves combinations in the competition which again leaves the premiership window ajar for next season. 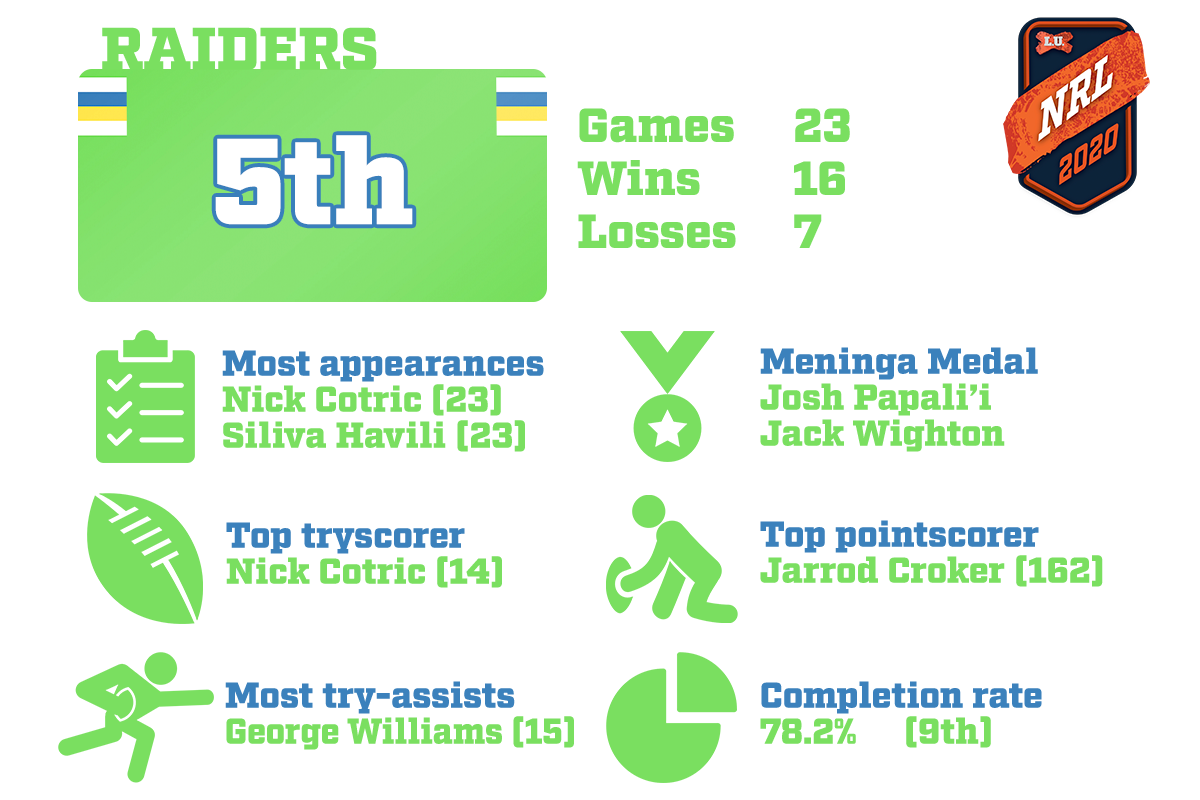 After losing Josh Hodgson in Round 9 they were written off, however rather than kick stones or make excuses the Raiders then stunned the defending premiers at SCG to run out convincing 24-10 winners after being down by six points at halftime to put the competition on notice. Josh Papalli again enhanced his reputation as the man for the big moments, when he scored the match winner with 15 minutes remaining. The win set the side up with belief that they were still contenders for the title despite losing one of their most dynamic attacking weapons in Hodgson, with Canberra going on to drop just two matches in the regular season.

The halves combination of George Williams and Jack Wighton was the big question mark heading into the season. Many critics questioned whether having a combination of two natural ball runners would suit the Raiders style of play. From Round 1 the combination clicked and throughout the season they managed to score 20 tries between them and also producing an impressive 23 try assists. Wighton in particular had a stellar season, winning the Dally M Medal to go with his Clive Churchill Medal from the 2019 Grand Final. These accolades achieved by Wighton is significant for the club moving forward, he is now the elite half and consistent match winner that the club has craved for a long time.

Losing the dynamite strike of centre Joey Leilua to the Tigers looked to be something that Canberra could cover with their depth at the club and particularly with the recruitment of former Storm centre Curtis Scott. Scott was involved in an off-field incident which hampered his pre-season and the highly rated youngster failed to deliver in his first year with the club. This also coincided with a dip in form from club legend Jarrod Croker who also failed to reach the heights of previous years in both attack and defence. The centre position proved a difficult position to secure throughout the season, with several players such as Michael Oldfield and Jordan Rapana rotating in and out of the position. Coming into 2021 there is no doubt that Scott and Croker are proven in their position and getting both centres fit and firing by Round 1 will be a priority in the off-season.

Jack Wighton and Josh Papalii are now arguably the best players in their position in the NRL. The Dally M Medal awarded to Wighton shows how consistent he has become for the Raiders and on several occasions in 2020, he took it upon himself to take the game away from the opposition. The same applies to Papalii who for two seasons in a row has been one of, if not the best forward in the competition. While the Raiders have both these players in form, they can beat anybody with strike power these two stars possess.

Semi Valemei was the Raiders best rookie, making a daunting debut off the bench against the Roosters in Round 10. The Fijian winger went on to play ten games and scoring 4 tries. Ricky Stuart went on to blood several debutants throughout the year including Harley Smith-Shields, Adam Cook and Matt Timoko who all made their NRL debuts.

The Raiders lose two of their most consistent and dynamic players in John Bateman and Nick Cotric (Top Tryscorer - 14 tries) heading into 2021 but importantly gain a fit again Josh Hodgson. The big tick for the Raiders though is the dramatic improvement from the likes of Joseph Tapine, Hudson Young, and QLD Origin prop Dunamis Lui. The mid-season purchase of Corey Harawira-Naera from the Bulldogs and the very shrewd signing of former Titan Ryan James should see the Raiders again push for the finals for a third straight season in 2021.

Based on current signings, this is what I think their best 17 looks like next season: