One referee, faster rucks, less wrestle and less structure - surely this spells the end of the purple haze that has seen the Melbourne Storm make at least the third week of the finals every year since 2015?

Post the COVID-pause, many pundits were writing the Storm's chances off due to the significant shift in the way the game was to be played - and after first up a disappointing loss to Canberra in Round 3, one could've been forgiven for buying into such predictions. By the middle of June, the Storm had gone 2-2 since the resumption with a rare loss to Penrith coming after a couple of less-than-convincing wins.

From that point howevrer, the Storm would win eight in a row - including a contender for game of the year against the Roosters which went to golden point. It was around this time that the entire club was forced to leave Melbourne due to a significant COVID outbreak, with the Sunshine Coast eventually becoming home for the rest of the season after initial stops in Albury (to train) and then matches in Kogarah and Brisbane. To wrap up the season the Storm lost just two of the last six games, but both times were missing significant numbers of regular first graders. As the finals loomed what was clear though, was the Storm had a devastating attack but question marks remained over their defence.

Week 1 of the finals saw Melbourne trail early against Parramatta before ultimately blowing them out 36-24, and earning a week off and a "home" preliminary final (at Suncorp) against either their 2018 nemesis the Roosters, or the new bogey side Canberra. Ultimately the Raiders progressed to face the Stormin the prelim, where a ticketing mishap at the gates saw thousands of fans stranded outside the venue whilst inside the Storm picked the Raiders apart in the opening 15 minutes - racing out to an 18-0 lead. By the 22nd minute it was 24-0 a lead which was never in danger of being run down.

Once again this meant the Melbourne Storm would be playing on the final weekend of the season - their fourth grand final in five years but with only one win from the three leading up to this year. In a very fitting end to sometimes chaotic COVID-affected 2020, the Storm raced to a 26-0 lead against minor premiers Penrith, but clung on to win 26-20 and finished the match with two players in the sin bin. 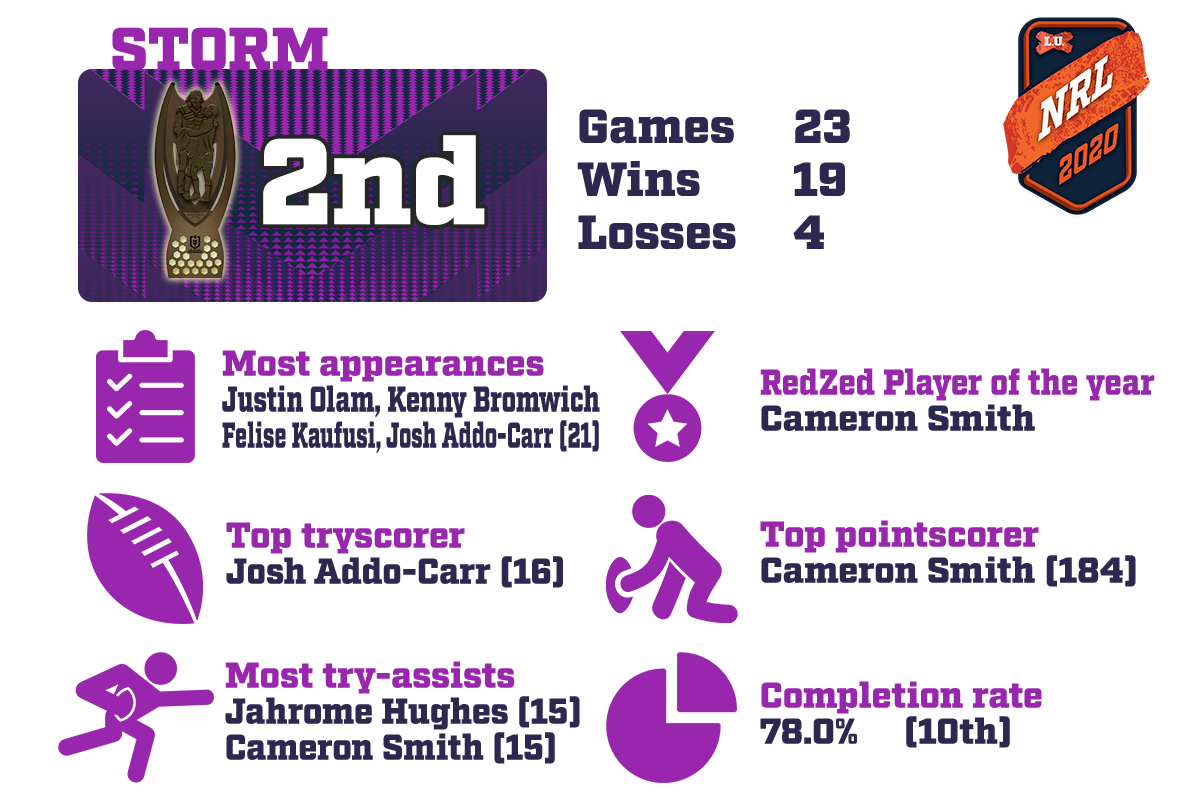 If there was a turning point in the Melbourne season, it was the second clash with the Roosters - while the score finished 24-6 it was evident that the 2020 version of the Victorian outfit were a cut above the dual-reigning premiers, from here the left side attack of the Storm and the punch from the bench featuring Nelson Asofa-Solomona, Tino Fa'asuamaleaui and Brandon Smith became the standout factors for a side that would eventually lift the premiership trophy. A secondary turning point which proved to be a blessing were injuries to key players throughout the year, this coupled with no mid-year State of Origin meant that the Storm would head into the final series fresh for a tilt at the premiership.

With revised rules changing the policing of the ruck, 2020 was meant to be the beginning of the end of Cameron Smith as a dominant force in Rugby League - but he once again proved why he is in the conversation of the greatest to ever lace a boot. Despite missing several games through the middle of the year he finished fourth

in Dally M voting and had his hands all over the direct and punchy attack through the middle which set up the other key piece of what worked in 2020 for the Storm. The left side attack with the blistering pace of Papenhuyzen and Addo-Carr coupled with the guile of Munster and Bromwich and the sheer physical force that is Justin Olam. Melbourne tore teams to shreds on this side of the field and scored a competition leading amount of tries from their own half, largely down this side of the field. The development of key players in the spine was also a huge part of what saw the side excel in 2020, and only in their fans' wildest dreams would they have had another fullback with the game breaking ability that Ryan Papenhuyzen possesses, and so soon after Billy Slater retires.

There wasn't a lot that went wrong for the Storm or that didn't work, and while injuries to key players stifled momentum, it never stopped the Storm from picking up wins. At times it looked like their edge defence may let them down in the big games at the end of the season, but this was a year where everything came together perfectly.

If 2019 was the breakout year for Ryan Papenhuyzen then 2020 was the year he cemented himself as an absolute star of the game. Fittingly, he capped the year by being awarded the Clive Churchill Medal for a brilliant performance in the Grand Final.

As Melbourne clicked into gear it was the linkup play down the left featuring Papenhuyzen that was a real highlight - throw in a couple of game breaking length of the field tries and it was a pretty stellar year for the young fullback. Up front there were a number of strong performers in patches through the season, but Christian Welch went to another level as the year wore on. In a testament to his importance in big games, Queensland won both Origin contests in which he featured at the end of the year.

There were a number of players to make their debut for the Storm this year but there are two standout names that come to mind when we talk rookies. Both made their debut for Queensland however - only one played for the men in purple through the year. As we look forward to 2021, Harry Grant will return to the Storm after a loan spell at the Tigers, but it will spell the end of Tino Fa'asuamaleaui's time in Melbourne as he heads for the beaches of the Gold Coast.

This time last year the major question hovering over the Melbourne Storm was the owner of the number 7 jersey, it is safe to say that this has been put to bed with Jahrome Hughes becoming a key cog in both attack and defence.

As we look forward to 2021 there are a couple of questions hovering over the Storm - obviously there is the elephant (or GOAT) in the room, being Cameron Smith's future and who takes the number 9 jersey should he in fact retire or move on? Beyond this how will Melbourne replace the impact of Tino Fa'asuamaleaui from the bench, not to mention the 86 tries that Suliasi Vunivalu scored in just 111 games!

Based on current signings, here's how I see Melbourne lining up next in 2021: