After a slow start under debut Coach Justin Holbrook in which they managed just four wins in the opening 15 weeks of the competition, the Titans finished season 2020 as one of the hottest teams in the league winning their final five games to finish in ninth position and just one win away from the eighth placed Sharks.

It is worth noting that only one of them wins came against top 8 opposition and it's always easier to get on a late season roll when the pressure of qualifying for the finals has passed, but it was impressive all the same - mainly due to the attacking and expansive brand of footy they were producing in claiming them victories.

Coach Holbrook has seemingly wasted little time in re-shaping his roster since arriving at the club.

In the Gold Coast departure lounge at the end of last year - Jai Arrow, Shannon Boyd, Ryan James, Young Tonumaipea, Keagan Hipgrave, Dale Copley, Nathan Peats and Tyrone Roberts have all moved on with Arrow the only regular contributor out of that group last season.

He was essentially replaced early last year with the signing of Tino Fa'asuamaleaui in what has turned out to be a shrewd investment given his breakout season in 2020 in which he played a key role in Melbourne lifting the trophy before making his Origin debut and helping the Maroons to an unlikely series win.

Whilst also gaining some handy pickups in Herman Ese'ese, Sam McIntyre and Patrick Herbert - the prize signing is of course that of former Bronco and Maroons representative David Fifita who gives the club the sort of star power lacking since their inaugural years when the likes of Preston Campbell and Scott Prince were lighting up the glitter strip.

With key signings Fa'asuamaleaui and Fifita joining the likes of Moeaki Fotuaika and Kevin Proctor in the Titans pack, they should have no problem laying a solid platform to showcase their exciting brand of rugby league.

Jamal Fogarty on the back of a strong breakout season should be better again this season as he continues to steer the ship, allowing Ash Taylor and AJ Brimson the freedom to showcase their attacking wares. Throw in the craft and experience of Mitch Rein out of dummy half and they look to have a well-balanced squad capable of making a deep run.

They also look to have good depth with the likes of Corey Thompson, Sam Lisone, Tanah Boyd, Erin Clark, Beau Fermor and Jai Whitbread all a chance of missing out on their best 17.

With an air of anticipation around that they will break a five year finals drought comes a level of pressure that this squad is yet to face. How they perform under that pressure when the whips are cracking will no doubt play a key role to how deep they go. They are also probably an out and out superstar short in one of the key spine positions but who knows, that signing might yet come...

With their opening three games coming against the Warriors and fellow Queensland teams Brisbane and North Queensland, the Titans will be looking for a fast start to pick straight up where they left off last season.

Potentially facing a testing Origin period this time round with more players in line for selection and games against the Storm and Roosters either side of Origin one and a clash with the Eels two days after the series wraps up.

If they are to qualify for the eight this year they will have faced a competitive month leading in with games against the Storm, Rabbitohs, Knights and Warriors to round out their regular season campaign. 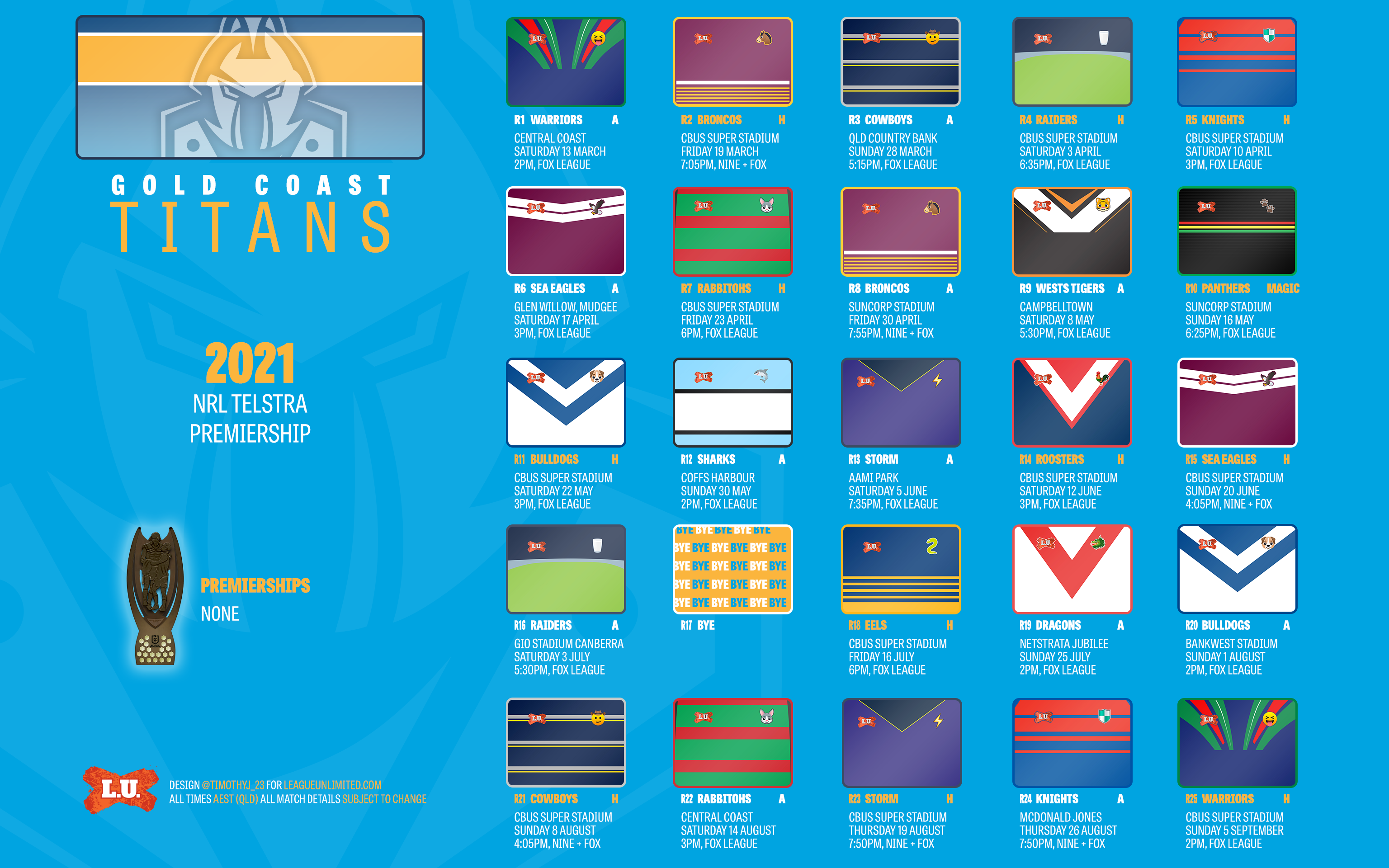 Marquee signing David Fifita travels down the M1 with big expectations after signing a lucrative deal that will see the 20 year old become one of the biggest money earners in the game. Whilst some often struggle to live up to their lofty pay packets, you get the sense it won't phase the young wrecking ball with his on-field role changing little. Blessed with super-human strength that sees him busting tackles with ease, Fifita also has the ability to step off both feet and is amongst the quicker forwards getting around when in the clear. Brings with him the kind of X-factor the Titans have long been lacking, the Maroons rep is capable of winning games off his own back.

Whilst charging home to win their last five games, the real turnaround in the Titans fortunes last year came a few weeks prior when AJ Brimson returned from a long term back injury to ignite their attack. The blistering pace of the livewire fullback saw him cross for seven tries in nine games at the back end of the year to earn him an Origin debut. Unfortunately, Brimson suffered another blow in his rep debut injuring the Lisfranc ligament in his foot. The good news is he's reportedly on track to line up in round one and has looked very sharp buzzing around the training paddock. The diminutive number one is the spark plug to the Titans attack and he'll need to stay relatively injury free for them to make the 8.

Since making the Holden Cup team of the year at the Eels in 2017 the tackle busting winger has been touted as a future star but has been unable to break into a starting NRL side at either the Eels or Titans. In 2019 plying his trade for Parramatta feeder club Wentworthville, Marzhew averaged 173 metres and 7 tackle busts per game to lead the league in both categories. Securing a train and trial deal with the Titans last off season he forced his way into the top 30 but was unable to showcase his skills with the second tier leagues not returning in line with the NRL.

Known predominantly as a winger, Marzhew has been given an opportunity to shift one in and test his wares at centre during pre-season and scored a hat-trick playing there in the recent trial against the Burleigh Bears. Looks to have all the ability in the world will add even more strike to the Titans backline when he does crack the top grade.