Few teams disappointed quite like the Manly Sea Eagles in 2020.

An unfortunate run with injury compounded with the challenges of COVID-19 contributed to the side's lacklustre 13th placed finish; but after showing tremendous resilience to reach the semi finals the previous year, the shortcomings of 2020 were all the more apparent.

Finishing the year with a single win from their final nine matches, coach Des Hasler will be determined to stiffen his side's defence after conceding 25 points on average; ranking ahead of only North Queensland and Brisbane. The side also endured a shocking record at home managing a single win at Lottoland from seven appearances.

Recruiting Samoan representative Josh Aloiai to replace Tongan enforcer Addin Fonua-Blake up front, premiership-winning playmaker Kieran Foran returns following an underwhelming five-year stint away from the northern beaches. Emerging speedsters Jason Saab and Christian Tuipulotu are set to add depth in the backline, while late bloomer Andrew Davey will be determined to fill the void left by Joel Thompson in the backrow.

Beginning the year with an away clash against the Roosters, a mostly favourable draw will see the side face six of the seven teams that missed out on finals football twice. Set to play on ANZAC Day for the first time since 2016, the side will be aiming to recapture the aura of ‘Fortress Brookvale' with six of their final nine matches to be played at home.

Whenever a team pins their premiership hopes on a single player it is often fraught with danger. Tom Trbojevic may not be in the same league as Andrew Johns or Johnathan Thurston, yet his influence on the Sea Eagles gives such comparisons an air of legitimacy. Managing just 19 out of a possible 46 matches over the past two seasons, the 24-year-old local product holds a 73 per cent success rate in that time, while earning rave reviews on the representative stage to boot. Set to bring up a century of appearances for Manly early in the year, the superstar fullback possesses remarkable natural ability as one of the few players in the league capable of single-handedly changing the course of a match.

In one of the most baffling recruitment decisions in recent memory, the Sea Eagles will head into the new campaign without a recognised number nine. Opting against re-signing Danny Levi and set to be without rising star Manase Fainu until the verdict of his trial in July at the earliest, the club renown for the likes of Max Krilich and Matt Ballin looks set to manufacture utility Lachlan Croker and half Cade Cust into an unconventional dummy half tag team. In a competition where the reigning premiers boast multiple hookers with representative experience, it's hard to see the Sea Eagles making a serious play for the eight without a nine.

A tricky start for the struggling Manly outfit and it's made no easier with the loss of Tom Trbojevic to injury over the opening weeks. They're away to '18-'19 premiers the Roosters first up before hosting Souths. Grand Finalists Penrith are early combatants as well - twice in the first eight rounds.

Manly have the bye before Origin 1 in June, and host Canberra prior to Game 3 - but have a generally soft draw over that Origin period otherwise, facing clubs from the bottom half of the 2020 ladder like the Cowboys, Titans, Bulldogs and Dragons through that time.

The run home see them host fierce rivals and reigning premiers Melbourne at the start of August, the Rabbitohs a week later, then away trips to Canberra and Townsville bookending a home game against Canterbury. 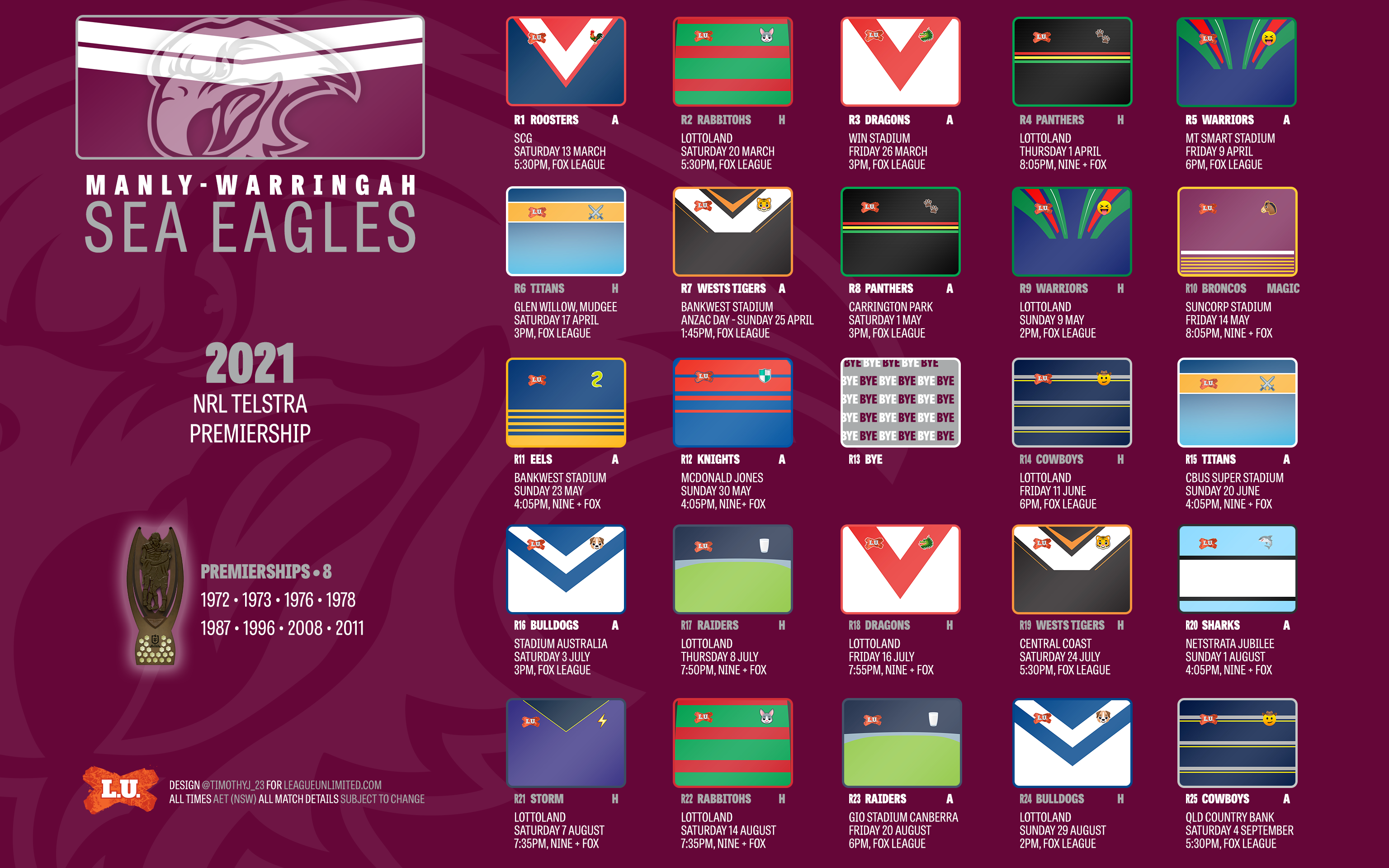 When Kieran Foran first partnered with Daly Cherry-Evans under the watch of Des Hasler a decade ago, the result was a grand final victory few envisioned. Enduring a difficult run with injuries over the past five seasons across stints with Parramatta, New Zealand and Canterbury, the 30-year-old Kiwi international has continued to be an influential playmaker when fully fit. Touted as a possible answer to the side's unknown number nine jersey, Foran looms as a certified winner capable of instilling much-needed mental toughness to a squad that struggled in the face of adversity last season.

Regarded as a star of the future after an eye-catching debut late in 2020, Josh Schuster will have his sights set on making the five-eighth role his own. Contracted to the club until the end of next season, a strong pre-season and trial form could see the 19-year-old nephew of former Newcastle outside back, John, start the season ahead of established stars Dylan Walker and Kieran Foran.