And then there were none….

Players don't always get the fairytale farewell that fans think they might deserve. The heart break of losing a grand final, compounded by knowing it's your last game must be an unimaginably hollow feeling & one that a Melbourne - nay - rugby league great had to endure in 2018. Flash forward two years and whilst there has been no confirmation of his next move, many expected the 2020 Grand Final would be Cameron Smith's swansong, could one of - if not the - greatest player of all time deliver one last time for the club he has represented since 2002? It may have gotten a little hairy at the end, but a calm and composed Smith steered the Storm to an unassailable lead early in the second half and as they say the rest is history.

New rules after two rounds, a home away from the home away from home - there were many challenges that the Storm faced in 2020, yet every time the whips were cracking, Craig Bellamy's men had the answer. And unlike 2018 and 2019, they had another gear that for the most part the rest of the competition couldn't go with.

As I look back at my season preview last year, the two biggest questions I had were the centres and the halfback. Twelve months later, Justin Olam is a genuine star on possibly the most potent left edge in the game, Brenko Lee is an Origin-series-winning centre and Jahrome Hughes is a proven match-winner capable of taking games by the scruff of the neck through his accurate kicking game and astute run choices.

As we look at 2021, there is one obvious question. How do you replace the captain, goal kicker, on field general a̶n̶d̶ ̶r̶e̶f̶e̶r̶e̶e̶? Whilst there are two extremely capable number 9's waiting to take over from Smith, it's the intangibles that he brought to the team which will be the hardest to replace. You can replace his tackles and his passes but how do you replace his ability to make correct decision after correct decision when the heat is on?

The other big question - can Reimis Smith or George Jennings replace a strike rate of almost eight tries in every 10 games on the right wing? For all his idiosyncrasies, Suliasi Vunivalu was one of the great try scorers in the last five years - see his effort against Canberra in the preliminary final from last year or his instinctive intercept and length of the field run the following week on the biggest stage.

It is however not all doom and gloom. The Storm will welcome back into the fold Harry Grant, a man many expect to be the Queensland hooker for the next 10 years (kind of fitting really, isn't it?). Harry is the reigning Dally M rookie of the year after lighting up the NRL for the Wests Tigers and making a stunning debut for Queensland off the bench in Game 3 of the 2020 State of Origin.

The development of backline players Olam, Ryan Papenhuyzen and Lee mean that despite losing a key contributor the Storm backline the rest of the backs are settled and should start 2021 full of confidence. In particular 'Paps' will have a point to prove after earning selection in the NSW Blues squad, but ultimately being unable to force himself into the team in Game 3, if he starts 2021 how he finished 2020 then the Storm won't miss a beat in attack.

Big game experience wins big games and the Storm are flush with this experience. From the master himself Craig Bellamy and throughout the majority of the squad there are representative players with experience across multiple finals and grand finals. Added motivation may exist for the super coach himself, his legacy will be a lasting one in the NRL however if we were to win a grand final without any of the big four (Smith, Billy Slater, Cooper Cronk and Greg Inglis), he will finish up as possibly the greatest coach the game has seen.

The other man with the added motivation is Cameron Munster, after winning the origin series he remarked in a post-game interview that it was good to win a series for Queensland without any of the ‘big guys' playing, with this mentality I expect to see a very different Munster in 2021.

No Smith. Over 430 games of experience, over 2800 points and countless tackles. Simply put the impact Cameron Smith had on not only the tempo of the game but also the way he lifted players around him is almost impossible to replace. Smith aside the losses of Vunivalu and Big Tino Fa'asuamaleaui, who at times were spectacular for the Storm in 2020 will also hurt.

Given the way the draw played out in 2020, analysing this draw feels like an odd activity. The Storm open the season against the Rabbitohs on a Thursday night where Craig Bellamy will be looking for his 19th consecutive win in Round 1, having lost zero times in the first game of the season.

Other key match ups are the round 3 Grand Final rematch, the Roosters in round 6 and the Raiders in round 11, all three of these teams will be hurting after losses last year (some in more important games than others). If Smith were to sign for the Titans or Brisbane then these immediately become huge games on the calendar in 2021.

Melbourne's run home includes a clash with rivals Manly, a home game against preliminary final opponents Canberra, and ultimately ends at Kogarah where the Sharks will host them. 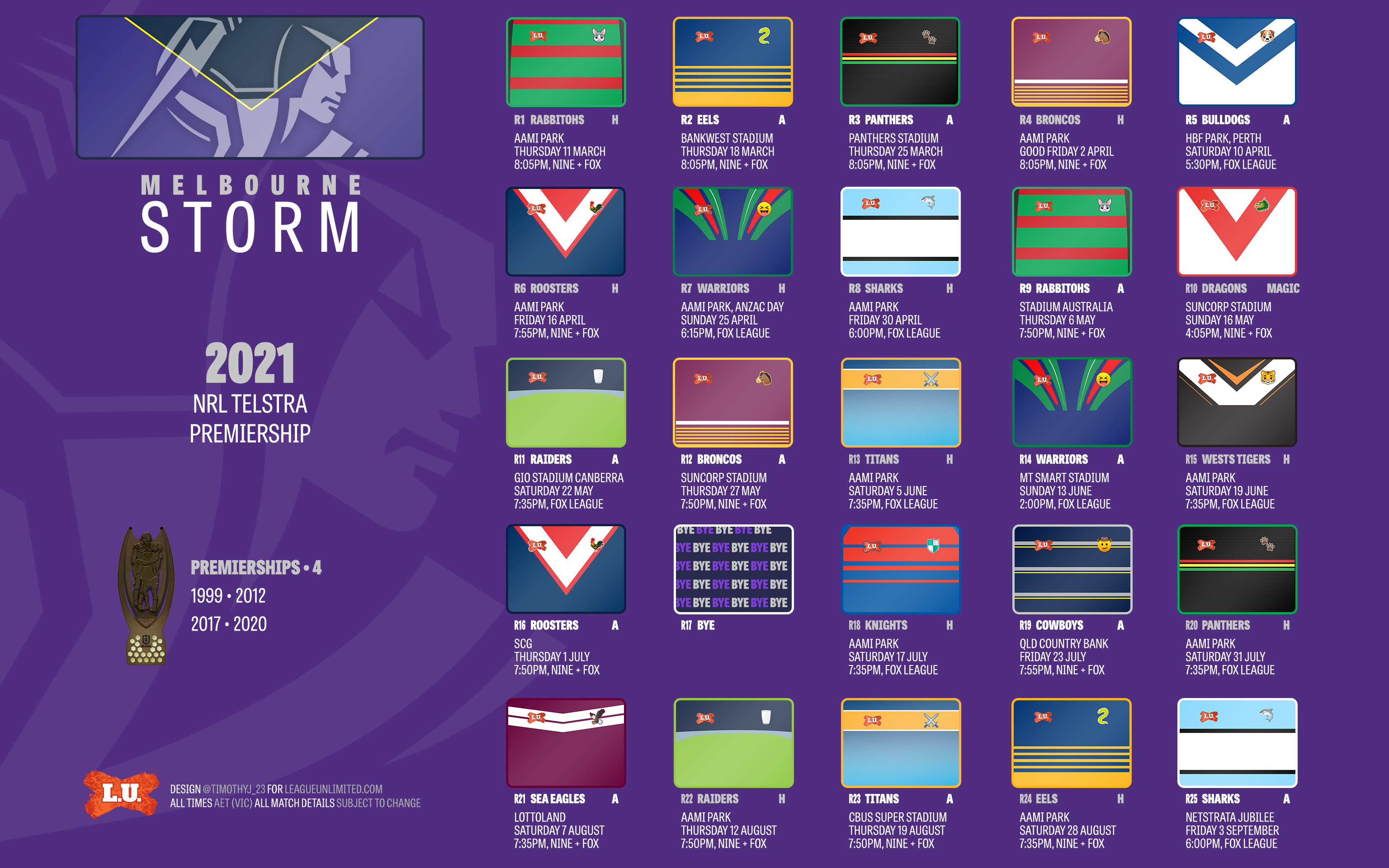 Harry Grant and Brandon Smith, two players who are set to step into the biggest shoes in rugby league. Should one or both of these players fail to deliver then the Storm campaign is likely to be doomed. However if both players can fire then the Storm potentially pose a greater attacking threat than in 2020 with a dynamic dummy half running game to go with the slick backline movements.

With no pre-season games to base this on it's a tough call. Harry Grant is technically a Storm rookie but not a genuine rugby league rookie. At 190cm tall and weighing 107kg Aaron Pene who has played just 1 game of first grade is physically equipped to have a strong 2021 season, his biggest challenge will be breaking into the first grade side with some more seasoned campaigners in front of him in the pecking order.