Todd Payten is promising a complete overhaul at the North Queensland Cowboys.

But don't mistake it for a rebuild - this is still a team capable of making the finals and going deep into September if they have the right processes and systems in place.

That is where Payten comes in.

He is saying all the right things - there is going to be a focus on doing everything with speed - be it coming out of the line in defence or moving the ball in attack.

The once stale, uninspiring Cowboys side of the past are expected to be transformed under Payten.

Given the way he brought together the Warriors and inspired the unlikeliest of finals runs last season, there are high expectations that he too can deliver similar results at North Queensland.

Remember, this was a team tipped to challenge the stranglehold the Roosters and Storm have so long held over the competition but within a few years it became clear former coach Paul Green was too reluctant to make the changes needed to spark new life into the team.

Payten has shown no such reluctance, confidently coming in with fresh ideas and a bold vision to transform North Queensland back into top-eight contenders.

If Payten can get the most out of an underachieving roster, there is enough talent on paper to take the Cowboys far.

Starting with the spine - which admittedly is not locked in - the contenders promise plenty.

Reece Robson has the pace out of dummy-half to fit into Payten's faster approach while Valentine Holmes, Scott Drinkwater and Hamiso Tabuai-Fidow are all dynamic options at fullback.

Then there is Jake Clifford, who may be on the way to Newcastle but has grown in confidence and developed his kicking game since making his debut for the club.

The most important name on that list is Michael Morgan, who has in many ways individually come to represent North Queensland's struggles since the 2017 decider.

Morgan himself was in career-best form at the time but has failed to fire since, with injuries playing their role.

He has the potential to rediscover the spark but has too often looked unsure of his responsibility in the team, expected to organise and lead the side around when he is more naturally suited as a running five-eighth.

Payten though understands the need to play to Morgan's strengths and it is a similar case for hulking forward Jason Taumalolo, who is set to suit up for fewer minutes.

It is quality over quantity for Payten, who is not afraid to make big calls that he believes will bring the best out of his marquee men.

He was able to motivate the Warriors to turn their fortunes around in the most trying of circumstances last season so you would have to be confident he can do similar at North Queensland.

Edge defence was a serious concern for the Cowboys last year.

The constant chopping and changing in the backline did not help but a serious lack of communication also contributed.

But often poor defence can be a sign of a team in need of a serious attitude adjustment and that will be a real test of Payten's coaching credentials.

Obviously, the attack is also another issue.

North Queensland are still far too reliant on block plays and the problem is that without Thurston pulling the strings, it is all too predictable.

Runners are not engaging the line enough before passing, allowing the defence to slide and handle it easily.

By using Taumalolo more as a decoy or having runners at angles charging at the line with intent, it should open up more space and create indecision.

After a daunting opening round trip to the 2020 runners-up in Penrith, the Cowboys' have a relatively easy autumn. Before their Round 13 bye (ahead of Origin 1), they only come up against Penrith, the Raiders and Roosters from last season's top eight. Manly are their post-Origin 1 opponents, while they are away to the Rabbitohs in Sydney prior to Game 3 and then come home to host the Roosters after it. Another tough contest looms a week later against the Storm.

The run home features one likely challenger in Parramatta, with the Titans, Tigers, Dragons and Manly the other clubs on the menu as their season winds down. 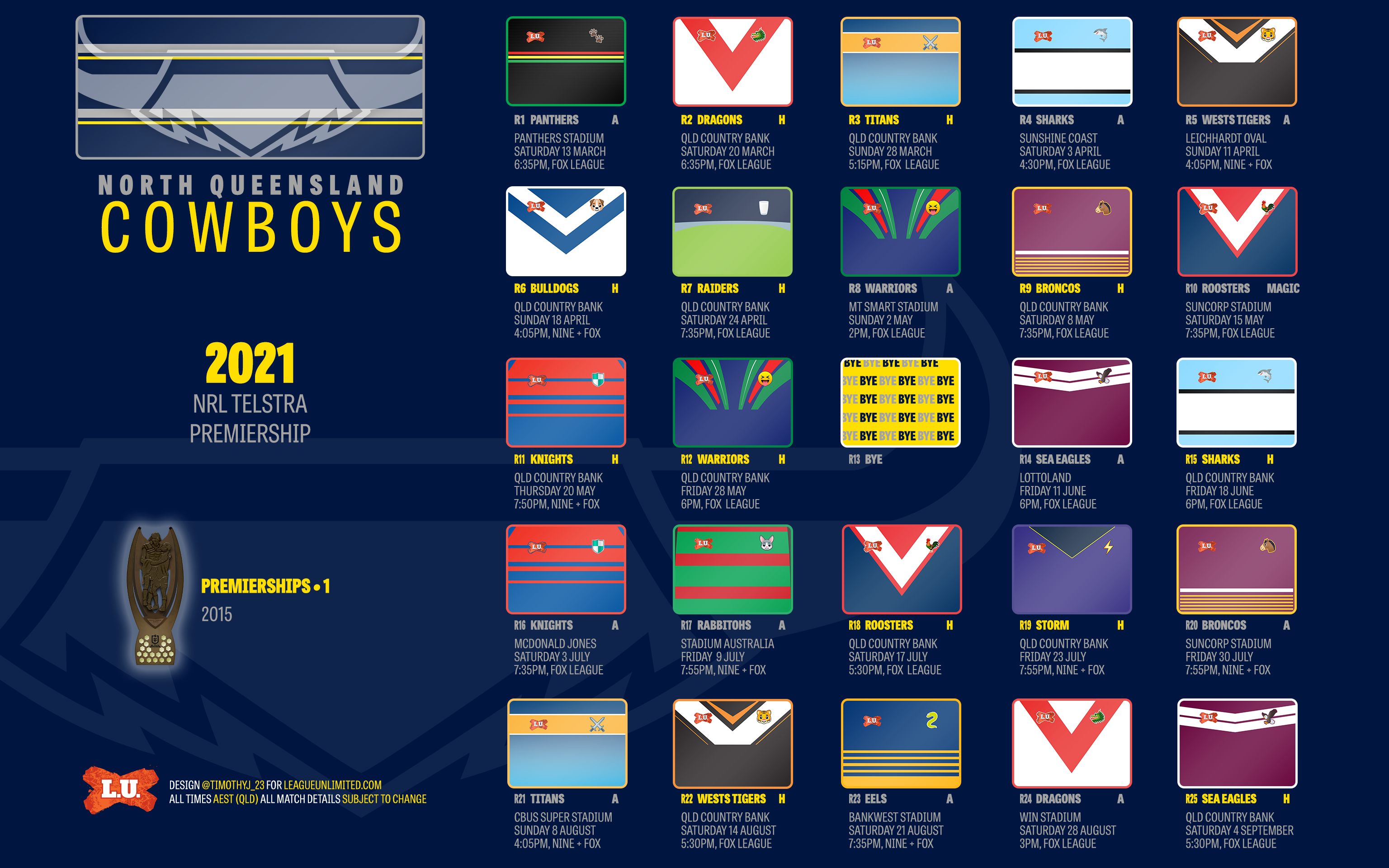 The Cowboys used to have a lethal combination between Thurston and his edge backrowers - more often than not Gavin Cooper.

However, that play seems to have lost its impact but could still have an important role in shaping North Queensland's attack if Coen Hess improves his dwindling form.

Hess' average running metres and tackle busts have both been on the decline since 2017, although part of that may also be connected to the increased defensive workload he has taken on.

Crucially though, Payten has previously coached Hess at the junior level and shapes as the perfect mentor to get the most out of him.

"What he does do well is run hard at smaller halfbacks, and if he can do that consistently he's going to be a handful," Payten told the Courier Mail.

"He understands that he wasn't playing well, he's had a good four or five weeks - particularly the last couple.

"I've coached Coen at an under-20s level, I understand him pretty well - he needs to keep things simple.

"I've got full faith in him, he's a tremendous young kid and I think he can play first-grade for a long time. I'd like to get him back in that Origin team."

Kane Bradley has the size and versatility to put himself in the frame for NRL selection.

He initially progressed through the grades in the second row before moving to the wing and at 196 centimetres tall and over 100 kilograms, he is a big body that would be hard to handle on the flank.

He is also a noted try scorer having crossed the line nine times in 17 games for the Tigers in the 2019.

The issue for Bradley though is that the Cowboys have lots of depth in the outside backs and are actually missing strike in the backrow, so it will be interesting to see if he is more likely to snag an opportunity there instead.