The Parramatta Eels - to paraphrase Winston Churchill, the Eels are "a riddle, wrapped in a mystery, inside an enigma."

But as Churchill went on to say, "Perhaps there is a key."

The Eels' 2020 campaign was inconsistent, but they did manage to show grit, determination, and some semblance of defensive integrity throughout the year - despite seeing their attacking prowess flounder for the majority of their campaign.

Season 2021 brings the young core of key players at the Eels another year's worth of experience, and some astute signings splatter an already talented team with some extra punch; thus, 2021 should be another step in the right direction for the long-suffering Blue and Gold Army.

The Parramatta Eels boast a very well-balanced squad on paper - they have two young, and talented (if erratic) halves; a forward pack that is big, fast, mobile, and skilful; a fullback who played Origin for the first time in 2020, and was almost a Dally M medallist; and big, powerful backs.

Dylan Brown, the Eels' 5/8, is still only 20 years old, and has shown composure, and defensive attitude, well beyond his tender years.

While he has a lot of improvement left in him, his statistics in 2020 paint the picture of a man with a very bright future head of him: 11 forced drop-outs, 109.9 metres average kicked per match, 5 try assists, 3 linebreak assists, 7 offloads, and 116 metres average ran per match. And all this with only 874 receipts of the ball (as opposed to his more fancied halves partner, Mitchell Moses, who demanded 983 receipts of the ball, and produced 8 try assists, 5 linebreak assists, 20 forced drop outs, 446 average kicking metres per match).

Dylan Brown is the key to Parramatta's attack, and he will benefit enormously from a pretty impressive 2020 season, as well as having a solid 2021 pre-season under his belt.

The Eels' forward pack is big, agile, strong, and skilful - the mixture of body shapes, and playing styles, makes containing the Eels' powerful pack a handful.

Junior Paulo, and Reagan Campbell-Gillard, established themselves in 2020 as two of the best tight forwards in the NRL; Shaun Lane, and Ryan Matterson provide height, skill, and speed out wide; Nathan Brown provides energy, and some strong offloading; and Reed Mahoney showed in the back end of 2020 that, if the coaching staff allow Mahoney to play his natural game, he is an attacking threat, just as much as a rock in defence.

Lack of big match experience has counted against the Eels for many years; Brad Arthur made it his mission over the years to inject some experience into the squad, and he has been able to do so.

However, this Eels unit as it stands, has still only won one Finals game from their last four campaigns.

It is not unreasonable to assume that further experience in important matches will help, but the Eels simply trail the standard bearers (the Storm, and the Roosters) by considerable margins.

Parramatta's backs are big, powerful, and skilful - but they lack genuine pace.

Blake Ferguson has good top end speed, but is slow to get his hulking frame moving; Maika Sivo has explosive power, but has average speed, and acceleration; Clint Gutherson is a tireless worker, but also has average speed.

Waqa Blake possesses raw speed, but he is a major contributor to another concern in this Parramatta team - namely, their edge defence.

Michael Jennings - despite his age - was able to shore up one edge, and communicate with Sivo, and as a unit they conceded only 3 tries after the first 10 rounds; Blake, and Ferguson, had conceded 14 tries after 10 rounds.

A mixed bag to start the season for the blue-and-golds. Melbourne are the key fixture at home in Round 2, but other contests look a bit easier with Brisbane and the Dragons among their opponents.

Newcastle and the Tigers are the Eels' opponents either side of Origin 1, while the pre-Origin bye before Game III is followed by a clash with the Gold Coast.

Parramatta's run home is probably the trickiest part of the season - preliminary finalists Souths, as well as Grand Final combatants Melbourne and Penrith among their last five. 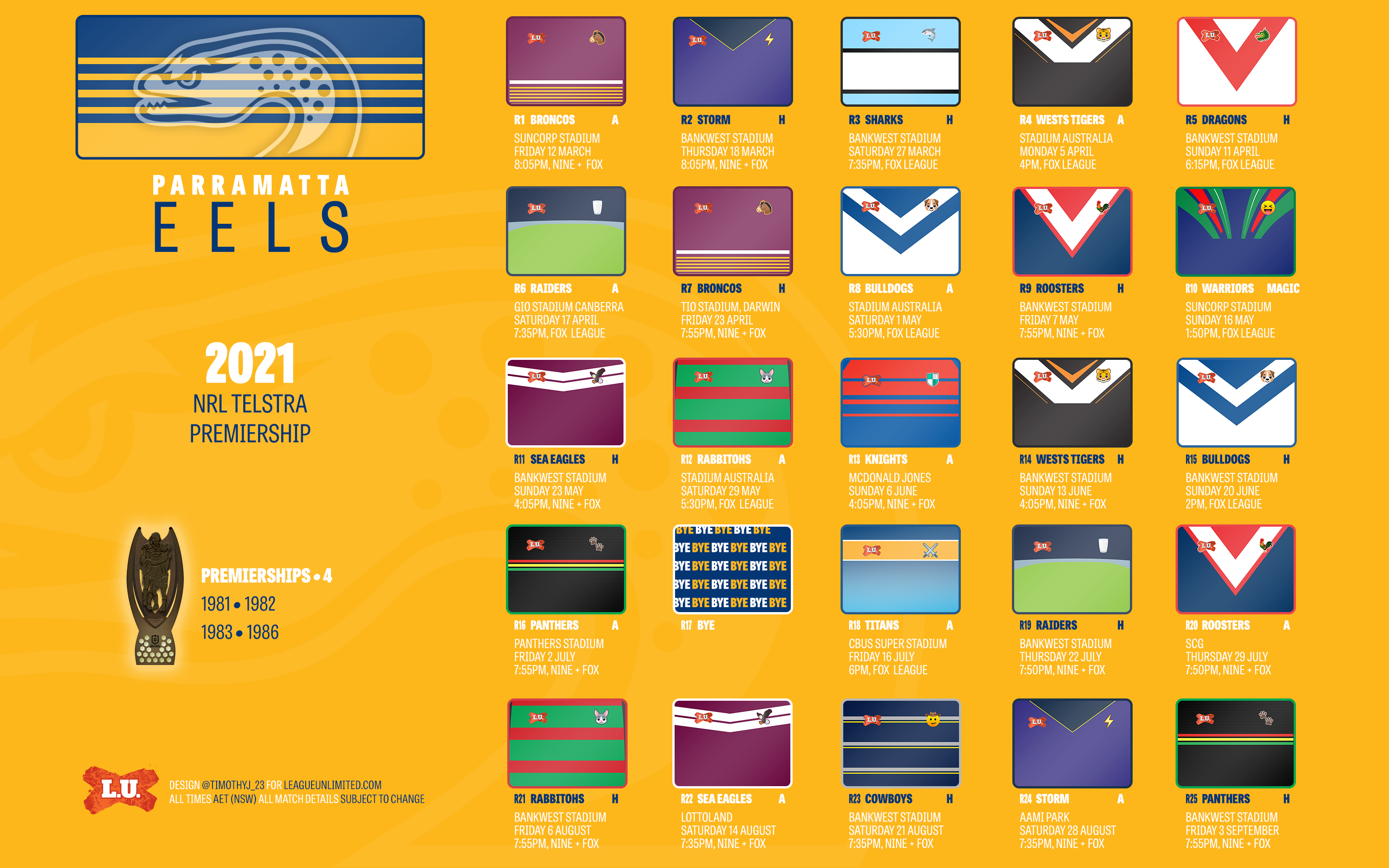 Clint Gutherson received the ball 881 times in 2020 - he obviously had more touches than Dylan Brown, to help ease Brown into First Grade, but Gutherson was able to muster up 17 try assists, 12 linebreaks, 10 tries, and 190 metres average ran per game.

Gutherson's tireless work ethic, and inspirational energy, will once again be key for the Eels.

Reed Mahoney was spoken about as a potential Queensland Origin hooker early in the year, before the spectacular rise of Harry Grant, and he showed plenty of promise - he made 968 tackles at 93.2% accuracy, received the ball 2,328 times, forced 5 drop outs, had 3 try assists, and 4 linebreak assists.

If Mahoney can get more opportunity to show his attacking skill, this Eels team will really benefit from it.

Haze Dunster made his NRL debut in last year's Finals campaign, and acquitted himself well; and due to Michael Jennings' career being in limbo, Dunster faces a unique opportunity to force himself into the squad.

Tall, rangy, and quick, Dunster is not afraid of the tough stuff, and will ruck the ball out all day.