Buckle up Rabbitohs fans. With Wayne Bennett's impending exit and a legitimate title shot, Souths are bound to become the season's headline act.

Largely written off prior to 2020 following the retirement of several club stalwarts, an irresistible mid-season groove saw Souths smoke opponents in some of the most breathtaking onslaughts of the NRL-era.

Despite defying the experts, a preliminary final exit was an all too familiar crash along another promising road.

Now less than a year later, they are poised to raise the bar once again. The additions of representative stars Jai Arrow and Josh Mansour complement established combinations, and even with limited time on the park, Benji Marshall may yet prove to be an astute signing.

Throw in the return of Latrell Mitchell, and if the No.1 stays healthy the Burrow's premiership dreams are well and truly on track.

Even in the absence of premiership legends Sam Burgess and John Sutton, the Rabbitohs' unheralded pack rarely skipped a beat last season.

With the likes of Tevita Tatola and Keaon Kolomatangi enhancing their reputations alongside the continued rise of Cameron Murray, the arrival of Maroons star Jai Arrow ensures Souths' middle ranks alongside the most formidable in the competition.

Mitchell's return gives Souths' an imposing presence, and in the company of the cunning trio of Cody Walker, Adam Reynolds and Damien Cook, even the most resolute of defense can be made to look second rate.

And in a year where once again little is expected to separate the top sides, don't discount the farewell factor in the Redfern boys' title prospects. Having already acknowledged South Sydney's enviable history, Bennett is sure to leave no stone unturned in a final attempt to etch his name alongside the club's greats.

Last season's preliminary final loss to Penrith was the third consecutive season Souths have stumbled one game shy of the grand final.

In a further twist, a sluggish Rabbitohs conceded starts in each of their 2020 finals games.

For all their power and finesse, it seems Souths' biggest battle in reaching the dizzy heights of 2014 lies more between the ears than anywhere else.

On the recruitment front, beyond the key signings, the loss of Corey Allan could come home to bite. The Origin back was Bennett's Mr Fix-It, the one who kept the likes of Alex Johnston and Dane Gagai in their favoured positions for the greater stability of the team.

South Sydney's season kicks off on the road against Melbourne before bitter rivals, the Roosters, round out a challenging first three weeks.

Rounds 4-7 make for easier reading, with each opponent having missed last year's finals. But a tough mid-season could shape their top-4 prospects with games scheduled against 2020 finalists from rounds 8 to 14.

A friendly draw during the Origin period means the Rabbitohs will only miss their stars for the round 17 clash against North Queensland. On the flip-side, Souths fans can consider their team unlucky to be drawn against each of last season's top-4 sides twice.

With a finish that includes away games to the Panthers and Roosters in the closing three weeks, Bennett's men should be match hardened for what is expected to be a fourth consecutive finals campaign.

And even with home games against Penrith and the Warriors relocated to Dubbo and the Sunshine Coast, Sydney based fans haven't been sold short with 17 matches slated for the Greater Sydney area. 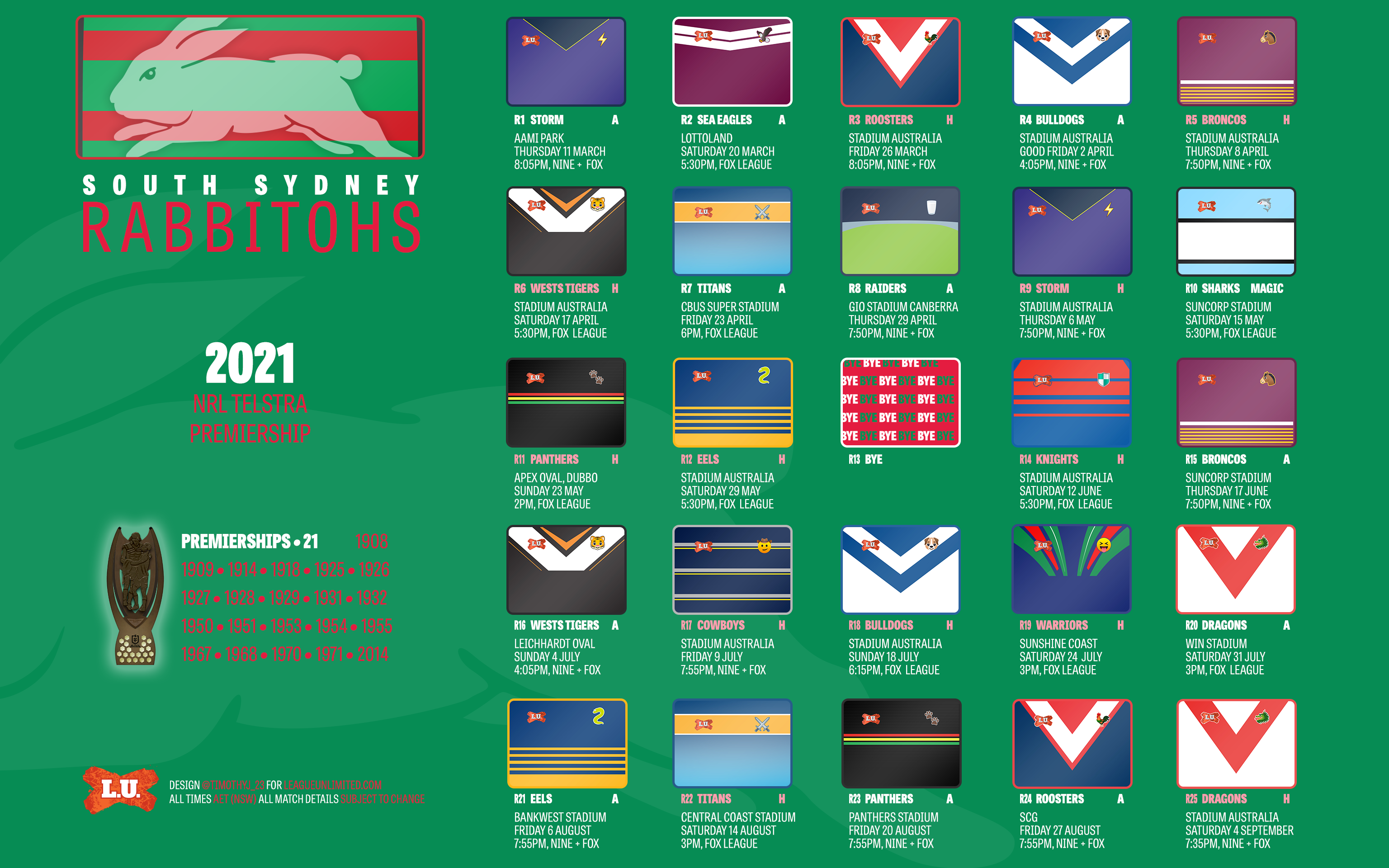 Last season the Rabbitohs were a Latrell Mitchell shy of pinching Penrith's spot in the grand final.

With a strong nucleus developed over several seasons, the X-factor's bung hamstring robbed Souths when it mattered most.

Now back in the No.1 with the club's premiership window wide open, the pressure on the former Rooster to ice the club's 22nd premiership is set to intensify with every passing week.

Up front, the demolition tendencies of Arrow should free up the skills of Cameron Murray.

Set to enter his fifth year in the cardinal and myrtle, Blues coach Brad Fittler underlined the significance of Murray's presence in lamenting the back-rower's loss to injury midway through last season's Origin series defeat.

Yet for all the class, the brains-trust of Cook, Reynolds and Walker will be key. How they adjust Souths' attack to modified defensive tactics and integrate the new recruits will not only shape their own form, but ultimately that of their teammates.

With 17 stars on the books capped at Origin or international level don't expect Souths' three uncapped rookies to crack the match day squad until later in the season, if at all.

Half-back Dean Hawkins and hooker Joshua Cook are both local juniors, who along with Newcastle back-rower Brock Gardner will benefit in elite company.

For Marshall and Knights off-cut Tautau Moga, 2021 is hardly their first dance but with limited spots on offer both will be bouncing about like it's their debut season.

A bargain buy, Marshall knows his place having covered for Bennett in the halves during his stint at the Broncos.

While for Moga, with just 14 games under his belt since 2017, Souths becomes his fifth NRL club. But if the 27-year-old strapping centre can stay on the park, he's definitely one to watch.