The Wests Tigers in 2020 extended their current finals drought to - fittingly - nine years in 2020.

In their 21 year existence, they've made the finals just three times. Coach Michael Maguire was lumbered with a badly managed salary cap and a horribly constructed roster when he arrived in 2019 and even now, after 2 full seasons, is he finally starting to build his own team. By the end of 2021 he will be able to field his own side.

The Tigers side has gone through plenty of player churn in the off-season and look to have the majority of their roster sorted, although there is still some doubt lingering over the spine.

They will again prove to be competitive for the most part which will see them avoid the dreaded wooden spoon, but whether they can reach the finals is a big question.

The Tigers are finally building some good attacking combinations on both edges.

They now have very good attacking options in the back row on both sides, with some quality attacking centres and wingers outside them.

Defence. Always defence. Only 4 times in their 21 year history has the clubs points difference been positive.

Last year though that figure blew out to 25.25 points per game, thanks to a streak of 10 games where they conceded 26 points or more.

The Tigers first 4 games of 2021 are all against bogey teams - Canberra, Sydney, Newcastle and Parramatta, then from Round 13 they'll face in succession - Penrith, Parramatta, Melbourne, Souths, Brisbane and Manly before a reasonable run home to the end of the regular season. 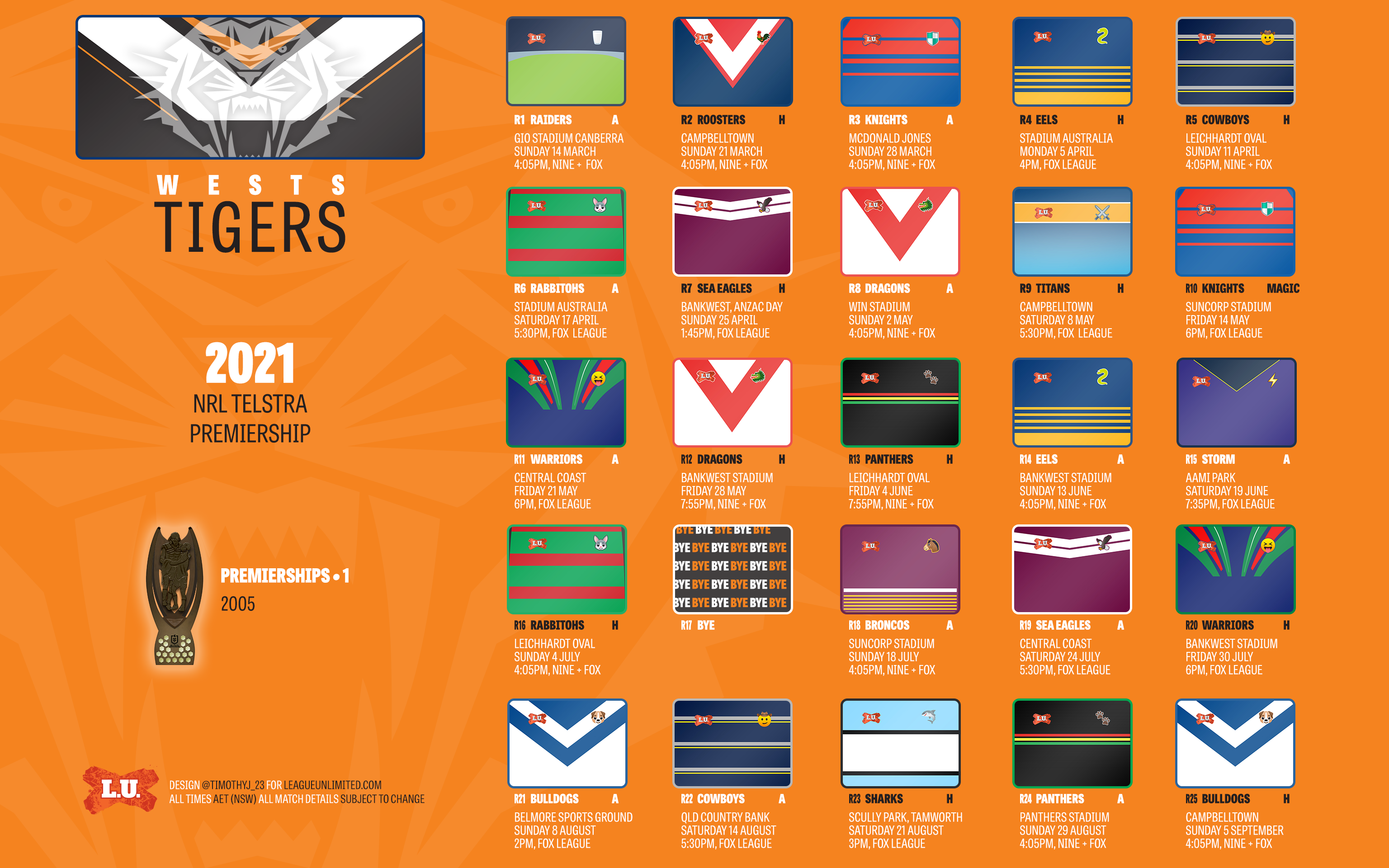 Halfback Luke Brooks will be in his final make or break season. He is two games shy of 150 games for the Tigers, yet has never appeared in a finals game.

With the club freeing up cap space in recent seasons and continuing to do so at the end of the year, he may well find himself being replaced. He is a very good half, with good skills as a playmaker, with a relatively strong kicking and passing game, while also being a handy exponent of taking intercepts. He's got plenty of toe too. But he has struggled to direct his side around the park.

He won't have Robbie Farah or Benji Marshall to help him anymore, and with less experienced players than him in the spine, he really needs to take ownership of this side in 2021.

James Tamou looks to be a very handy acquisition for the club, a born leader who will lead the side in the middle, an area that the Tigers have forever struggled with. If he can help improve the team defensively, he will be worth every red cent he earns.

Daine Laurie has been an exciting pick-up by the Tigers from the Panthers. The talented back is equally at home at five-eighth or fullback, has a good passing game and is very nippy around the ruck.

Jake Simpkin is a very talented hooker who could very well find himself on the bench as a back-up for Jacob Liddle, who has barely played any 80 minute games in his career thus far.

Jock Madden is touted to be a long-term halves option for the club and if he isn't partnering Brooks, he may well be replacing him in the years to come.