Take your medicine with a wooden spoon

When Trent Barrett was appointed as coach of the Canterbury-Bankstown Bulldogs for the 2021 season, his signing evoked nostalgia for the bygone days of "The Entertainers".

Renown for a free-flowing style of play that captivated supporters during an era of dominance for the club, "The Entertainers" were a far cry from what Canterbury had become in the years since reaching their last premiership decider.

Hoping to bring about change following years of declining performances and boardroom instability, the decision to give Barrett a shot at redemption was a convincing sell.

Having rehabilitated his image as an assistant after an acrimonious split from Manly, the one-time Dally M medallist was lauded for his part in taking Penrith from an up-and-coming squad to an attacking force.

Long-suffering fans agreed that a premiership was unrealistic, but the gospel according to management had everyone believing in a Canterbury side boasting a much-improved attack.

Supporters, sadly, discovered Barrett was not the brilliant tactician they thought he was.

Having averaged 14 points per game the previous year, the Bulldogs fared no better in 2021 and finished bottom of league with the worst attack and third-worst defence.

Winning a paltry three matches all year - the final of which came on the last afternoon of the regular season - Barrett's roster management saw 35 players used in first grade.

Suffering defeat after defeat with the occasional upset over Cronulla (18-12), St George Illawarra (28-6) and Wests Tigers (38-0) breaking up the monotony, the club managed to defy lacklustre on-field performances with success on the recruitment front.

Managing to woo several high profile players to commit to the club, including speedster Josh Addo-Carr and in-demand young gun Matt Burton, the most significant coup came in the announcement of Phil Gould as General Manager of Football.

Having taken Penrith from the brink of extinction to one of the most successful organisations in the league, Gould's return to the club, where he spent time as a player and won a premiership as a coach, will give Barrett the support and experience needed to weather the rebuild that lays ahead.

Finishing the year with a resounding on-field victory that finally delivered on the attacking hype, the Bulldogs will be hoping to carry the feeling of success into 2022. 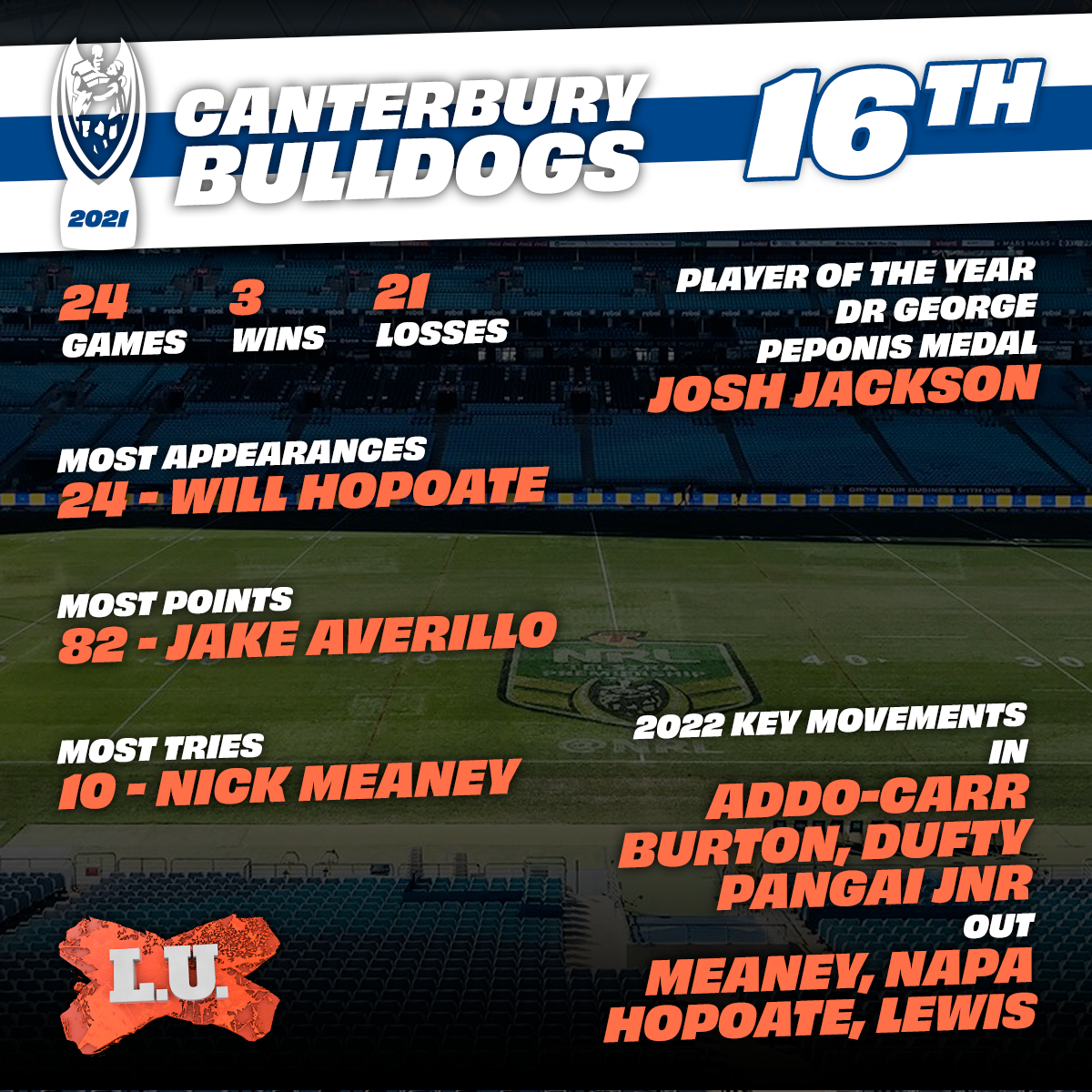 Unable to match it with the top teams and lacking the cohesion to dominate fellow also-rans, the Bulldogs needed things to go their way in order to compete.

During a two week period that reflected the tone of the year as a whole, the side headed into the Round 15 clash against Parramatta full of confidence after stunning St George Illawarra on Queen's Birthday Monday.

Leading 10-6 at halftime only to concede a penalty try shortly after the resumption for a tackle supporters deemed as sin bin sufficient, an avalanche of points followed as the Eels ran out 36-10 winners.

Heading into the following week with five players suspended for breaching COVID-19 protocols, a line-up more in keeping with a Canterbury Cup team were lambs to the slaughter during a 66-0 annihilation at the hands of Manly.

As Barrett fronted the press in the aftermath with a look of resignation at the side's plight, it became abundantly clear that the end of the season couldn't come soon enough for the boys from Belmore.

Taking an axe to the roster after persisting with players accustomed to losing for far too long, the Bulldogs were able to articulate a vision that appealed to players looking to cash in on an opportunity.

Gaining the services of highly sought after stars Josh Addo-Carr and Tevita Pangai Jr, Barrett's ties with players from his two stints at Penrith helped deliver Matt Burton, Brent Naden and Braidon Burns to the club.

Offering the incentive of short-term deals to Matt Dufty, John Asiata, Max King and Paul Vaughan, the need to increase depth at hooker saw Josh Cook come on board in a bid to earn a first grade debut.

Managing to re-sign several emerging talents and cutting ties with players deemed surplus to requirement, stakeholders will be far less forgiving of another 16th placed finish in 2022.

While attacking woes saw the side anchored to the bottom of the ladder for all but five weeks of the season, a lack of discipline on and off the field ensured players only had themselves to blame.

Missing Jack Hetherington, Luke Thompson and Dylan Napa on multiple occasions through suspension, an inexplicable display of selfishness from Lachlan Lewis cost the side two points for the taking when the five-eighth tackled Cody Walker off the ball after the halftime siren.

In an off-field moment equally bizarre, Lewis had his contract torn up following a practical joke that was greeted by the NRL with a reception usually reserved for a Happy Madison production released directly to Netflix

The NRL also imposed a $50,000 fine on the club in the wake of five players breaching COVID protocols as cases began to rise in Sydney, while Adam Elliott had his contract terminated after engulfing the club in another off-field incident involving alcohol.

Few players excelled for Canterbury over the course of 25 rounds, however an insight into the state of the club could be found in the polarising fortunes of Kyle Flanagan and Jake Averillo.

Finding refuge at Belmore following an abrupt departure from the Roosters, Flanagan struggled to command the authority needed of a player wearing the number seven jersey.

While the number on his back remained the same from twelve months earlier, his role was vastly different from that of the complementing learner gaining a real time education under the tutelage of Luke Keary.

Axed from first grade ahead of Magic Round due to a dismal record over the opening nine weeks, Flanagan's confidence never recovered after being recalled only to be dropped, less than a fortnight later, a further three times.

In contrast, Averillo gave hope to the blue and white faithful that better days lay ahead.

Playing throughout the backline during his rookie year, the Moorebank Rams junior proved to be one of the side's primary attacking threats with a move into the halves.

Relying on his natural strengths to register seven tries in 21 appearances, Averillo's growth as game manager could be seen as the year went on.

Both Flanagan and Averillo are contracted to Canterbury for a further two seasons. Both have shown talent through the junior ranks; yet their futures appear to be on vastly different trajectories in the big league.

Handing six players opportunities in the top grade throughout the year, the 2021 rookies fell into two camps: star juniors and reserve grade battlers.

Among the young guns blooded by Barrett, Jackson Topine, a versatile second-rower who was named Club Person of the Year in 2020 earned a call up for the New Zealand Maori before debuting on Good Friday; Aaron Schoupp, showed signs of promise in the centres to earn an upgraded deal; Bailey Biondi-Odo, provided great impact off the bench as playmaker with several dazzling tries; and Chris Patolo, offered size in limited appearances late in the year.

Journeyman hooker Brad Deitz achieved an unexpected call up after years of toiling away in front of friends and family; while Kiwi centre Falakiko Manu benefitted from an opportunity afforded by the five players forced into quarantine for breaching COVID-19 measures.

Winning just six matches since the onset of COVID-19 last year, the Bulldogs won't be able to justify another poor season based on their impressive recruitment drive.

Boasting a backline brimming with speed and a pack capable of going forward with impact, the biggest question remains over the lack of experience throughout the spine.

Having pinned their hopes on Matt Burton, a supporting player in a premiership winning team, the rising star will be expected to own the result in a team where just winning a game is treated like a grand final.

With Kyle Flanagan watching on from reserve grade as a real time example of the pressures faced by young players tasked with roles beyond their years, the Bulldogs will need their playmakers firing or else the money spent elsewhere will be for nought.