Andrew Jackson looks back at the 2021 campaign which saw the Brisbane Broncos shed the wooden spoon - but they didn't climb too much higher.

Five years prior, a Kyle Feldt try in the dying seconds had brought the North Queensland faithful to its feet and Darius Boyd to his knees.

A piece of history taken away in a matter of seconds.

Fast-forward to 2020 and Feldt again was crossing in the corner, three times, to seal Brisbane's fate once more.

This time there was no denying the Broncos this piece of history, an unwanted one, wooden spooners for the first time in the club's history.

So, in a bid to move forward, Brisbane went backwards - in time, that is.

Back to the glory days and led by club great Kevin Walters, who would remind the playing group just what it means for play for one of the league's proudest organisations.

Despite a 14th-place finish there was still plenty to be proud of, particularly in the second half of the season. 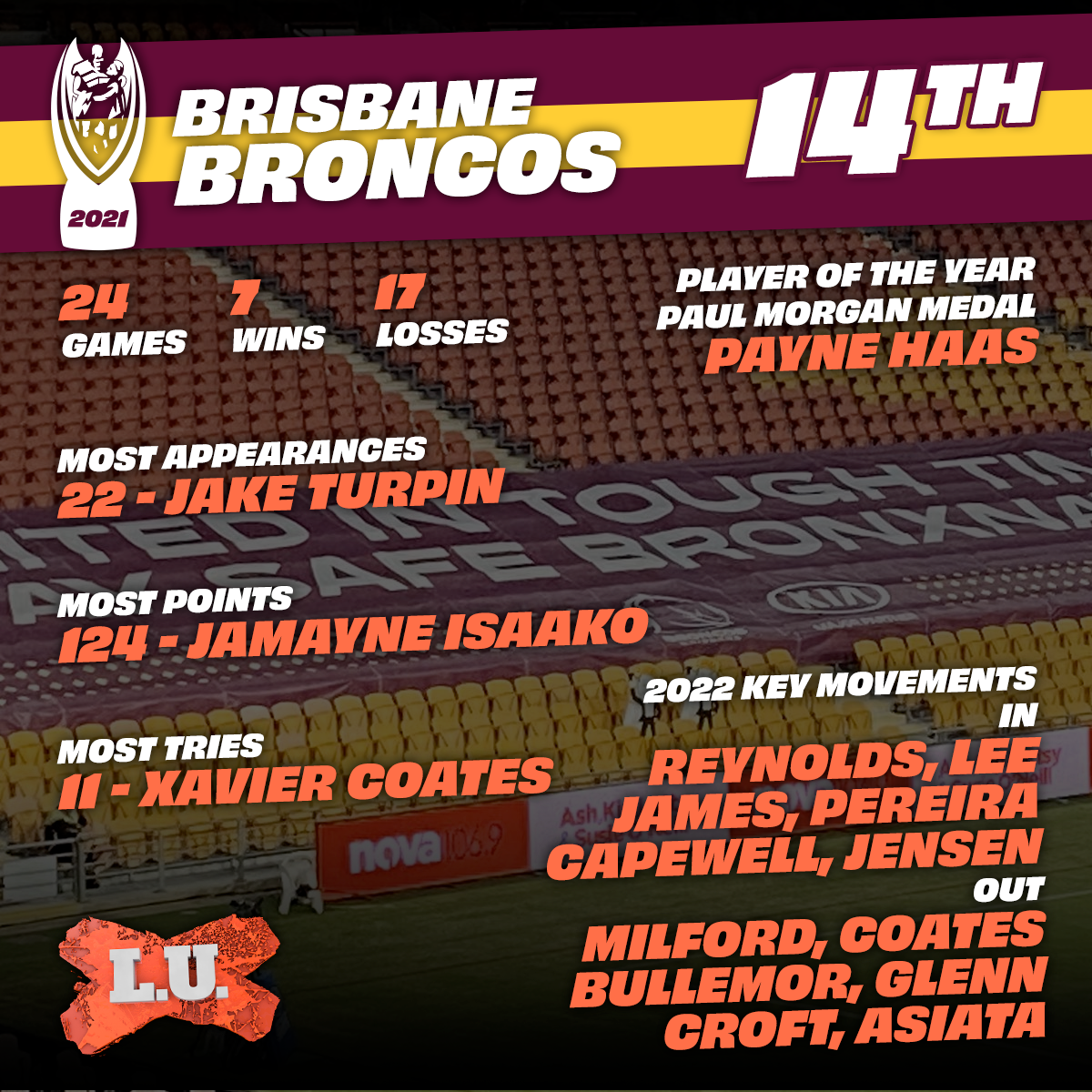 Dwelling on a 46-0 loss to Souths, Walters boldly declared everything the team did would be completely different when the playing group returned in a fortnight's time.

"The players are on break, when they come back things will be totally different. The way we prepare ourselves and the way we play as well," he told Triple M at the time.

It was not just hollow words either, with a 42-24 loss to the Tigers the only real sour point in an otherwise promising end to the season.

In the latter stages of the year, it was completely different.

Tight losses to Newcastle, Penrith and the Roosters in particular proved the Broncos turned a corner in that sense.

Not much but if there is one area Brisbane showed promise, it was second-phase play.

The Broncos boast, at least on paper, one of the best young forward packs in the business but it rarely told on the stats sheet.

Haas would regularly top 100 run metres but struggled to get much help.

Offloads, however, were one way to better test opposition defences and help spark more go-forward.

The Broncos finished third for offloads in 2021, although Tevita Pangai-Junior and Matt Lodge were two of their best second-phase contributors and both are gone now.

Too often, at least in the first half of the year, the Broncos simply wilted under pressure.

Take the six games they conceded 40 points or more - in all of those matches they let in either three or four tries in 10-minute periods.

That spoke to the way Brisbane fell apart, both mentally and physically, when facing sustained scrutiny on its goal-line.

It improved as the season went on but Walters will want to make sure those same habits don't creep in next year.

Continuity in the halves did not help either when it came to Brisbane's attack.

Walters defended his halves merry-go-round, claiming he was fair in his selections and simply trying to find out who would be the ideal halves partner for Adam Reynolds in 2022.

It makes sense as a long-term approach but in the short-term it definitely had an impact on results.

Even during Brisbane's dark period to open the season, there was one constant - Payne Haas leading the way.

Walters said as much in the lead-up to an upset win over the Roosters, challenging every other player on the roster to mirror the big man's efforts up front.

Haas averaged almost 170 run metres in the 2021 season and was a handful to put down with each carry.

The team's overall form never had an impact on Haas, who has quickly proven himself a genuine leader at Brisbane.

In terms of other quiet achievers, Selwyn Cobbo showed glimpses of spark at the back to put his name forward as a long-term option at fullback.

Meanwhile, Herbie Farnworth has established himself as a dependable option in the outside backs with a strong running game and solid decision-making in defence.

Kobe Hetherington, who took out Broncos Rookie of the Year honours, certainly has long-term potential at lock.

Having come through the system at hooker as well as in the halves, there is plenty of time for Hetherington to develop his ball-playing skills.

It will only make him an even more valuable addition in the pack having proven himself to be an aggressive force up front in his stints off the bench this season.

As mention earlier, Cobbo also quickly established himself as an exciting prospect at the back with his maiden NRL try against the Raiders proof of his clever instincts.

Adam Reynolds is a genuine leader to guide the Broncos towards a brighter future.

The loss of Xavier Coates will hurt but is outweighed by some shrewd purchases, with Kurt Capewell and Ryan James also adding some valuable experience up front.

With an exciting backline and much better balanced forward bolstered by the return of Patrick Carrigan, Brisbane will be pushing for a top-eight berth in 2022.