Sam Bourke's deep-dive into what went wrong to see the Canberra Raiders fall out of the top eight in 2021.

Canberra came into the 2021 season as a solid pick in most pundits Top 4 and expected challengers to the likes of the Storm, Panthers and Roosters for the premiership. Off the back of a Grand Final in 2019 and a Preliminary Final in 2020, the Green Machine were primed and ready to deliver for their long suffering fans who had visions of the Provan-Summons trophy being driven back down the Hume Highway come the first Sunday in October. These dreams however turned into a nightmare, as the Raiders became without doubt the most underwhelming side of 2021.

The Raiders were sluggish but effective to start the season winning three of their first four, however it was their first loss at home against the Warriors that set alarm bells ringing. Leading 31-10, Canberra completely returned to their unwelcome alter ego ‘the Faiders' when they inexplicably went down (albeit from a last gasp tackle from Roger Tuivasa-Sheck in the dying seconds) losing 35-31. While it seemed a blip at the time, it unfortunately set off a theme for the season where they had a heap of bad luck mixed with glimpses of a side that will surely overcome and get results.

Canberra fell into a deep hole, where they dropped 5 matches on the trot, struggled to remember how to beat the last placed Bulldogs in Magic Round and were in free fall halfway through the season with key injuries to mainstays in fullback Charnze Nichol-Klodstad and captain Jarrod Croker not helping their cause. The sudden and nasty exit of English halfback George Williams which was grossly played out in the media, led to finger pointing and the airing of dirty laundry which teared the once harmonious squad to shreds and an absolute shellacking in front of their home fans by the Titans in Round 16 proved to be their rock bottom on the field.

From there, the Milk made a desperate late charge to win four out of their next five games, but left their run far too late, when they faced the competition heavyweights in Melbourne, Manly and Roosters in their last month of football. They failed to collect any competition points from those matches, leaving the Raiders to finish in a hugely disappointing 10th spot on the NRL ladder. 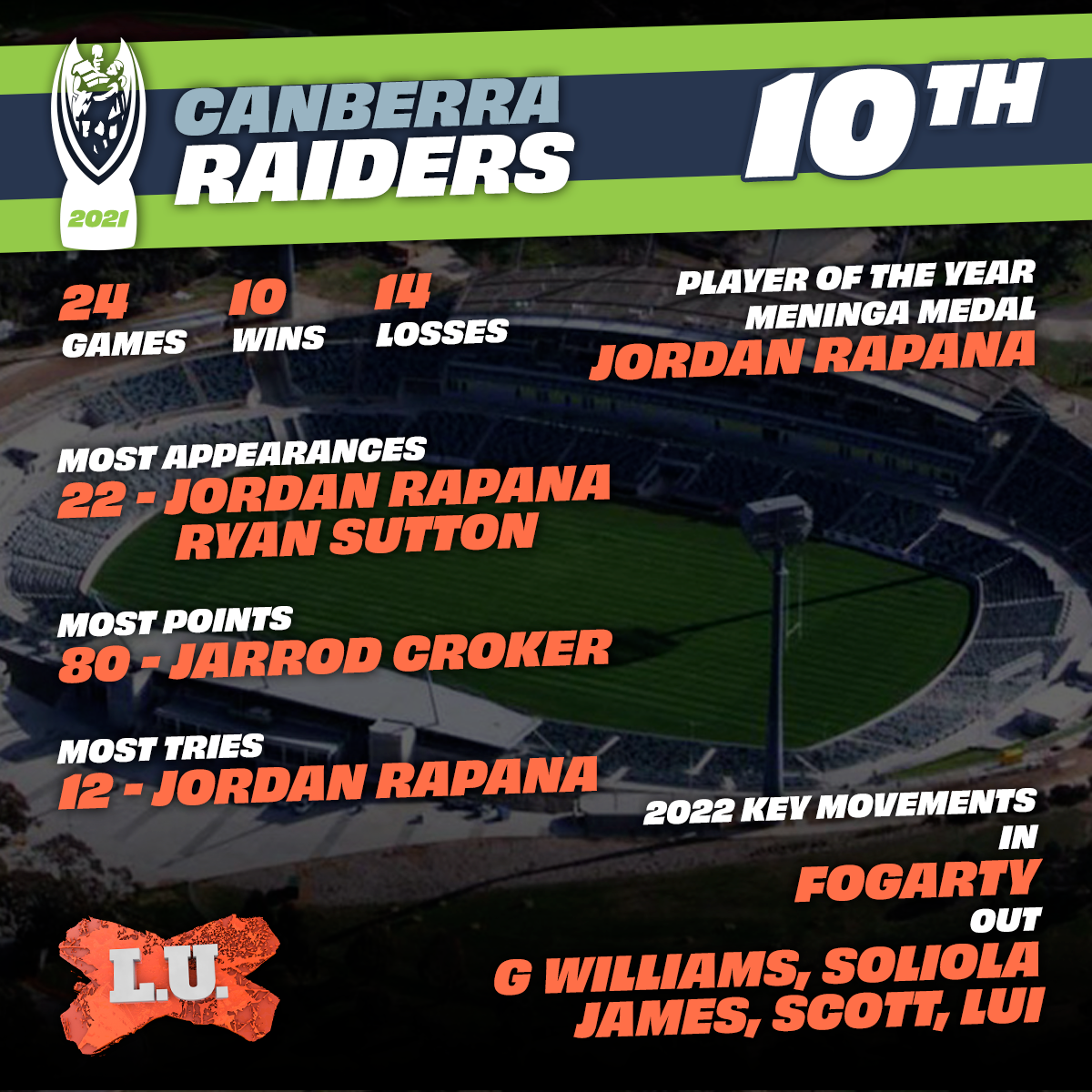 Following the messy exit of star Englishman John Bateman in 2020, history repeated itself in the nation's capital with the exit of England half George Williams. Rumours began to surface in April during the Raiders mid-year form slump that Williams was looking to leave his contract early (which was due to end in 2022), to return to England at the end of the year. The allegations then exploded in the papers, when coach Ricky Stuart not only agreed to a release but sensationally chose to end Williams' contract effective immediately. This ended Williams' 32 game career in the lime green, with the club allowing the former Wigan number seven to return home for family reasons. The fallout from the decision torn the club apart, with finger pointing coming from ex-players, current players, coaching staff and various ‘sources' in the media who wanted to have their say about what really was going on behind closed doors.

Williams then responded on Twitter, advising that instead of the club supporting his struggles with homesickness, the club had callously cut him adrift. The media then continued to have a field day with the issue, which culminated in their captain Josh Hodgson standing by his English teammate and relinquished the captaincy as a result. The club became fractured and from there the team never regained their focus.

The Raiders marketing has really been outstanding in recent years, with the addition of the Viking Clap at home games and they struck gold again with their heritage jersey paying a homage to their 1994 premiership jersey with iconic sponsors Canberra Milk coming on board to return as the major sponsor for the 2021 season. The jersey proved an enormous hit before a ball was kicked in 2021, with the classic jersey selling out twice after failing to keep up with demand. News Limited reported the club making an estimated $2.2m profit from the nostalgic Milk jersey….gee they must have sucked if the best thing was their jersey..ok I digress.

While finishing in 10th place can be assessed as a complete write off considering their roster, the loss of key personnel was offset by the unearthing of potential backline superstars in Xavier Savage, Harley Smith-Shields and Matt Timoko.

The player who created the most attention in just 3 first grade games was speedster Xavier Savage. The Cairns junior made his debut off the bench against the Dragons in Round 15, when he was accidently used as an 18th man. However it was his eye catching performance when handed the fullback jersey which will have Canberra fans excited, where he made two linebreaks and scored an electric try in a superb 34-18 win over the Sharks in Round 18.

Centre Matt Timoko and winger Harley Smith-Shields also developed a potential lethal right edge combination in the back half of the season. Their successful introduction to first grade gives Ricky Stuart a nice headache Round 1 in 2022 with all three young guns sure to keep their seasoned veterans in Croker and Rapana on their toes in the pre-season.

However, the new rules in the ‘V'landysball' era didn't suit the big forward pack that Stuart had assembled over the past few seasons. The coaching staff continued to chop and change looking for the right combination to keep up with the fast style of football being played. These decisions led to disharmony amongst the playing group, which exploded with another off field scandal when forward Joseph Tapine's partner chose to vent her frustration on social media. However, Mrs Tapine was not alone in these thoughts. With the Raiders spoilt for choice in their forwards, they seemed to shuffle players in and out of their game day 17 after each loss, which simply did not allow for any continuity. It seems like if you dropped a ball or made a mistake, out you would go for a week simply because the club had depth. The bench rotation was also questionable, with Hodgson and Tom Starling not used as a simple one, two punch combination out of dummy half that the more successful sides like the Storm where utilising with their dummy half duo. Rather, both were left on the field, with Hodgson as a floater, which ultimately cut the minutes of the engine room and unfortunately it was to their detriment too often. The Raiders have to look to get more impact from the pine if they can kick away from sides down the stretch, as they simply looked flat towards the backend of games on far too many occasions.

Jordan Rapana turned back the clock, with the 32 year old veteran winger showing his experience and versatility filling in at centre and fullback at various stages of the season. Rapana's efforts in taking the tough carries when his side were on the back foot, combined with his gut busting cover defence when in the custodian role was inspirational to his younger teammates and the Kiwi winger more than earned his two year extension at the conclusion of the season. With Rapana likely to return to his familiar wing position next year, he may prove as valuable at training bringing the next generation through, than when he is wearing the number 5 jersey on game day.

Are Canberra rebuilding or are they a recruit away from being a premiership force? That's the question when you look at their squad for 2022 so far.

The biggest riddle to solve was their halfback role and they have gone after the steady hand of Jamal Fogarty from the Titans. In theory Fogarty looks the perfect fit for unlocking Jack Wighton's lethal running game and taking the lead with the kicking. The other issue is whether hooker and club legend Josh Hodgson's time in the lime green has come to an end? If reports are to be believed then that is a huge call, as it leaves Tom Starling as the sole cover at nine and if injuries strike then things could get messy in what has proved such a key position under the new regime of six agains and lack of discipline from exhausted players around the ruck.

The Raiders have some talented players but can Ricky Stuart find the magic or has the premiership window closed?