The Sharks have been doing a rather commendable job of rebuilding their elderly Premiership winning side of 2016 - one of the oldest squads to ever win a Premiership, navigating a sacked and deregistered coach and a high volume of churn to their squad through contracts ending, rotating in new blood and rookies and the ever constant injuries that befall all teams.

2021 saw coach John Morris dumped, with assistant Josh Hannay filling in until new coach Craig Fitzgibbon takes over for the 2022 campaign. It was the Sharks worst season defensively since they claimed the wooden spoon in 2014.

But in a positive, it was their best attacking season since their celebrated 2016 season. In 9 of their last 10 seasons, the Sharks have managed to win at least 10 games.

The Sharks had a woeful start, recording just 2 wins from their opening 10 games to sit third last. They then won 6 of their next 8 games to climb back into the top 8, but a poor finish resulted in just 2 wins from their remaining 6 games, ultimately costing them a place in the finals (they finished equal on competition points with the 8th placed Titans, but had a marginally worse points differential).

The Sharks have made some marquee acquisitions, providing their fans with plenty to look forward to in 2022. 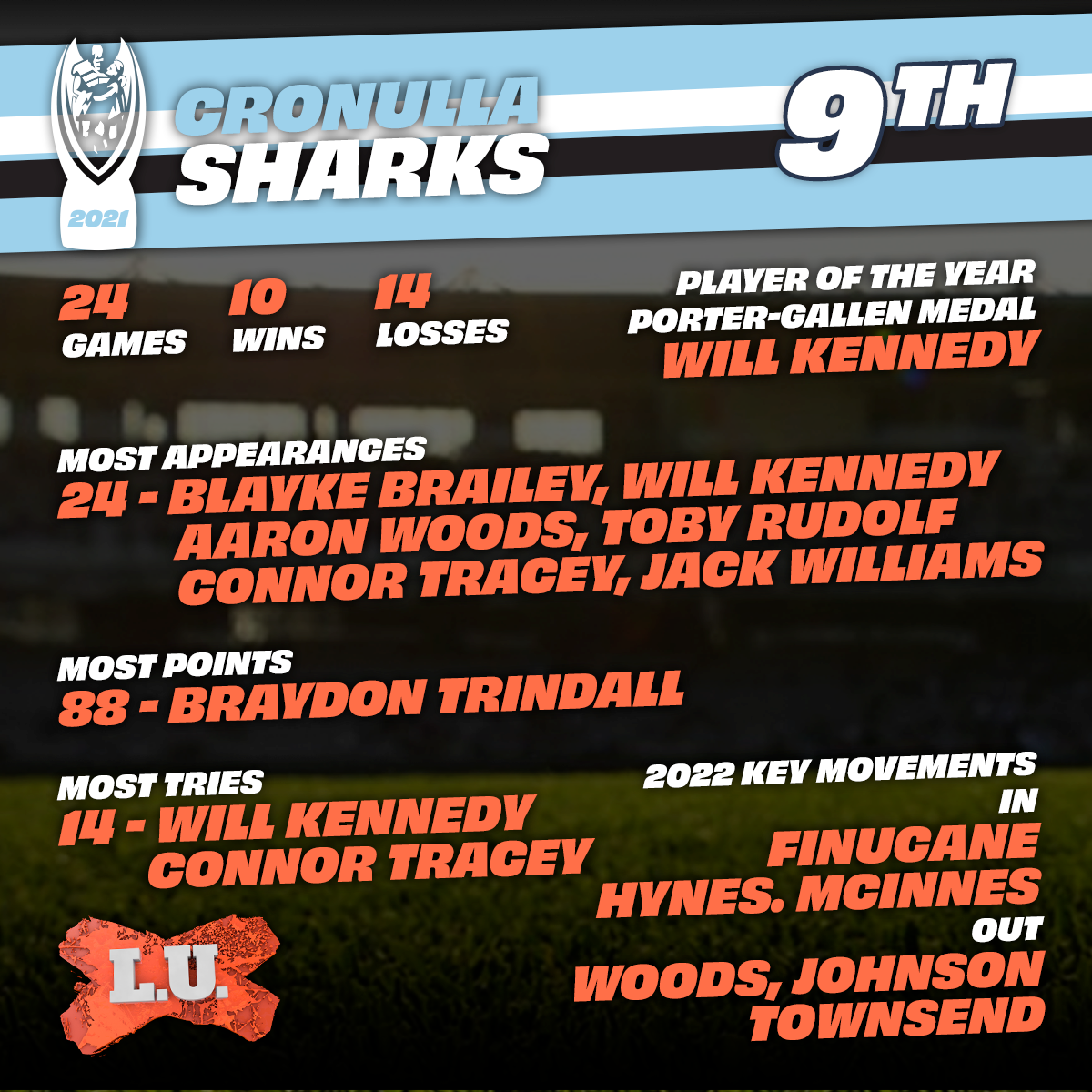 Round 9 v Penrith - The Sharks had won just 2 games at this point and were coming off their heaviest defeat of the season to date - a 40-14 loss to Melbourne - the previous week. They were decimated by a red hot Penrith side who handed the Shire outfit a 48-0 flogging.

The next week Cronulla were much better in attack and gave Souths a genuine scare, before going down 32-22. It was a marked improvement which lead to Cronulla winning their next 4 games against the Dragons, the Titans, Penrith and the Cowboys. They also scored 2 more wins over the following 4 weeks to surge into the top 8.

The Sharks right side - It worked so well that Cronulla shifted the ball right more often than any other team in 2021. The Sharks right side contained a combination of strong ball runners like Briton Nikora and Jesse Ramien as well as speedster and prolific try-scoring winger Siona Katoa out wide. Throw in the ever improving roving playmaking of William Kennedy and it made for an irresistible temptation for the Sharks attack.

Will Kennedy - The dynamic fullback had his best season yet and his development is coming along in leaps and bounds. Compared to 2020, Kennedy in 2021 scored 11 more tries, had 3 more try assists, 9 more line breaks, averaged 44 more run metres per game, had over 400 more kick return metres, improved his tackling effectiveness, further developed his short kicking game, which resulted in 10 forced drop outs, 8 more than the previous season.

Braydon Trindall - Trindall's second season in the NRL and his first genuine full season saw him show good composure and playmaking ability, so much so that it lead to the club allowing their Premiership winning halfback Chad Townsend to sign with the Cowboys for 2022, before being released earlier so as to link up with the Warriors for the rest of the season. With a good pack and a genuine attacking 6 beside him in 2022, Trindall looks set to improve even further.

Blayke Brailey - Brailey's third season saw his performances drop a little compared to 2020, however he is still a vital and impressive cog in the Sharks attack. With more support coming to the side to help him defensively, he could very well find that attacking spark in the final 20 minutes of games that Sharks sorely missed this year.

The Sharks have just 2 players remaining from their Premiership winning side in 2016 - captain Wade Graham and prop Andrew Fifita. Halfback Chad Townsend has essentially been replaced by the impressive Storm utility back Nicho Hynes, Aaron Woods has been replaced by Storm lock Dale Finucane and Josh Dugan's departure has been covered by the acquisition of Roosters winger Matt Ikuvalu. The Sharks have also moved on Shaun Johnson, Will Chambers, Billy Magoulias and Nene Macdonald. They've also picked up handy defensive rake/lock Cameron McInnes. They have made genuine upgrades exactly where they need them.