On Tuesday, the full draw for the 2022 NRL Season was revealed. In this piece, we look at the breakdown of games and strength of schedule.

This is the golden timeslot that had for so long been dominated by the Broncos, however after back-to-back seasons as whipping boys, sitting at the wrong end of the table, the dominance the Broncos once held over this timeslot has almost gone. They still have the most appearances at 14 on Thursday and Friday nights, however so too does Manly, with Premiers Penrith appearing 13 times. Souths have 12 and Melbourne 11 games on Thursdays and Fridays.

Canberra and the Wests Tigers have the fewest, with just 3 apiece, the Dragons the next worst with 5. The Bulldogs, who had just 2 games allocated to them on Friday in last years draw (when it was released) and zero Thursday games, have been the big winners here, jumping up to 8 appearances despite collecting the wooden spoon last year. 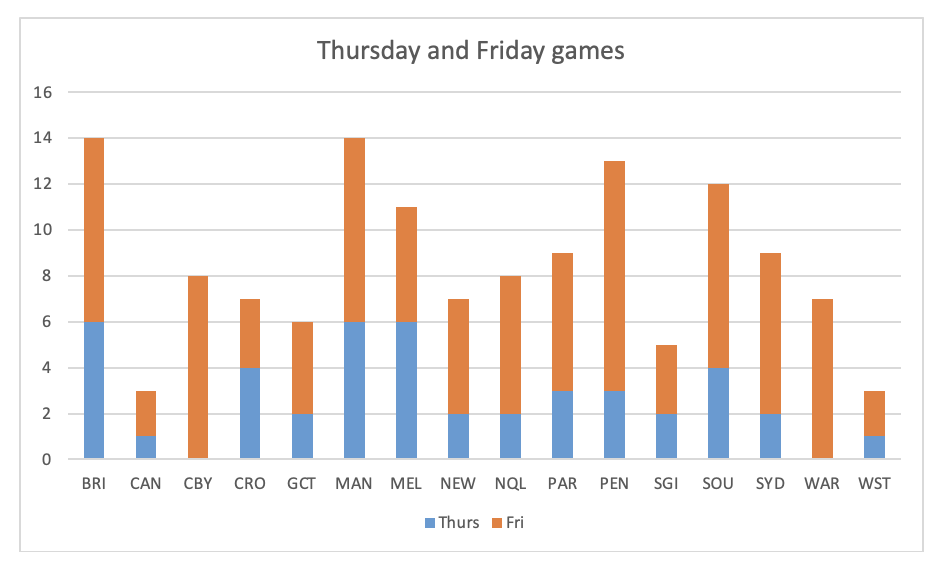 This is calculated purely on the ladder ranking of every team at the end of the 2021 regular season. Last year there was a rather noticeable gap here, but this has largely been rectified for 2022. The Bulldogs have the toughest draw in this aspect with 7 of their games against top 4 sides (4 of those games happening in succession from Rounds 3 to 6) while they have 9 games against teams ranked 10th or lower.

Parramatta and the Roosters will play all of the top 4 sides twice, while the Storm, who finished first at the end of the regular season last year, will play the other 3 Top 4 sides twice each as well. The Warriors have landed 7 games against the top 4.

The Titans, Cowboys and Dragons play the fewest games against top 4 sides, with 5 apiece. Manly, who finished 4th, play the other 3 remaining top 4 sides 4 times.

The total number of days turnaround is very similar for all teams, with the Roosters having the fewest at 171 days combined, while Canberra, Cronulla and Penrith all have 177 days.

The Knights, Cowboys and Dragons are the only teams to not have any 5 day turnarounds, while Canterbury, Cronulla, Manly, Parramatta, Penrith and the Wests Tigers all have 3 games with just a 5 day gap. 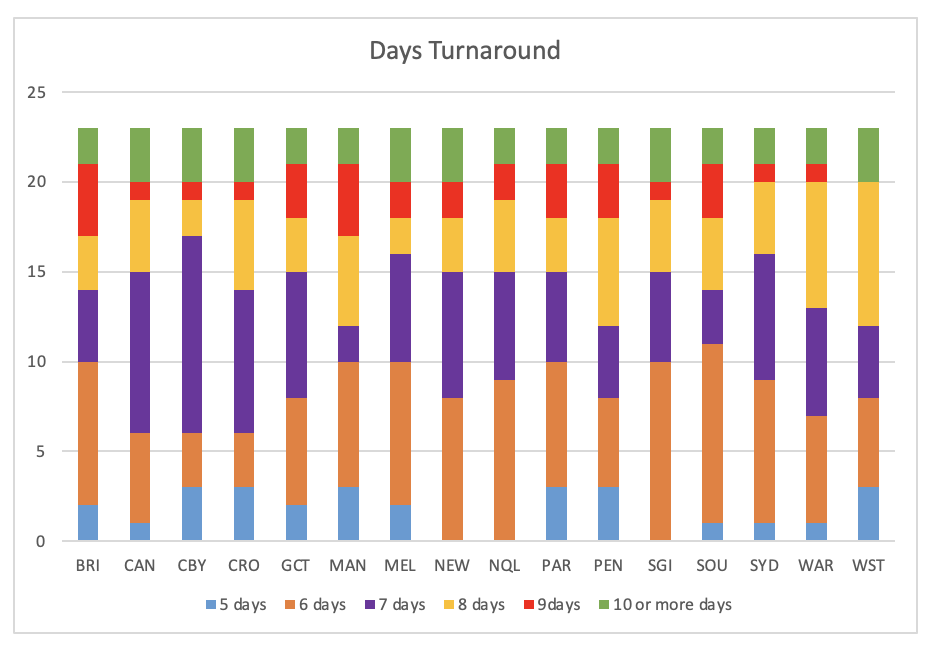 On this chart, the teams with the biggest purple section will essentially have the more stable draw, as they will have a full 7 day gap between games more often. Souths have 11 of their 24 games being played with less than a full week gap, while Canberra, Canterbury and Cronulla have just 6 games in this same category. This means Souths could be impacted by fatigue more than the Raiders, Bulldogs and Sharks.

Manly, Penrith and the Tigers all have 11 games with more than a week turnaround between games.

After calculating the number of Thursday and Friday night games, number of games against top 4 sides, total strength of opposition and games that have less than, more than and exactly 7 days turn around and come up with the following order, from toughest draw to softest: