Contrary to the supposedly infallible belief of people who claim to have the game's best interests at heart, defence is not a dirty word.

Attacking football can be exhilarating and make casual fans into committed supporters, but, when all is said and done, defence is what makes rugby league so compelling.

In a year that saw multiple blowouts every weekend and point-scoring records fall at a farcical rate, defence ultimately proved the difference when it mattered in the big end of season fixtures.

Being able to score points is essential to achieving success in rugby league, however, if a team consistently posts more than 20 points a game and still comes up short, it doesn't take a learned person to know their priorities in defence need to shift.

Such was the case for the Gold Coast Titans in 2021.

For the premier teams in the league, bowing out in the first week of the play-offs with a record of more losses than wins would be little cause for celebration.

Ultimately, though, the Titans' season is best understood in context.

Two years ago, the league's newest club finished in last position and facing an existential crisis.

What had the Gold Coast ever achieved and would anyone care if the side went the way of their predecessors?

The Titans recognised their crossroads moment and went about change for the better.

In Justin Holbrook's first year as coach, the side finished ninth and netted the signatures of rising superstars David Fifita and Tino Fa'asuamaleaui.

Taking further strides twelve months later to secure a finals appearance for the first time in five years, the Titans revelled in matches where their attacking strengths came to the fore.

Damningly, the side fell dispiritingly short in contests where points were at a premium.

The Titans will be striving for further improvement in 2022 with an aim of making back-to-back finals for only the second time in history.

Whether they can take the next step will depend on one thing... 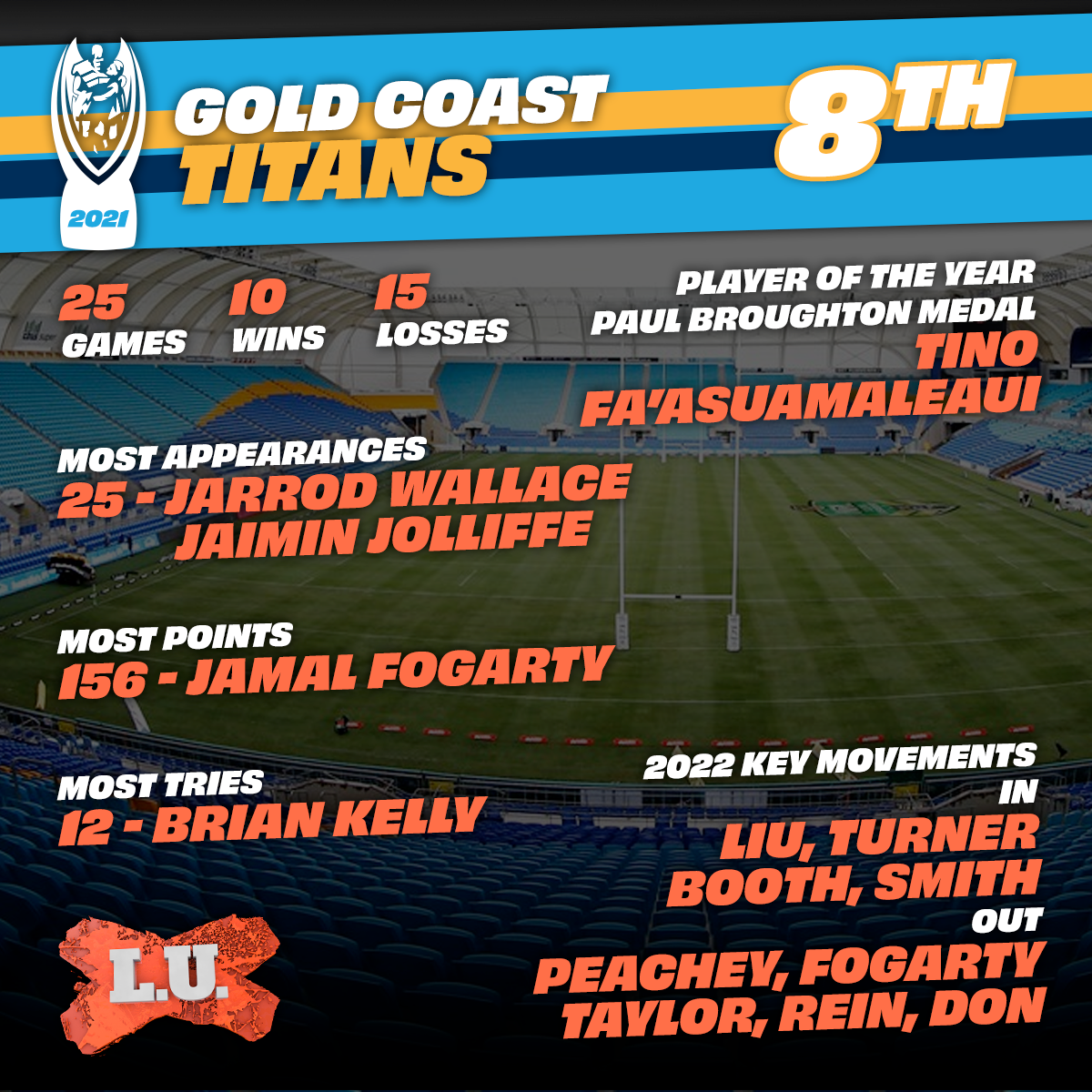 If there was one match that encapsulated the Titans for better and worse in 2021, the Round 14 encounter against the Roosters fit the description to a tee.

Taking place on a Saturday afternoon days after the opening State of Origin fixture, the side produced the highest losing scoreline of the season with a dazzling display of attacking football.

Trailing 4-30 shortly after the resumption of play before hitting the lead for the first time with eight minutes on the clock, the side's inability to close out proceedings proved fatal with Roosters' rookie Sam Walker kicking the visitors to a 35-34 victory.

The result did little to engender confidence for coach Justin Holbrook as the side followed the Roosters performance with a spectacular collapse against the Sea Eagles (56-24) before pummelling the Raiders (44-6) in the nation's capital.

In a competition where success is reliant upon consistency and resolve in defence, the Titans were found wanting frequently throughout the season.

Few teams were as entertaining to watch in 2021 as the Titans when afforded the opportunity to play attacking football on their own terms.

Capable of scoring tries from inside their own half with a blend of speed, second-phase play and raw strength, marquee signing David Fifita embodied this mentality with 17 tries, 22 line breaks, 44 offloads and 155 tackle breaks.

Boasting the sixth best attacking record with an average winning margin of 24.6 points, the side delighted supporters with 40-point hauls against the Cowboys (44-8), Knights (42-16) and Raiders (44-6).

Faced with a season-defining final round encounter against the Warriors on home soil, the Titans recorded their largest win in history with a 44-0 demolition to secure a place in the finals - albeit in one of the weakest premierships seen in the NRL era.

When things were going well for the Titans, you could be assured of a high-scoring game.

When things were going well…

Being able to win through defence is a trait that requires years and years of refinement.

In addition to the physical demands required of players, the mental exertion separates the genuine contenders from those who are merely making up the numbers.

The Titans were incapable of grinding out tight matches to their detriment in 2021.

The smallest winning score the side posted all season was 28 points against cross-town rivals Brisbane in Round 2, while there were only six games all year - including the Elimination Final against Sydney - where a win or loss was decided by eight points or less.

Being able to pile on try after try against lesser teams may do wonders for a side's for-and-against, but without an ingrained commitment to maintaining a defensive line, on-field success can only go so far.

When the Gold Coast Titans announced the signature of Tino Fa'asuamaleaui a year in advance, the jury remained out on a young forward with plenty of promise but few accomplishments to safely justify the show of faith.

In hindsight, the Titans were on the money in their pursuit of the towering tyro.

Arriving on the Gold Coast as a premiership winner and State of Origin representative, the 21-year-old was a stand out in the forward pack with 51 tackle breaks and an average output of 136 metres, 55 post-contact metres and 29 tackles each week.

Rotating between lock-forward and front-row over the course of 22 matches, Fa'asuamaleaui claimed the Paul Broughton Medal as Player of the Year along with interest from the club to upgrade his deal into the future.

Blooding three fresh faces in first grade throughout the year, Jayden Campbell, Greg Marzhew and Toby Sexton all left impressions as players of the future.

Becoming the first legacy player at the Titans as the son of Preston Campbell, the club's foundation signing, Campbell showed touches of speed and finesse to put himself firmly in the frame as the club's long-term number one with five tries in seven appearances.

Making his long-awaited debut after starring as a junior at the Gold Coast and Parramatta, Marzhew churned through plenty of work to take the place of club legend Anthony Don on the wing.

Earmarked as the club's first-choice playmaker after an impressive introduction to first grade, Sexton showed plenty of confidence late in the season after biding his time in Queensland Cup.

The Titans are well on the way to becoming a competitive squad thanks to a mixture of experienced campaigners and exciting young guns.

The decision to back Toby Sexton over Jamal Fogarty will have a significant influence on where the side finishes up at the end of 25 home-and-away fixtures.

Little known dummy half Aaron Booth shapes as a key signing following the departure of Mitch Rein; the Titans will be hoping the 26-year-old can have a similar influence as Harry Grant, Slade Griffin and Rory Kostjasyn in chasing success after coming through the ranks at Melbourne.