Find a way to win (with a fit team)

Sometimes it doesn't matter what the performance looks like, all that counts is being ahead when the fulltime siren sounds.

A Round 15 match ending 10-6 may not mean much to most teams, but at the end of the regular season it can make all the difference.

For the Newcastle Knights, a rain-soaked win over the Warriors in June, which saw Mitchell Pearce return from injury, breathed life into a season that until then appeared to be mere moments away from last rites.

Sitting in 14th position with just five wins at the midway point of the year, coach Adam O'Brien issued a reset, which sparked the side into life with seven wins over the remaining ten rounds.

Sealing a place in the finals on their own merits via a Pearce field goal in the penultimate round, an Elimination Final showdown against the Eels went down to the wire before a penalty try saw the side bow out in seventh position.

As Pearce and co walked from the field in Rockhampton, lamenting what might have been, a philosophical outlook could be taken on an ultimately successful year.

Beginning 2021 with expectations of being one of several teams vying for a place in the bottom half of the top eight, a strong opening fortnight was quickly subdued after Pearce - relieved of the captaincy following an off-season indiscretion - suffered a torn pectoral muscle for the second time in four seasons at the club.

A series of heavy losses followed in the halfback's absence, while fleeting moments of hope were interspersed against Cronulla (26-22), Canberra (24-16) and Manly (18-10) to keep the finals flame alight.

Returning in front of an ardent group of supporters braving the wet after a ten-week layoff, the Knights found a way to get back on track with Pearce having a hand in both tries against the nomadic New Zealanders.

The unrefined performance may have mirrored the conditions, but sometimes being ahead 10-6 at the end of 80 minutes is all that counts. 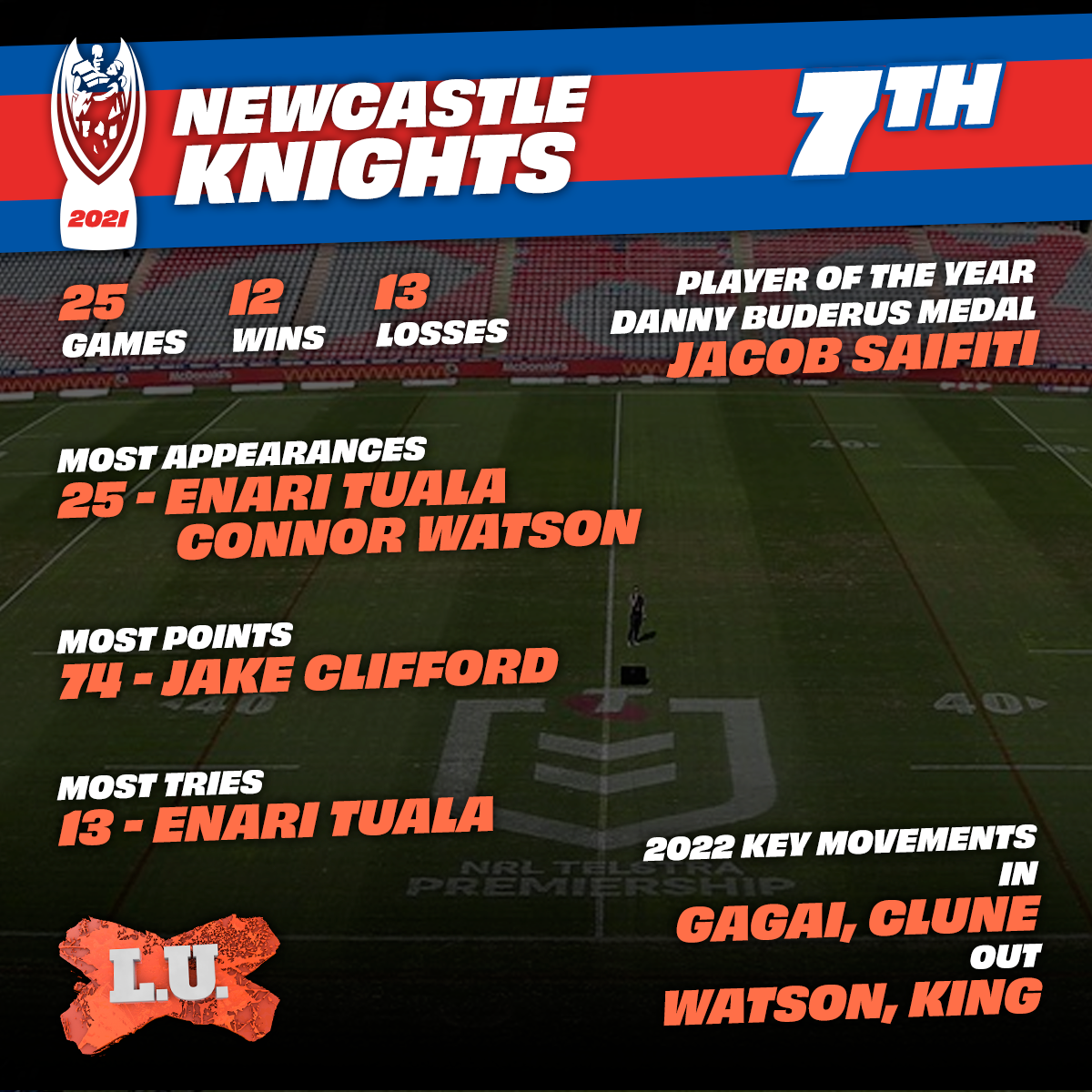 Having achieved middling results with Kurt Mann, Phoenix Crossland, Connor Watson and Blake Green at five-eighth, the early arrival of Jake Clifford proved instrumental in the side's revival over the second half of the year.

Initially set to join the club from North Queensland for 2022, a protracted mid-season release saw the talented playmaker make his final appearance in Townsville on a Friday night before arriving to cheer his new teammates home two days later in Newcastle.

Struggling early on to make a dent alongside teammates whose names had to be learned on the run, Clifford's confidence mirrored that of the team as he lined up alongside Pearce, Kalyn Ponga and Jayden Brailey for the first time in Round 16.

Much was made of Newcastle's shocking for-and-against differential, however a more revealing story lay in a different set of numbers.

Winning nine matches by eight points or less during the regular season - the most of any team in the premiership - the Knights lived for contests decided in the dying stages.

While it would be naïve to attribute the side's grit to any one individual, coach O'Brien's show of faith in long-time friend Anthony Seibold was credited for helping instil greater resilience in the playing group.

Joining the club as a part-time consultant before gaining an expanded hands-on role midway through the year, the former Dally M Coach of the Year found results with a roster willing to respond to his methods.

Whether it was a blockbusting run from Bradman Best, a trademark piece of brilliance from Ponga or the experience of Pearce coming to the fore with a one-pointer, the Knights were able to win tight matches during a year where blowout scores became the norm.

Injuries come with the territory of rugby league; however, few sides struggled without their best players quite like the Knights.

Adding to the injury woes, Blake Green's comeback from an ACL tear lasted six matches before father time caught up with the veteran playmaker, while Queensland winger Edrick Lee failed to take the field once after fracturing his foot on the eve of the season.

As a result of being unable to field their strongest line-up until late in the season, the toll of injuries and makeshift defensive combinations led to a number of embarrassing blowouts against Gold Coast (16-42), Sydney (4-38), Wests Tigers (18-36), North Queensland (20-36), Parramatta (4-40) and Melbourne (4-48).

Finishing with a -143 points differential after 25 home-and-away rounds, the side claimed the infamy of legitimately qualifying for the top eight with the worst for-and-against differential of any side in the NRL era.

Boasting one of the most formidable packs in the league, bolstered by the arrival of representative enforcer Tyson Frizell, the growth of Jacob Saifiti made rival teams stand up and take notice.

With his twin brother, Daniel, growing in stature as co-captain of the club, Jacob took the sibling rivalry in his stride and forced former test prop David Klemmer from the starting side off the strength of his performances.

Earning top honours at Newcastle's end of season awards night, the Fijian front-rower has been touted as a contender to join his brother in a sky blue jersey in the coming years.

Starting the year in first grade through necessity - the 23-year-old failed to get on the field on more than one occasions over the opening rounds - Jones enjoyed a breakthrough night against Cronulla when thrust into the backline due to injury.

Growing in confidence and gaining more minutes throughout the year, Jones is tipped to push for a starting position after inking a two-year extension prior to New South Wales going into lockdown.

Blooding several debutants who progressed through the club's junior ranks, the most striking new face for the Knights came in the form of teenage Englishman Dominic Young.

Travelling from the other side of the world after impressing recruitment scout Alex McKinnon from afar, the raw outside back defied expectations with four tries in six appearances after beginning the year as a long-term prospect.

Others to gain a taste of first grade included Brayden Musgrove, a winger who twelve months earlier played with Cessnock in the local league; Simi Sasagi, a utility from New Zealand; Matt Croker, a part-time front-rower called up from reserve grade during Origin; and Jirah Momoisea, a forward who reached the NRL nearly seven months to the day after rupturing his Achilles at training.

Having reached the finals in back-to-back seasons for the first time in 18 years, the Knights will have their sights set firmly on further improvement in 2022.

Strengthening the backline with representative star Dane Gagai returning to the club, the defection of Connor Watson to the Roosters will see Kurt Mann take on the role of Mr Fix-It.

Bringing in Hayden Knowles as Head of Performance in a bid to reduce the number of injuries, a fit-and-firing Newcastle outfit will be aiming to move into the next tier of premiership contenders.