No surrender in plucky chooks

There were any number of opportunities for the Sydney Roosters to give up on 2021.

Battered by injury. Playing away from home. Dealt a seemingly raw deal by officials on and off the field.

For most teams, any one of the challenges faced by the foundation club would have proved catastrophic.

Not so for a side coached by Trent Robinson.

Since taking the top job at Eastern Suburbs in 2013, the Roosters have won three premierships, four minor premierships and missed the finals once.

All things considered, 2021 was Robinson's finest hour under the circumstances.

Left to contend with additional short-term injuries and suspensions to boot, it was an achievement in-and-of itself to simply reach the finals, let alone be equal with the fourth-placed Sea Eagles on premiership points.

At the core of the side's unflappable resilience were James Tedesco, stepping into the role of captaincy with distinction, and Jared Waerea-Hargreaves, who became only the fifth man to play 250 first grade games for the club.

Finishing the year in fifth position before holding on for a one-point victory over the Titans during a thrilling Elimination Final in Townsville, the dream run came to a close a week later at the hands of the Sea Eagles in Mackay.

The Roosters will head into next season minus more than 1,200 games of first grade experience.

Having weathered the challenges of 2021, Robinson should find rejuvenating a quality roster to be a pleasant change of pace. 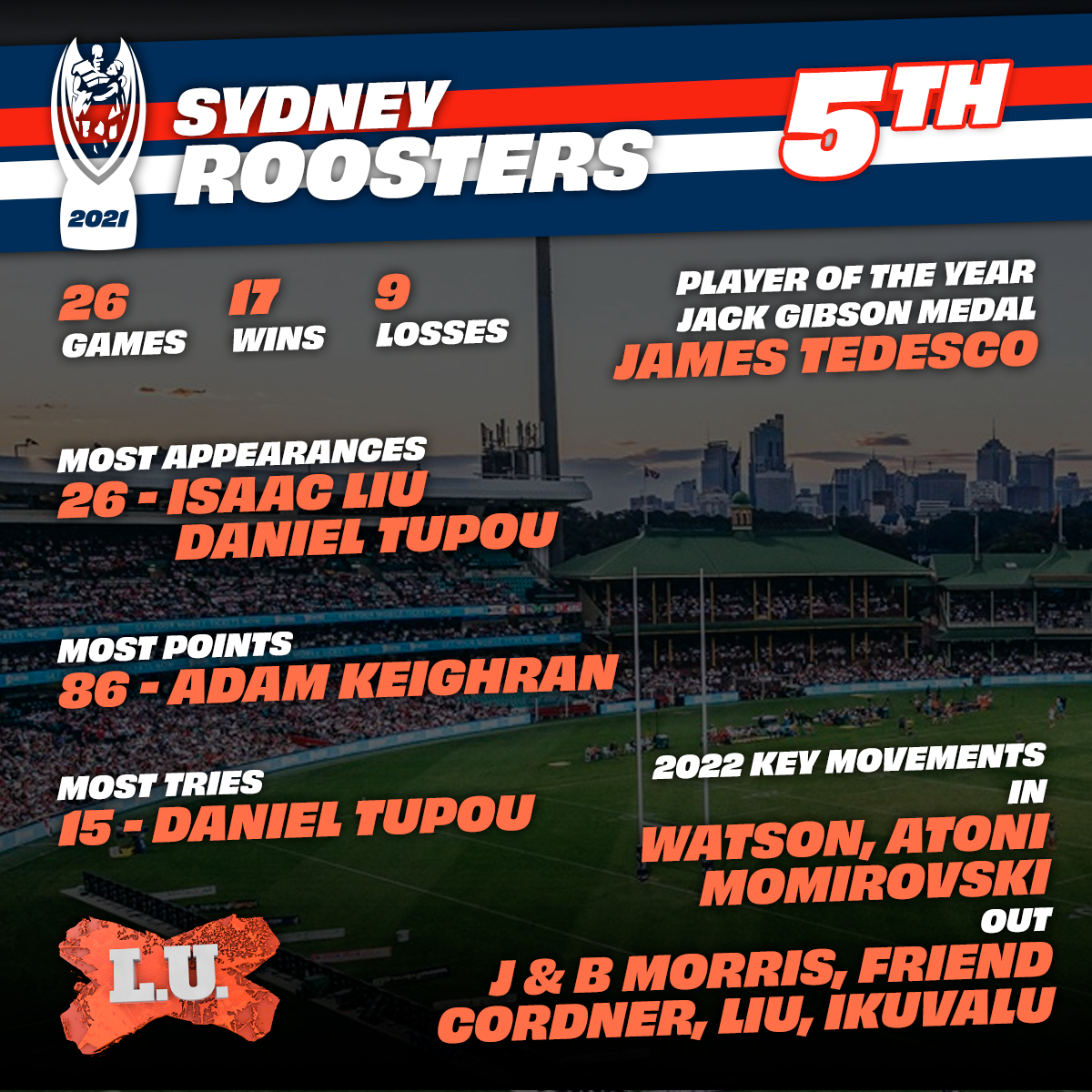 No moment was as harrowing during the 2021 season than the screams of anguish from Brett Morris during the closing stages of the Round 8 visit to Newcastle.

Having lost representative front-rower Lindsay Collins to a season-ending knee injury only minutes earlier, the same injury sustained by Morris was all the more distressing as it quickly became apparent one of the all-time greats had played his final match in first grade.

With no interchanges to draw upon for the final three-and-a-half minutes, the Roosters continued to play aggressively with 11 men and were rewarded with Josh Morris touching down for a hat-trick to cap an emphatic performance.

In that moment the Roosters were aching for their wounded teammates, yet they refused to let adversity distract from the task of competing until the fulltime siren.

At no point in the season was there a moment where the Sydney Roosters looked anything other than top eight certainties.

For a team boasting some of the biggest names in the game, such a statement may seem less than impressive.

Whereas past successes could be attributed to the brilliance of individual stars, the defining trait of the Roosters' success in 2021 had less to do with star power, but rather a "next man up" mentality built around resilience.

Using 34 players in first grade, the most used by the club in a season since 2002, the Roosters remained one of the most consistent teams in the competition as a result of the traits instilled from the top down during Trent Robinson's tenure.

At the bleakest point during the injury crisis, part-timers Ben Thomas and Brad Abbey were thrown jerseys through necessity, while journeyman Dale Copley responded to a late season SOS following a severe shortage of outside backs.

Daniel Tupou and Isaac Liu were the only players to appear in every match, yet despite the lack of consistency in player personnel from week-to-week, the Roosters put up strong showings with few exceptions.

For as gallant as Trent Robinson's men were in the face of adversity, the absence of class and experience proved telling in clashes against premiership heavyweights.

Going down on multiple occasions against Penrith, South Sydney and Melbourne during the course of the home-and-away season, the side's sole win over a team that finished in the top four came during daylight saving against Manly.

Posting a club record opening round win which saw the Tricolours, led by Luke Keary, feast on the carcass of a Sea Eagles outfit missing Tom Trbojevic, the reversal of star power when the two teams faced off six months later saw the side bow out in the semi finals for the second year running.

James Tedesco and Jared Waerea-Hargreaves may have played a more vital role in keeping the Roosters' season afloat, but it was the strides taken by replacement playmaker Drew Hutchison that typified the side's ability to remain competitive under pressure.

Coming of age as a first-grader following stints with St George Illawarra, Leigh and North Sydney, the 26-year-old stood up in the absence of Luke Keary to provide a steadying influence in the halves, which complemented the youthful exuberance of Sam Walker and Lachlan Lam.

Sustaining a serious injury against Parramatta in May, resulting in fractured ribs and a punctured lung, Hutchison returned just as the delta variant was spreading throughout Sydney to finish 2021 as one of the game's most-improved players while earning a new two-year deal to boot.

Few players have attracted as much hype before debuting in first grade as Joseph Suaalii.

Caught at the centre of an irresponsible media frenzy during the pre-season, the 17-year-old outside back, signed from archrivals South Sydney, was at the centre of a decision that made a mockery of the game's eligibility rules by being granted an exemption to debut in first grade before the age of 18.

While the Roosters handled Suaalii's introduction to first grade with a grace of responsibility and perspective - notably lacking from the league's decision to live-stream a reserve grade trial marketed as his first match against men - it was another teenager on the club's books who finished as the Dally M Rookie of the Year.

Demonstrating confidence well beyond the standing of a 19-year-old, Sam Walker made an instant impression with multiple match-clinching field goals and winning the coveted Spirit of ANZAC Medal in only his fourth top grade appearance.

At their best, the Roosters have an elite tier squad, littered with rising stars, capable of competing for the premiership.

Trent Robinson did an inspired job in 2021 with an injury toll rarely seen in the NRL, but with so much experience departing the club, it's unsustainable to think the side can get the same results without reinvention.

The signing of Connor Watson could prove vital in the club's bid to remain a competitive force, while Joseph Suaalii, being of a legitimately eligible age to play in the NRL, should be better prepared for the rigours of first grade.