There is an old adage in the sport of rugby league, which declares that winning starts with the front office.

Brad Arthur entered his eighth consecutive year of genuine First Grade rugby league head coaching in 2021, and to say that the man had endured a challenging reign at this club would be an understatement - a salary cap scandal, a Wooden Spoon, the departure (and eventual return) of Jarryd Hayne, and the doping drama surrounding Michael Jennings were all instances where the man at the helm of arguably rugby league's most poisoned chalice called upon his legendary namesake to demonstrate genuine leadership qualities, in an attempt to guide the club through some of its most dire circumstances, and come through unscathed at the other side.

But can long-term stability lead to genuine evolution, or can its just as readily lead to plateauing?

The Eels began 2021 with a bang, winning their first 4 games of the season - including a memorable defeat of bitter rivals, and 2020 Premiers, the Melbourne Storm - by a combined scoreline of 104 to 54.

Arthur relied on a simple gameplan - use his big, mobile, powerful pack of forwards to dominate the middle, and give space to his halves to create.

After a hiccup against the Dragons, the Eels would win their next 5 consecutive games, before succumbing in consecutive losses to the Sea Eagles, and Rabbitohs.

Three consecutive wins against lower-placed teams, a 1-point loss to Penrith in Round 16, and a bye, lead to a period where the Eels slumped to 4 losses from their next 5 games, before stringing back-to-back victories against the Cowboys, and Storm.

Round 25 saw an inexperienced Eels side get belted by a full strength Panthers side, but the ladder made for decent reading - a 6th place finish, 15 wins, 9 losses, 566 points scored, and 457 points against (the 4th best defence in the NRL).

The Eels never got out of second gear in Week 1 of the Finals, in defeating Newcastle 28-20, before bowing out of the 2021 season to eventual Premiers Penrith, in a controversial game, which is also one of the greatest games of the modern era. 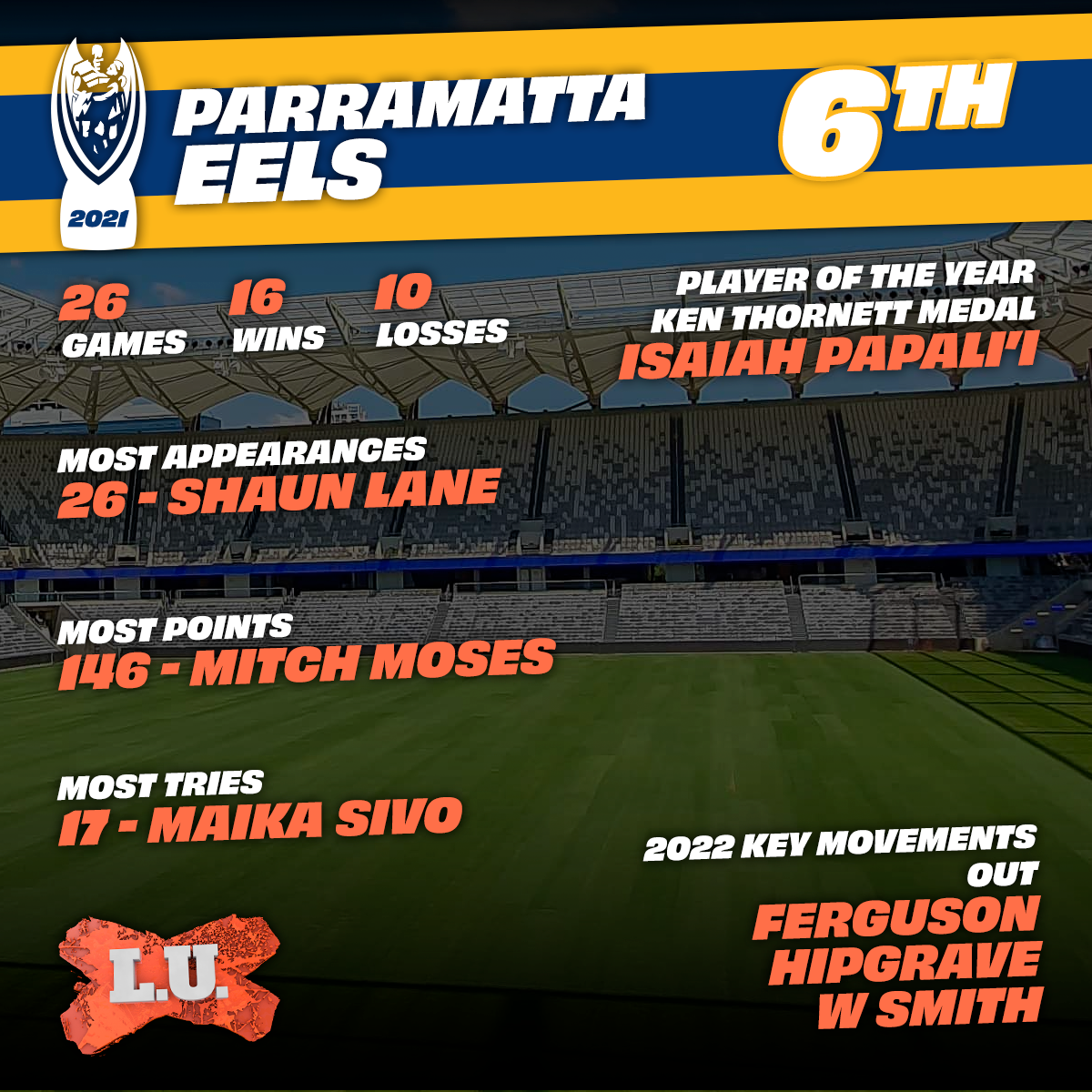 The Eels lost form in the latter stages of the season, losing four consecutive games to the Raiders, Rooster, Rabbitohs, and Sea Eagles - but it was not the losses that raised severe doubts as to where this team was heading, but the scorelines.

The Eels lost these games by a combined margin of 136 to 32; the Eels's hitherto stout defence had been exposed - badly -, and a team that had been sitting comfortably inside the top 4 all season long began to slide down the ladder.

The Eels then played the struggling Cowboys, and found their mojo in time to defeat the Storm in round 24.

Heading into the Finals, the Eels had lost 5 of their last 8. Clearly, this side needed something to change - and it did.

Of course, the bad turning point was losing Reed Mahoney, and his deputy, Joey Lussick, heading into the Finals; Parramatta entered the 2021 season with no recognised hooker, due to injuries to Mahoney, Lussick, and Nathaniel Roache.

Parramatta employed a simple gameplan - dominate the ruck with a set of powerful forwards.

Parramatta finished the season in equal second place for possession counts in all games, on 51%, behind only the Storm, and they finished equal first for completion percentage at 80%.

Parramatta's powerful, mobile pack helped the Eels finish third in the NRL for all run metres, with 45,553m, and third for post-contact metres with 15,192m.

Aside from Parramatta's overly-compressed ruck defence (usually leading to defensive deficiencies out wide), the Eels ended fourth in the NRL for negative play (tallying 295 negative plays), and were the fourth least secure team in the NRL - dropping the ball 244 times.

Parramatta were generally able to steamroll their opponents through the middle, but were then often impatient, and ill-disciplined, and this usually resulted in a high-risk pass being thrown, or a low percentage offload being forced.

Turning over possession so often is rarely a good idea - it is a worse idea when your team employs a well-known, and easily-countered compressed ruck defence techniques.

Opposition teams would pounce on Parramatta's errors, spin the ball wide, and watch as Parramatta's huge, powerful, less agile, and slower, outside backs struggled to contain the play.

Isaiah Papali'I performed at a truly elite level in 2021.

The words "superhuman" and "insane" come to mind - and the sky is the limit for the soft-spoken young man.

The most enticing prospect for the Eels to debut in 2021 was Will Penisini.

After the debacle that transpired with the career of Michael Jennings, Parramatta were desperate to find a centre of quality to replace him.

Tom Opacic did a solid job centre, and many more educated analysts of the sport suggested that Opacic should be the player to partner Waqa Blake in the centres moving forward.

Brad Arthur had other ideas, handing Will Penisini his First Grade debut in 2021 - and Penisini took the opportunity with both hands, and demonstrated why he was such a sought after junior player.

The right centre spot is Penisini's to lose.

The Parramatta Eels - once proudly known as a club that would develop young players - is seemingly back.

Parramatta performed at a reasonable level throughout their 2021 campaign, and there were certainly no players that could be described as disappointing.

However, the apparent stall of Dylan Brown's development has many analysts questioning where his future lies in the game of rugby league.

While not performing at a poor standard by any stretch of the imagination, Brown was not as instrumental to Parramatta's attack as one would hope of for a 5/8 - he had 2 try assists, 2 line break assists, 4 forced drop outs, 4 tries, and 98 metres per game, from 21 games.

Brown is still arguably the finest defensive half in the NRL, tackling at an efficiency rate of over 95% - but Brown's playmaking instincts are perhaps in need of some finetuning in the off-season.

The Eels head into 2022 with the same squad on the park as they featured throughout their 2021 campaign, which in terms of stability, and team cohesion, can only be construed as a positive indicator of their chances for 2022.

Parramatta's greatest barrier to overcome will likely be their mental preparation for big matches - while they did show that they could be up for big games in 2021, they were also at times guilty of playing robotic, rigid football, and were at times defeated by their opposition who simply out-enthused them.

They will feature the same spine as 2021 - all a year older, wiser, and more experienced. Mitchell Moses also got a taste of Origin football, so it remains to be seen what sort of impact that may have on his game for 2022.

The Eels will feature the same physical, aggressive, and mobile forward pack that won the ruck more often than not in 2021.

The Eels' biggest weakness most likely lies in their outside backs; while Waqa Blake has plenty of speed, and Haze Dunster is no slouch, neither Opacic, nor Sivo, are speed demons.

Add to that Penisini's inexperience, and the fact that Sivo will miss a large chunk of 2022 due to injury, and question marks surrounding how the Eels will fare in 2022 suddenly become boisterous.

A top 6 finish should be par for the course - but if they can string everything together, a top 4 finish is not out of the question.

The unfortunate medical retirement of Keegan Hipgrave - only 24 years of age - due to ongoing concussion concerns is a loss for the on-field aspect of the club, but it does open the door for another hungry player to leapfrog Hipgrave in the pecking order.

Marata Niukore is moving on after 2022, signing a mega deal to return home to the Warriors, and his aggression, and power, will be difficult to replace.