Four seasons in one season: Manly wilt before Turbo-charged flourish

In the countdown to round 1 Des Hasler hoped the unusual news was nothing more than pulp fiction, but in the end, midnight vision of Tom Trbojevic fumbling for top gear along The Corso in Manly proved to be his worst nightmare.

While every story has two sides, for Manly a torn hamstring was the only one that mattered, and with the sorry fullback on ice, a maiden wooden spoon firmed as they lurched from pedestrian to horrendous in a winless opening four rounds.

But come September, the only thing more remarkable than the Sea Eagles' demise was their miraculous charge up the charts like a Queen classic.

With his teammates rallying behind him, Turbo returned with the invincibility of Superman. Virtually untouchable, his mere presence gave old heads like the returning Kieran Foran and skipper Daly Cherry-Evans the structure to unleash a posse of try-hungry speedsters who by year end had inked their own names into the record books.

Averaging a fraction over 8 points per game and 39 against in the opening month, the Sea Eagles earned plenty of admirers with a spectacular climb off the canvas to finish in fourth place. A 42-6 thrashing of the Roosters in Mackay booked a preliminary final but it was South Sydney who ultimately found their measure. The eventual runner-up thwarted the Sea Eagles' dream just one game shy of the club's third grand final appearance since 2011.

Including three finals matches, the Manly rebound delivered 17 wins from 23 starts at a jaw-dropping 34 points per match. Manly fans weren't the only ones back on board, by mid-season the Sea Eagles had become compulsive viewing in a streak that saw them surge through the 50-point barrier in three consecutive weeks from rounds 14 to 16.

In a year where premiership legends Fred Jones and Bob Fulton passed away, it was at Parramatta where Hasler's outfit announced their premiership credentials. Following news of Bozo's passing on the morning of their round 11 encounter, a resolute Manly spurred by an emotional pre-game tribute to the Immortal went on to upset the more fancied Eels 28-6 before almost 25,000 fans.

Yet for all the cricket scores, mostly tallied against the competition's battlers, it was the front runners who consistently put the Sea Eagles back in their box. Eventual premiers the Panthers, Melbourne and the Rabbitohs each toppled Manly twice. Each defeat was a lesson in resolute defense, the type that needs to be heeded for the Sea Eagles to become a genuine 2022 contender. 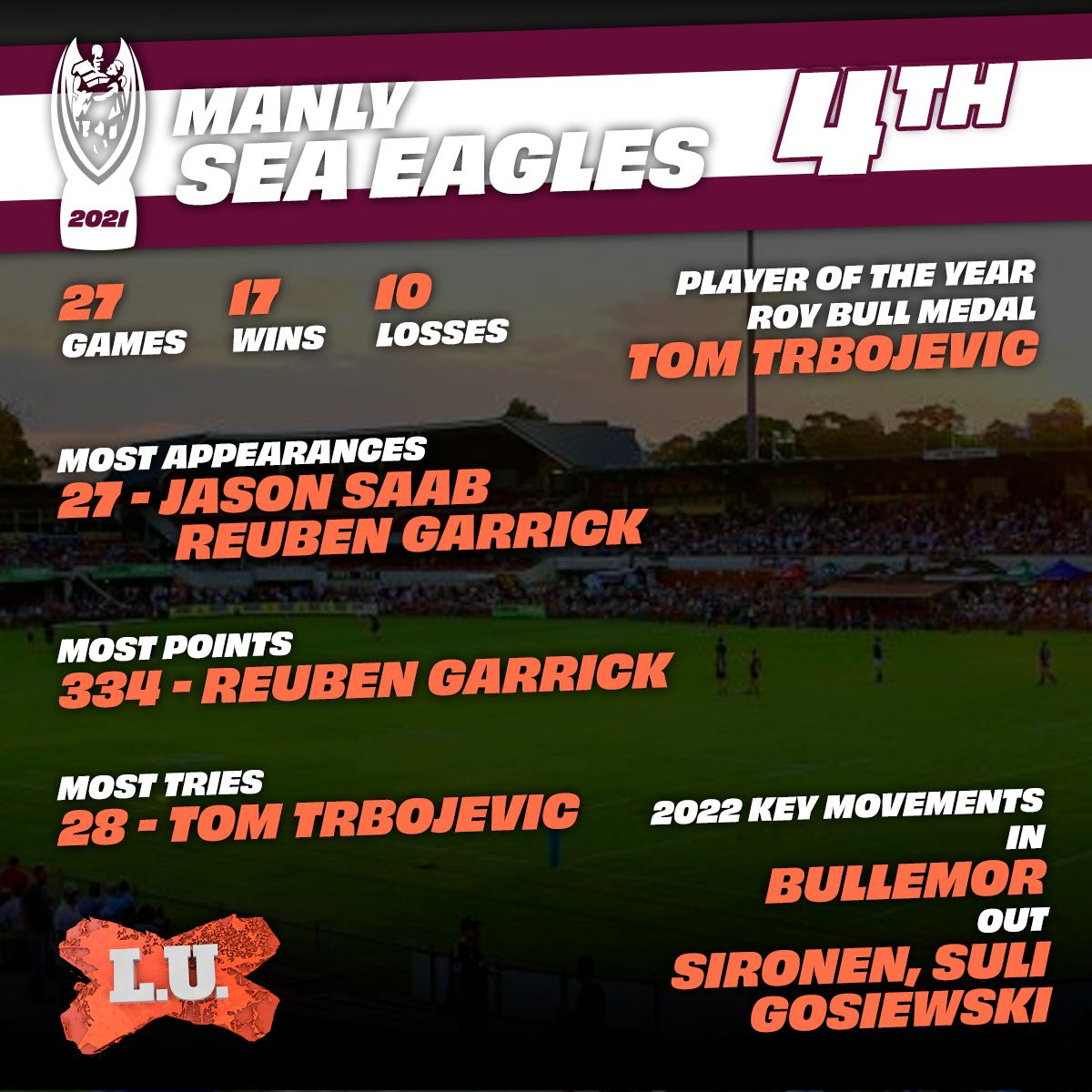 A healthy dose of Mudgee fresh air in combination with the return of Tom Trbojevic proved the perfect formula for the northern beaches boys to finally click into gear. The round 5 rout, a 36-0 hiding of the Titans proved an emphatic demolition few saw coming.

While the Gold Coast had no answers, the Sea Eagles' fortunes had actually turned a week earlier on the Central Coast. An ugly last-minute Cherry-Evans drop-goal, the 22nd of his career, proved enough to sink the Warriors 13-12.

And in the absence of their star fullback, the shot of confidence proved to be a crucial steppingstone in the path to Manly's entertaining revival.

The Titans once again felt Manly's wrath at Robina in round 15. In one of the more remarkable victories in the club's history, the Sea Eagles reeled in a 24-8 halftime deficit on the way to posting 48 unanswered points in a 56-24 win. It was one of five 50+ Manly scores in a season where the records tumbled.

The most significant included:

Concerns over the offseason departures of Addin Fonau-Blake and Joel Thompson faded quickly with the upfront grunt of Tigers recruit Josh Aloiai and breakout seasons from young back-rowers Haumole Olakau'atu and Josh Schuster.

Lachlan Croker's initial selection at hooker caused plenty of debate, but by season's end the former playmaker's efficient service and reliable defence made him an automatic selection.

Dylan Walker too, had arguably his best season in the maroon and white. A new roving role off the bench alongside his powerful mid-field charges proved a welcome layer to Hasler's expanding attacking arsenal.

Comprehensive finals losses to Melbourne and South Sydney proved Manly are far from the finished product.

With or without their mercurial No.1, they can keep the scoreboard ticking over but an inability to consistently defend their own errors places them a rung below the premiership's elite.

In the regular season Tom Trbojevic only laced up on 15 occasions, yet it proved enough to top the Dally M Medal count in one of the most dominant individual seasons of the NRL era. The first Sea Eagle to win the award since Matt Orford in 2008, Turbo joined Cliff Lyons (1990, 1994) as the club's third recipient.

Desperate for redemption, an embarrassed Trbojevic made up for lost time scoring a hat-trick of tries on five occasions, and his four-pointer in the preliminary final took him past Phil Blake's club record of 27 from 1983.

But the trailblazing wasn't confined just to the NRL. Four tries including a hat-trick proved crucial in the Blues' State of Origin triumph and he ended up winning the Wally Lewis Medal as player of the series, all from the less familiar position of centre.

And in some touching moments, the Mona Vale junior celebrated his 100th outing in Manly's top grade with a try double on home turf in the round 9 win over the Warriors. Then in the final round in Townsville, he finished off Reuben Garrick's length of the field lead-up to score what would later be declared the try of the season.

And special mention to St George Illawarra reject, Jason Saab. After minimal opportunities at the Dragons the long striding winger shot to prominence as arguably the game's fastest player. Finishing his rookie Manly season with 26 tries, the 20-year-old was equally adept at top speed or leaping over opponents to land with four points.

And with the bulk of last season's top 17 still on the books, no major additions are expected before the opening round.

Their departures along with fringe players Jack Gosiewski (Dragons), Tevita Funa (Waratahs rugby union) and Zac Saddler show the depth and potential the Sea Eagles possess. And after gate crashing the top-four in 2021, anything less than a preliminary final from the side out of a revamped 4 Pines Park would surprise many.