At the end of 2021, Storm players and fans alike would look back on the year as a premiership that probably got away. The team equalled the all-time record for consecutive wins (19), however were blown away by a resurgent Parramatta when looking to set a new record. This game aside, there weren't too many disappointments through the regular season after a 1-3 start.

Despite losing Ryan Papenhuyzen in the early stages of Magic Round and not seeing the best of him until the last rounds of the season the Storm managed to set a club record of 21 wins for the regular season and notched up another record in scoring 815 points.

Despite all this dominance, a gritty premier-in-waiting in Penrith halted the charge of the Storm in the preliminary final, with the game being perhaps the best example of the Storm missing the know-how of retired hooker and captain Cameron Smith. His namesake and replacement Brandon was lost to an early HIA followed by the Storm's most consistent forward in 2021, Christian Welch. From here the arm wrestle was a bridge too far, and the Storm bowed out on the back of a whopping 15 errors in the penultimate game of the season.

Whilst this year may be the one that got away it could also be the one that keeps the fires burning - the pain of being so close yet so far from going back-to-back will definitely help push players to find a new level of performance in 2022. 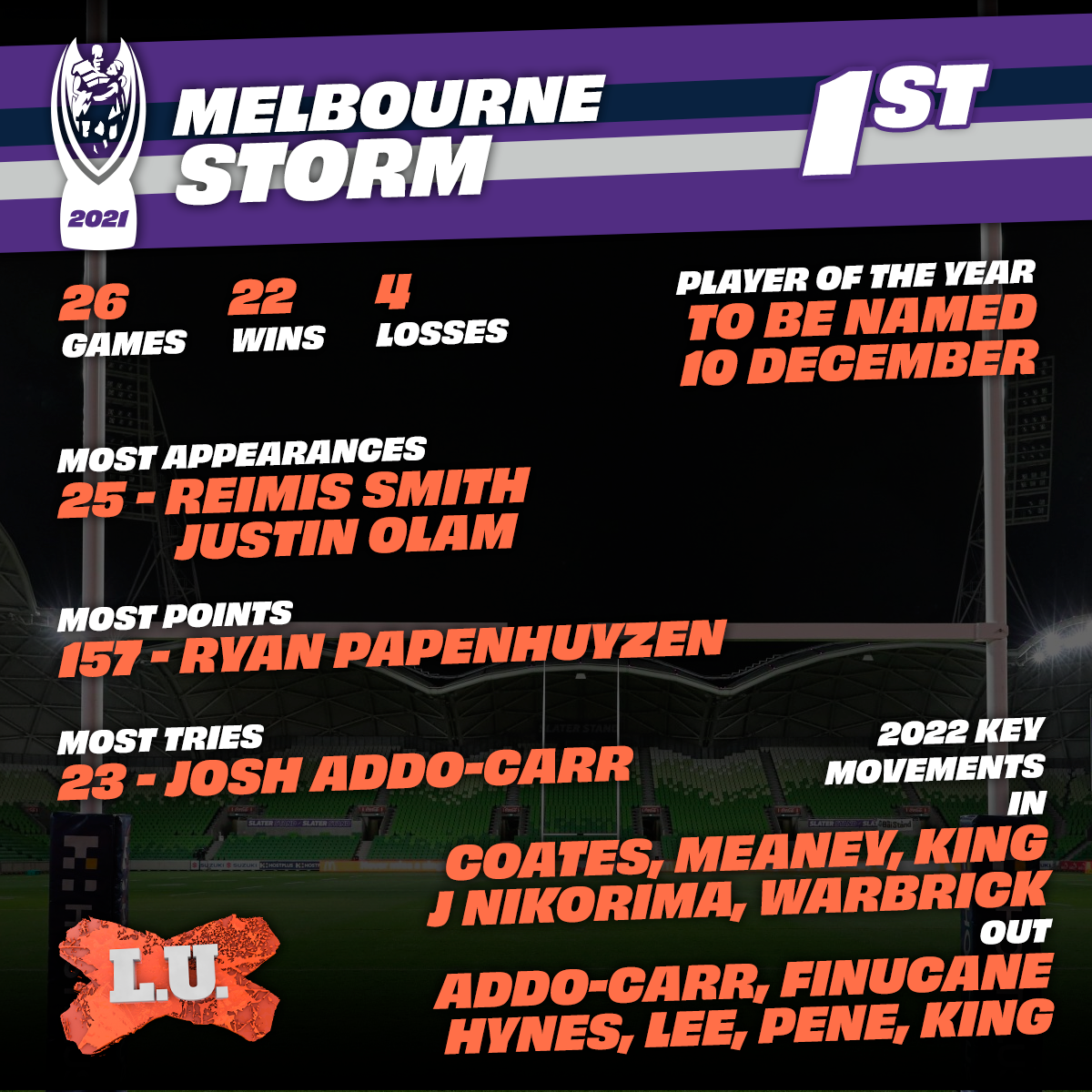 As odd as it may sound, the turning point was the return of star fullback Ryan Papenhuyzen. After starting the year in electric form Papenhuyzen was felled by a high shot in Magic Round that saw him taken from the field in on a medicab. The weeks that followed saw Papenhuyzen deal with long-lingering effects of concussion such as mood swings, headaches and dizziness.

During this time, Papenhuyzen's deputy - Cronulla-bound Nicho Hynes was elevated to the starting line up, and was arguably the form player of the competition for 8-10 weeks as the Storm continued their winning ways without their regular fullback's electric pace.

Upon Papenhuyzen's return, Hynes saw a drop in game time as the coaching staff slowly eased Papenhuyzen back into action via the bench - eventually promoting him to the starting lineup. Unfortunately for the Storm this disruption to the cohesion of the spine saw the once-slick attack start to stutter. Despite 'Paps' rediscovering his best form in the last two weeks of the season, the juggernaut had been disrupted enough to make the Storm vulnerable. This vulnerability coupled with the loss of two key forwards to HIAs in the that fateful prelim, ultimately put pay to the premiership aspirations of the collective group.

In short, basically everything. Only able to play five games at their Melbourne home ground of AAMI Park, the Storm were relocated to Queensland for the second straight season, and despite suffering the loss of their star fullback, hardly missed a beat all season. In attack, they scored more than 40 points on a whopping 11 occasions, and kept their opponents to single figures five times - including keeping an opponent scoreless twice.

The disruption of Origin was barely felt as key players in Hynes, Brandon Smith and Jahrome Hughes stepped up to lead the team around the park brilliantly. The emergence of Reimis Smith at right centre as well as the ongoing development in the game of Justin Olam meant the Storm had plenty of strike out wide to capitalise on the good work of the makeshift spine.

Tinkering with a winning formula is always fraught with danger, in this case the disruption to the momentum and continuity the Storm had meant that at the pointy end of the season the attack brilliance was diminished. Throw in the ill-timed HIA's in the preliminary final and it was curtains for the Melbourne club.

Aside from the end of season fade-out, there was a bit of vulnerability down the right hand side for the Storm. The new edge combination of Reimis and George Jennings at times looked a little lost and was exploited by several teams - importantly in the preliminary final both of Penrith's tries came down that side of the field.

Lastly - the combination of Brandon Smith and Harry Grant probably didn't quite deliver to expectation. Post- the retirement of Cameron Smith, the Storm look well placed to cover his play with the dynamic run game of Brandon Smith coupled with the craft & guile of Harry Grant. Whilst there were glimpses of this playing out as expected there was a noticeable lack of nous in key moments during the closer games. Whilst the two players will be better for this experience it turns out that replacing the greatest player of all time isn't as easy as putting 2 star players in his place.

At various times the Storm had a player that could lay claim to being the most in form player in the competition. Ryan Papenhuyzen scored 8 tries in the first 6 games including including a first half quadruple against the Broncos at AAMI Park. Through Rounds 7-10, Josh Addo-Carr scored an incredible 12 tries - including a ridiculous six-try haul in a 50-0 hiding of South Sydney. From here, it was the Hynes and Hughes shows, with both players taking turns at leading the side to huge victories throughout the 19-game streak.

From a forward standpoint, we saw Brandon Smith recieve a 'letter of termination' from the front rowers union as he scored tries for fun during a purple patch of form. As well as scoring tries, Smith was setting them up and hitting hard in defence as he got an extended stint at hooker whilst Harry Grant battled injuries. Also standing up in the forwards was the beloved Christian Welch, the 'dugong' being a pillar of excellence in the front row, consistently outputting over 100m in attack whilst also contributing with offloads and high work rate in defence.

The Storm were a little thin on the ground in terms of rookies in 2021. Five players made their NRL debut, including local Melbourne product Dean Ieremia on the wing. Ieremia ended up playing 10 games for the Storm scoring 6 tries, and whilst not an earth-shaking debut season he showed more than enough to suggest that he could become a regular in the NRL.

After Ieremia, Trent Loiero played the second-most games of all the Storm rookies with six. During these games Loiero showed a strong running game which saw him score 2 tries on the other side of the ball Trent was a willing worker in defence.

Despite the dominance of 2021, looking forward it appears 2022 could be a somewhat turbulent year for the Storm. Several key players have moved on, most notably co-captain Dale Finucane and star outside backs in Josh Addo-Carr and Nicho Hynes. Whilst there have been additions to the squad to replace these players, it's hard to replace the years of experience in the Storm system and structure that these players had.

Many thought the biggest test Bellamy and the Storm would face was going to be when none of the 'big three' of Billy Slater, Cooper Cronk and Cameron Smith remained, but I think 2022 presents an even greater challenge. Coming off a year which saw the team promise so much but ultimately fall agonisingly short of a shot at the major prize coupled with the exit of a couple of club stalwarts the Storm face arguably a bigger transition year than they did at the start of 2021.

In saying all of this, whilstever the coaching box contains Craig Bellamy it's hard to imagine that the Storm will be too far from their next premiership.