The 2021 season will forever feel like a missed opportunity for the South Sydney Rabbitohs.

A chance to bring an end to one era, led by halfback Adam Reynolds, without having to worry about what the next may look like.

The Rabbitohs almost did just that, making their first grand final since 2014 but falling just short in a 14-12 defeat to the Penrith Panthers.

Reynolds is far from the only high-profile casualty ahead of 2022, with coach Wayne Bennett also bidding farewell while Dane Gagai and Jayd'n Su'A have also left.

Bunnies fans can take some confidence in the fact new head coach Jason Demetriou had been working under Bennett for a number of years. If there is anyone that understands Bennett's vision for the club it is Demetriou.

There is still no doubting the supercoach's absence will be felt, as will that of halfback Reynolds. Cody Walker will be forced to shoulder more responsibility with either Blake Taaffe or Lachlan Ilias likely to partner the five-eighth in the halves next year.

There is Anthony Milford too, who is facing court over assault charges, only casting more uncertainty over the halves picture.

Fortunately, Latrell Mitchell and Damien Cook will round out what it otherwise a relatively stable core to build around in the hope another title chance is not too far away. 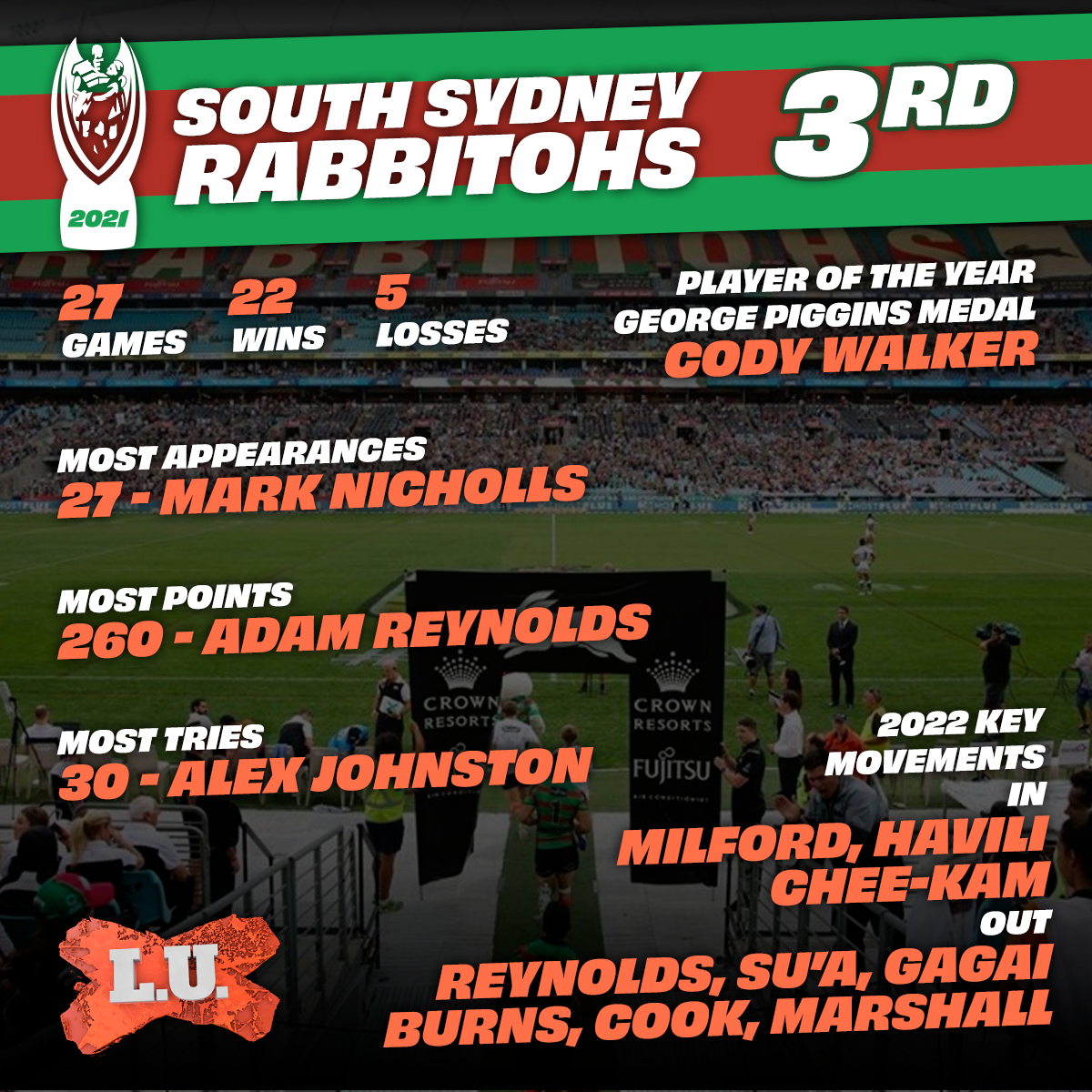 Funnily enough, it was South Sydney's 56-12 loss to eventual premiers Penrith that ended up sparking a mid-season resurgence for Bennett's men.

The 44-point drubbing had most pundits questioning whether the Rabbitohs were any hope of competing for the premiership. Sure, they could score points but they could leak them quite easily too. After that defeat, Bennett had no words for the Rabbitohs players and instead demanded they quickly pack up their things before leaving without any other words.

What followed was a coaching masterclass as Bennett guided the Bunnies towards the top of the ladder. South Sydney went on a winning run, averaging nearly 40 points per game and conceding just 16 until the finals. By week one of the finals the Rabbitohs were smarting and won the battle up front to shock the Panthers 16-10.

The left edge quickly established itself as one of the most exciting in the competition.

While there were doubts over Mitchell's fitness at the back, his ball-playing helped free up Walker to keep the opposition defence guessing.

When you add in his running game it became increasingly tough to shut down Mitchell, with long-range kicking key to tiring him out and diminishing his impact.

Shutting down Mitchell though only went so far, with Walker also enjoying a career-best campaign (37 try assists and 58 linebreak assists).

It is honestly had to pinpoint as South Sydney did finish the season on such a high note, even if it did not end with a premiership.

The attack was varied, the forward pack performed above expectations and even the defence improved as the season went on.

Perhaps it was the defence, and in particular the decision-making on the edges, that let South Sydney down at times.

Even wins over the lowly Dragons, Bulldogs and Warriors saw Souths leak a concerning amount of points.

That is not as much of an issue when the Bunnies were racking up 40-plus points themselves but it was not a formula for success against the best teams in the league.

Defence is often a reflection of attitude and Reynolds set that for South Sydney with his professionalism.

Cameron Murray looms at the most capable option to fill the leadership void and along with Mitchell's voice at the back will be key in setting the defensive line.

With Walker and Mitchell already rating a strong mention, it is worth putting the spotlight on a few other talented players who don't always get the same attention.

Away from that dangerous left edge, Campbell Graham quickly established himself as one of the league's most-improved centres.

While a consistent finisher, it was Graham's work in defence in particular that made him an asset and had the 22-year-old floated as an Origin bolter.

Speaking of Origin bolters, Keaon Koloamatangi also enjoyed a breakout season on the edge, averaging over 120 metres per game.

Koloamatangi was rewarded for his strong form with a new contract in October and has plenty of room to grow having only debuted last year.

Meanwhile, up front it was Tom Burgess who really stood tall in the absence of brother George.

Heading into this season there were question marks over where South Sydney's go-forward would come from but Burgess quickly embraced the added responsibility.

Averaging just under 140 metres, Burgess proved himself valuable both setting the tone early and providing impact off the bench.

When Latrell Mitchell was suspended and wiped out for the rest of the season, it saw most put a line through the Rabbitohs for 2021.

Nathan Cleary had been terrorising the league with his lethal kicking game and the young Blake Taaffe was an easy target for the superstar halfback.

Taaffe though, save for a handful of errors, proved more than up to the task.

Crucially when the youngster did come up with a mistake, like he did in South Sydney's 16-10 win over Penrith, he didn't let it get to him.

Rather, Taaffe stood tall to show composure beyond his years while his crisp passing game made him the perfect replacement for Mitchell.

It even had some suggest the first-choice fullback move to the centres.

That won't be happening, at least for now, but Taaffe certainly will be a key part of South Sydney's future regardless of where he suits up.

Without Reynolds, it will be on Walker to be the calming influence early, at least until his new halves partner finds their feet.

That is not necessarily what Walker needs given he is at his best playing off-the-cuff and without too much pressure to organise the attack.

South Sydney's premiership hopes will likely hinge on how quickly it can develop the new-look halves combination.

At this point a title looks beyond the Rabbitohs in 2022, with next year instead shaping as a chance for Souths to work out its identity post-Reynolds and Bennett.