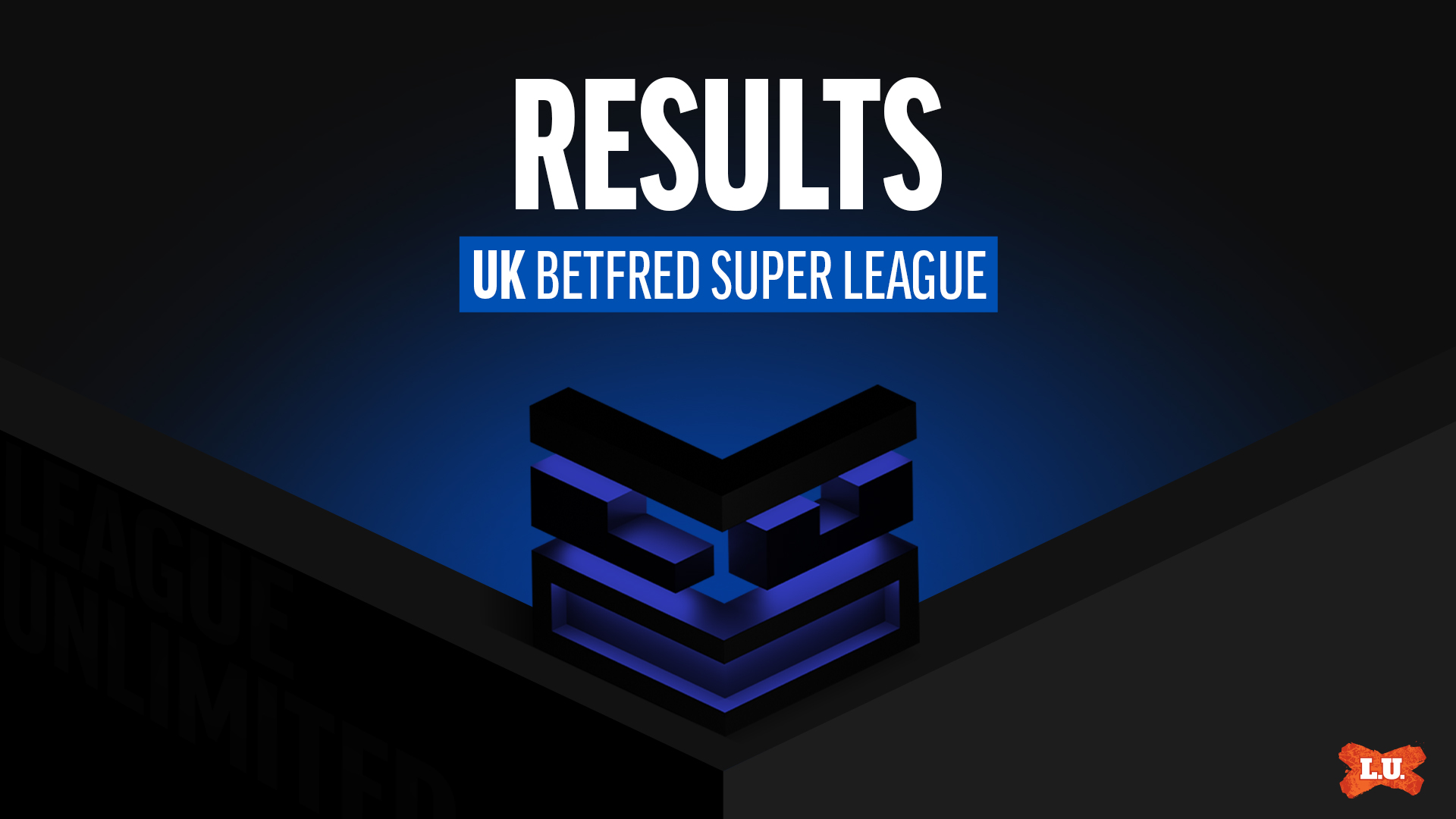 All the results and scorers from the 'Rivals Round'.

Catalans Dragons won the first all-French Super League derby 18-10 in a fiery encounter which saw Joe Chan sent off and two others binned.

Emotions were running high for the derby but Catalans were the first to settle and strode out to a 14-nil lead over their neighbours in a fine first half display.

Dragons winger Foud Yaha opened the scoring as he finished a wonderful break from the hosts which started from their own half to make it 4-0.

Both sides had chances but Catalans took their advantage to double digits through Joe Chan. The forward has made a habit of finding the whitewash before he was dimissed in the second half for a dangerous tackle.

Toulouse were reduced to twelve when Matthew Russell was binned for a tactical foul as they were defending their line. Yaha took advantage and completed his double, making it a one-sided affair for the hosts.

The visitors did get some joy just before the break when superbly named centre Guy Armitage crossed to bring the margin back down to 10 points in a breathless first half.

Matt Whitley restored Catalans 14-point advantage following another sin bin, this time to Toulouse interchange utility Eloi Pelissier which created the space for the back to score.

Toulouse took advantage of the 12-man Catalans defensive line following Chan's dismissal which opened up space for Matthew Russell to send Chris Hankinson over to give the visitors some hope.

Castleford Tigers kept up their points scoring prowess with a 34-4 win over Wakefield Trinity in Super League's Rivals Round.

Coming off their thumping win last week, Castleford Tigers picked up right where they left off with a five try performance and passed 30 points for the second straight week.

minute while hooker Kenny Edwards was the other Tiger to score in the first half.###>

A pivotal part of the Tigers mauling was the boot of Gareth O'Brien. The five-eighth kicked seven goals in the win which included three penalty goals.

Edwards made it a double in the 47###sup

minute as the away fans were delirious in delight which was only furthered when Paul McShane and try-scoring maestro Greg Eden both touched down.###>

Wakefield Trinity did find some late consolation through Mason Lino. The halfback dived over to score with ten minutes left in a night the home fans will want to forget quickly.

A dramatic comeback from Huddersfield Giants has helped them to a 20-all draw against Leeds Rhinos on Thursday night.

Leeds Rhinos will wonder how they let the extra point slip after the Rhinos led by double digits with under two minutes left on the clock after a impressive performance.

Jermaine McGilvary gave the visiting Giants a perfect start with his score within the first ten minutes before the Rhinos responded through five-eighth Liam Sutcliffe to lead 6-4.

Papua New Guinea international Rhyse Martin was the busiest man in Leeds tonight. The forward picked up a four-pointer alongside four goals which included penalty goals either side of half-time.

When interchange player Morgan Gannon crossed right on the hour mark, it looked like Leeds were going to take home the two points tonight, as the hosts led 20-10.

No one told that to Huddersfield Giants. Former Shark Ricky Leutele kept them in the contest with his score before the hour mark and set up the famous finale.

Trailing ten points with two minutes is a tough task but when lock Luke Yates crossed and Tui Lolohea's conversion put them within four points there was a chance.

Next, it was time for Innes Senior to become a hero. He was on the end of the manic final minute to level the game at 20-all. Lolohea's missed conversion meant the game was headed into the drama of Golden Point.

Neither side were able to find the required points to take home the extra point in Golden Point so Leeds and Huddersfield were forced to share the spoils in Super League's first draw of the year.

Wolves snap in their losing streak against Red Devils

Warrington Wolves broke their losing streak in fine form with a 32-18 win against Salford Red Devils on Thursday evening.

The Wolves were hungry for tries as the hosts scored in bunches with Toby King's hat-trick and Matthew Ashton double helped them to the victory.

Toby King was crowned the king of the Wolves with the opening two tries of the contest which put Warrington Wolves ahead by a dozen.

Next it was Matthew Ashton that helped extend the Wolves advantage to 16-nil at the break. The Wolves help was caused by the sin binning of Red Devils fullback Ryan Brierley on the half hour mark.

The fun continued for Warrington after the restart. Joe Philbin pushed the score line to 22-6 with his score then Ashton completed his double to confirm the Wolves win.

The Red Devils were left to score a pair of consolation tries through hooker Andy Ackers and returned fullback Brierley adding to Ken Sio's first half four-pointer.

There was icing on the victory cake for Warrington as King completed in his hat-trick in the final ten minutes of the contest. The Wolves finally got to sing the team song after a drought of several weeks and move forward.

Star signing Lachlan Coote delivered derby bragging rights for Hull KR in their 16-4 win against Hull FC on Easter Friday in Rival's Round.

A sold out crowd greeted the two halves of Hull as they entered Craven Park and the game was tight and absorbing in the first half as the two sides went into the break level at 4-all.

The two tries came in close proximity to each other either side of the half hour mark. Ryan Hall produced a wonderful finish in the corner for Hull KR while dynamo Josh Reynolds responded for Hull FC.

In the second half, it was the Lachlan Coote show. The former Saints and Panthers fullback scored a quickfire double in the 49###sup

and 54###sup minute to put the Robins advantage to a perfect dozen and earn them bragging rights.###>###>

The Easter Friday success breaks a streak of three straight losses for the Robins against their local neighbours and will feel sweet. It also builds on their strong win against Warrington Wolves last weekend.

St Helens continue their strong form over historic rivals Wigan Warriors in their 22-4 success to close out Super League's Rivals Round.

It was a fabulous end to another successful Rivals Round as a packed out Totally Wicked Stadium saw two of the most prolific clubs in Super League renew their hostilities.

Wigan were the first side to get across the stripe through Jai Field who has lit up Super League since his move from the NRL. The visitors held a 4-0 lead and looked to keep their hold at the top the table over them.

From there, the Saints machine roared into action. Tommy Makinson and Jonny Lomax scored tries before the break to give St Helens a 12-4 advantage headed into the break.

Joe Batchelor helped further the Saints advantage with his score after half-time which put them ahead by a dozen. It also meant they were on course to take the top spot on the Super League ladder.

That was confirmed when Marc Percival put the icing on the Saints winning cake fifteen minutes from time. The centre crossed for St Helens fourth try to the delight of the 17,980 fans crammed into the Totally Wicked stadium.