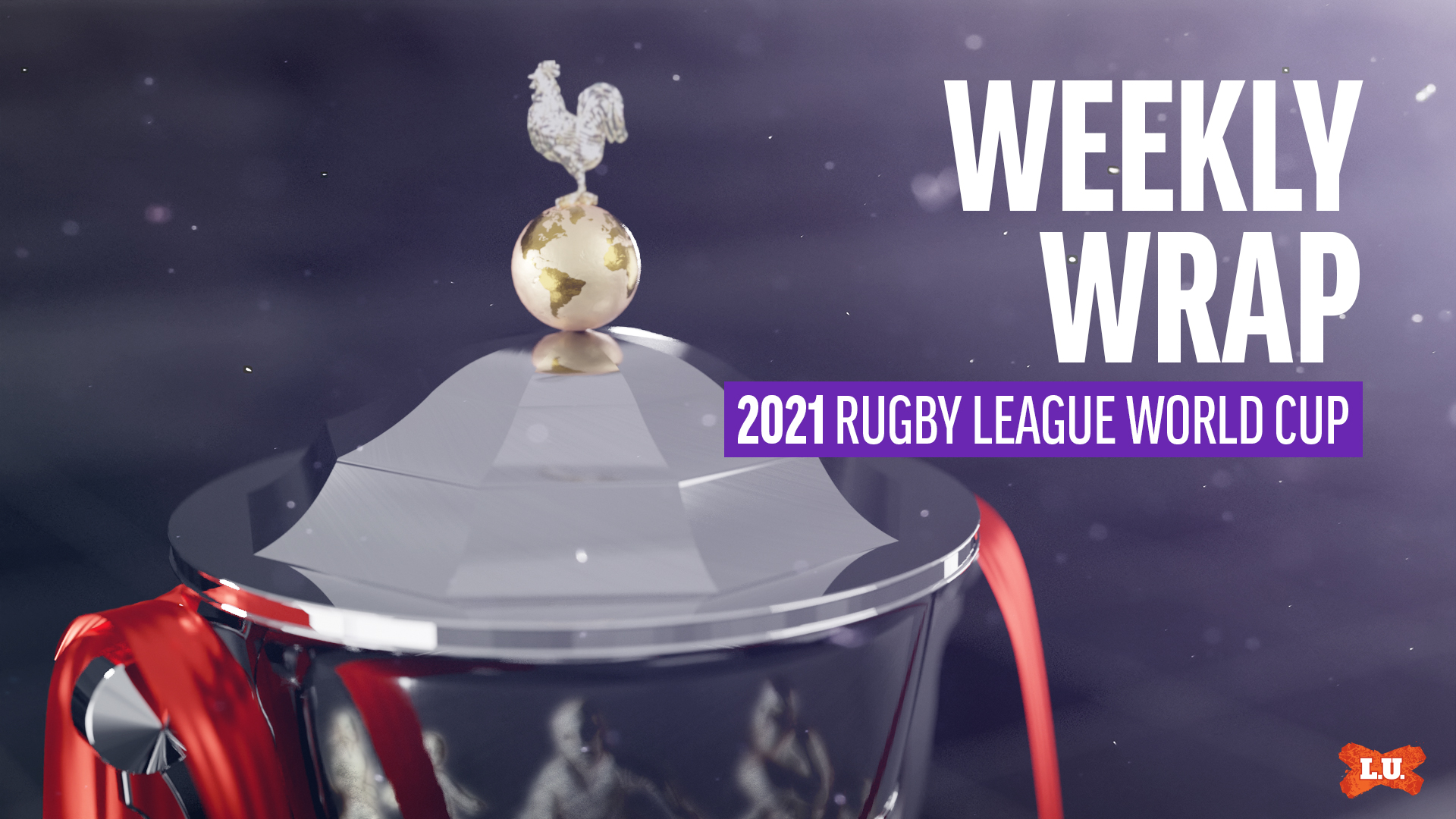 As the Semi Finals of the Men's Rugby League World Cup unfolds, here's your one-stop shop for results, reports, our Player of the Tournament standings, match review and more.

Australia are the first side through to the Rugby League World Cup final in their 16-14 win against New Zealand today in Leeds.

It was a brutal and bruising semi-final but Australia held their nerve with the only points of the second half to Rabbitohs backrower Cameron Murray to become the first side into the final and look for another title.

A clash between two of the top sides in International Rugby League didn't disappoint as both Australia and New Zealand left it all out on the pitch in Leeds in their semi-final clash and it showed in the final score.

New Zealand were the first side to get on the board.  A pinpoint kick which was taken by Joseph Manu who passed it to Jahrome Hughes to dive over and give the Kiwis the perfect start against the reigning champions.

Australia looked to their air themselves for their first four-pointer. Ben Hunt lofted a kick high for who else but Josh Addo-Carr to swoop on the ball and score his 12th try of the tournament and make it 6 all.

For much of the first half, New Zealand looked the side that were in control. They were offloading at will and causing Australia some headaches in defence. They inched ahead again from an offside penalty which saw Jordan Rapana pilot over the conversion for 8-6.

In a scrappy game, the tries were first class. Australia opted to run the ball through Nathan Cleary, he found Jack Wighton who shrugged off a tackle and found a wide open Valentine Holmes to give the Kangaroos their first lead of the game.

Fittingly, New Zealand took a slender 14-10 lead going into the break. They found space on the left side through Ronaldo Mulitalo who weighed up the options well and found Dylan Brown to dive over just before the break.

The second half was a much more taxing affair between the two forward packs. There was only six points scored in a half where the two sides just bashed into each other and left it all out there to make the final.

Those only points were scored by Australia. From a penalty restart, Cameron Murray spotted the New Zealand defence not set and charged over from close range then Cleary saluted from the tee to make it 16-14.

New Zealand had some chances late in the game including the final minutes. Rapana started the move with a huge run but an early kick for Peta Hiku was well guarded by Addo-Carr to deny them the score.

Australia held on and head to another World Cup final. They will face either England or Samoa in that game pending what happens in London on Saturday but the defending champions will need to tighten up their play to lift the trophy.

A Stephen Crichton field-goal in the first period of golden point has seen Samoa advance to their first World Cup final defeating England 27-26 in an all-time World Cup match at the Emirates Stadium.

This match had a lot riding on it for both sides. The winner advanced to a World Cup final date with Australia, whilst the loser was going to be packing their bags and leaving the tournament after a strong run-through this tournament.

It was a nervous start from Samoa sending the opening kick-off out on the full, but they were able to put this behind them with several strong defensive stands to hold England out. This proved decisive in the opening minutes and it led to Samoa crossing for the first try of the contest. Off the back of a set restart, Tim Lafai was able to get on the outside of Kallum Watkins as he beat his team-mate to cross for the first try.

Samoa's lead was threatened minutes later when Junior Paulo was sin-binned for a horrible spear tackle on opposition prop Tom Burgess. Replays suggested the Samoan skipper was lucky to avoid being sent from the field for the duration of the contest. The Pacific island powerhouses were able to hang on despite the lack of numbers although they did lose Fa'amanu Brown after he was knocked out in an awful collision and Oregon Kaufusi for an HIA in the same incident.

England thought they hit back with the extra man advantage, but Lafai again had the better of his opposite number Watkins when he denied the English centre what would've been the swift reply. But Samoa came out of the sin-bin period with the duck-egg they went in with.

However, some soft discipline from Samoa allowed England to camp down the other end. George Williams split the defence before giving up a suspect pass to Elliot Whitehead to give the English side a narrow 2-point lead. A poor grubber kick from Jack Welsby gave away a seven-tackle set which allowed Samoa to cross for their second try. A poor defensive read by the same edge as the first try allowed Ligi Sao to catch England asleep at the wheel and re-take the lead and go to half-time up 10-6.

Both sides had early chances, but only one took advantage and it was Samoa that was left at the alter bombing their scoring opportunity. A clever kick from Williams was initially defused by Lafai. But Watkins got one back on his team-mate jolting the ball free and John Bateman won the race to the ball which saw England take the lead back off the Samoans.

However, not to be outdone. Samoa crossed for the try of the tournament when Jarome Luai was able to step his way past before linking up with Paulo who got the speculator back to Luai who tipped it onto Stephen Crichton and crosses in the right corner. Samoa had a slender four point advantage with half an hour to play.

That lead was extended eight minutes later when poor disciplined combined with silly elementary errors gave Samoa another try. Lafai crossed for his second of the afternoon when he was able to get through the cover defence to push the margin out to eight. England would have all the possession for the next period of the match. After being denied by the video ref, Herbie Farnworth took matters into his own hands beating four Samoan defenders on his way to the line to reduce the gap to just two points.

With fifteen minutes to play, we had a grandstand finish looming to decide the final place in the final. But, a soft and controversial penalty for a late tackle on Sam Tomkins gave England a golden opportunity to tie the match up at 20-20. Tom Makinson was able to convert the chip shot. But, there were a few more twists and turns left to come in this game. England's best Victor Radley thought he had the numbers, but like many times before, Stephen Crichton picked off the pass to intercept the lead for Samoa. With minimal time remaining, Williams threw a dummy and ran before linking up with Farnworth and it was 26-26 with under a minute to go and sent the game to golden point.

In the period of golden point, both sides squandered early chances. Samoa had the first chance when Milford had a kick charged down. But, England was their own undoing when Tomkins threw a forward pass. From there, the boy from Apia, Stephen Crichton nailed it from 30 meters out to secure Samoa's place into their first World Cup final. Samoa have defied it all to make the final, with rumours of in-fighting, injuries and players being drafted in late, they deserve their place in the final and extracted revenge following a 54-point horror show on opening night. For England, it's nothing more than heart-breaking, their best chance to secure the World Cup on home turf and they left their chances at the altar.

For comprehensive historical statistics on the Rugby League World Cup, make sure you check out Rugby League Project.

Following the recent round of the RLWC2021 Match Review Panel which took place on 13 November, the following sanction has been issued:

Our LeagueUnlimited volunteer writers assign 3-2-1 points after each match: