Returning to Panthers Stadium after running out of time against Cronulla last Sunday, Penrith will be intent on improving their application during the early stages of the match to ensure a late flurry of tries does more than make the final score line appear respectable.

Failing to capitalise upon an opportunity to join the Dragons and Warriors in the competition lead, coach Anthony Griffin will have his sights set on reminding his players of the disappointment felt throughout the playing ranks when they last faced off against Canterbury in Round 3, as another poor start proved to be a bridge too far for Penrith to overcome.

Forced to contend with a mounting injury toll that has left the club without the services of seven members of the top 30 for varying lengths of time, the Panthers have named the same squad that went down in Cronulla. However, based on a recent trend of selecting debutants as a means of widening the number of players boasting NRL experience should a similar run of injury misfortune befall the club later in the year, the likely candidate to make the progression into first grade appears to be Nick Lui-Toso, a 21-year-old prop who has been a part of the extended bench in recent weeks.

Holding a respectable record against the Bulldogs at the foot of the mountains with three wins from five matches contested at the venue since 2012, Friday's fixture will hold a milestone for captain Peter Wallace as he features in his 100th match for the club after making his debut in 2005, while specialist utility and stand-in five-eighth Tyrone Peachey will bring up a century of games in first grade having debuted with the Sharks in 2013. 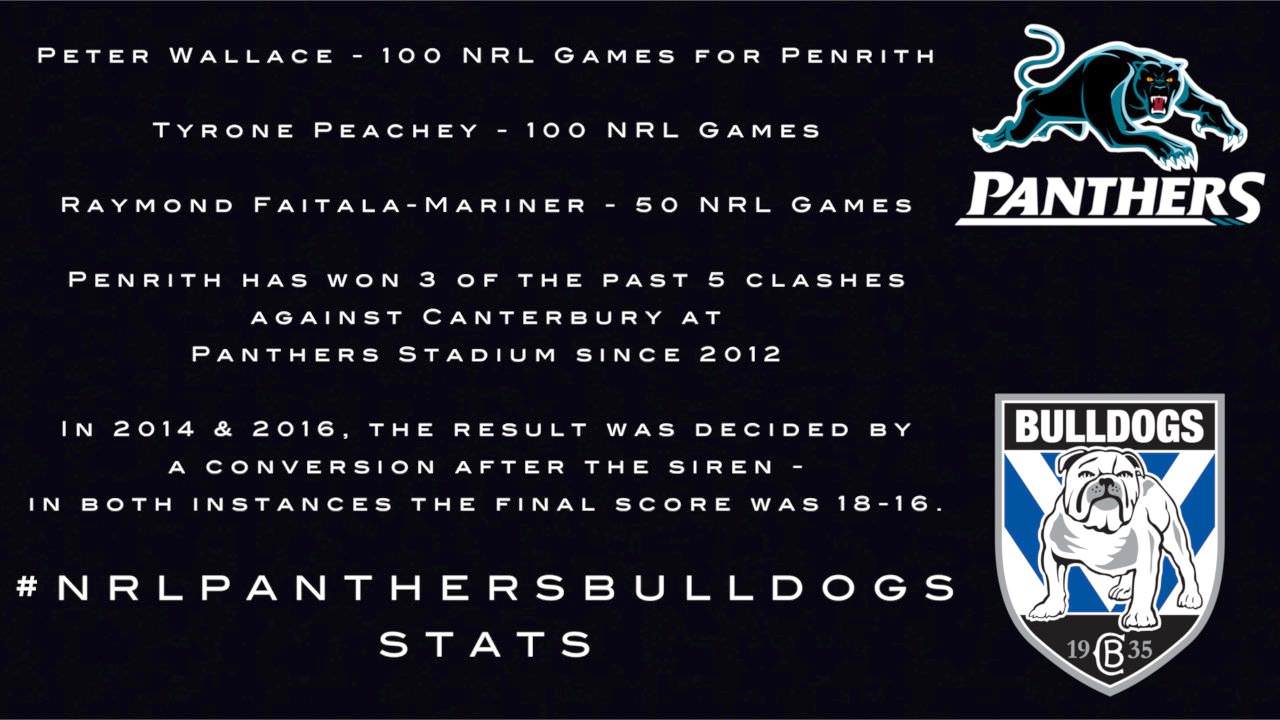 While their performance in attack drew considerable criticism against the Roosters, the defensive intent and overall enthusiasm from the Bulldogs suggests that despite the side's 14th placed standing being in direct contrast to their opponents, there are plenty of signs of promise throughout the club.

With the attacking deficiencies of the team being evident across every match they've contested in 2018, the improvements made in defence suggest that with a willingness to pass the ball and an increase in confidence that comes subsequently, the Bulldogs boast enough quality players to finish matches ahead on the scoreboard.

Sticking strong with the same 17 players used over the past three weeks to varying effect, one of the side's most improved performers Raymond Faitala-Mariner will celebrate his 50th appearance in the NRL, having linked with Canterbury from New Zealand midway through 2016.

Holding a 50% success rate against the Panthers in 12 matches contested since 2012, the Bulldogs have contested a number of memorable clashes against Penrith during this period, including two finals and a pair contests decided by sideline conversions after the full time siren resulting in the ecstasy of victory and the agony of defeat for both clubs at the venue.

Who to watch - Panthers: Enduring an injury-affected follow up to a breakout rookie season, Penrith forward James Fisher-Harris has leapt at the opportunity to return to the starting side, albeit in a new position.

Bursting onto the scene as the first debutant selected by Anthony Griffin in 2016, the 22-year-old has largely been known as an edge forward, but through various circumstances, the New Zealand international has thrived since shifting to the middle of the field with his on-field contributions gaining plenty of admirers.

Consistently improving his work rate with and without the ball, Fisher-Harris is one of many young players representative of the new Penrith era. Brought over from across the Tasman as a teenager, the development pathways in place through the Panthers lower grades has ensured that if a debutant has come through the systems at the foot of the mountains, that player is more than likely capable of making an impact in the NRL.

Set to pass the 50 game milestone in the coming weeks, Fisher-Harris looks set to be a long-term campaigner for the club capable of playing a leading role in big games.

Who to watch - Bulldogs: Having been forced to grow up in the shadow of an era defining player, the challenge of forging a career outside of his brother's legacy has shown plenty of promise for Bulldogs stand-off Jeremy Marshall-King over the opening two months of the season.

Experiencing a fortuitous ascension under Dean Pay, the 22-year-old was initially viewed as a depth utility granted a reprieve as part of the top 30 roster following the club's decision to release Moses Suli. Repaying the faith shown despite limited opportunities off the bench, the call to elevate the former Tigers reserve grader to the starting side has proven to be a sign of great potential for the Bulldogs heading towards the future.

While baring aspects in need of refinement that will only be improved with perseverance and increased composure in the top grade, Marshall-King looms as player yet to realise his full potential, but with the capacity to get the better of opponents with his willingness to complement the players around him.

The favourite: Sitting in third position and facing off against the side coming third last, the Panthers have been well supported to continue the Bulldogs troubles on the scoreboard.

My tip: With both sides coming into the Round 8 fixture with plenty to improve upon, the reality check handed to the home side last Sunday should spur them on to a committed and enterprising victory in front of a passionate sea of Black jerseys. Panthers by 16.