Josh Robertson looks at a near-perfect season from the Penrith club - which fell so cruelly short at the final hurdle.

With expectations of some improvement, Penrith left many people - including their fans - surprised, as they suffered just one defeat on their way to an NRL Grand Final berth in 2020. The Panthers had always been tipped as outside premiership contenders in recent years, but nobody was expecting the 2020 campaign to produce the success it delivered.

In my season preview, I wrote that the simple reason that Penrith wouldn't do well in 2020 is because they 'promise the world, but deliver an atlas'. Instead, this season could be the turning point of the Panthers with the belief around the club that they are genuine contenders.

The long lay-off had a different effect on each team. For the Panthers it was arguably the making of the 2020 side. They put aside much-publicised off-field drama and without a suspended Nathan Cleary had to quickly get back into the groove of things when it all resumed in late May. After blowing a lead against a heavily-depleted Knights side to survive a golden point draw, Penrith then began to find form - although it took them a while to adjust to the new six-again rule. They conceded the most and received the least 'six again' calls throughout the early part of the season restart.

A ten-minute period against Parramatta in Round 5 was the only downside of the regular season when the then-flying Eels came from behind and downed Penrith - the only loss of the regular season. From then on, the Panthers proved they were going to be no easy beats and began their title campaign in earnest.

For Penrith, a consistent run of form as fellow top sides slipped up saw them move into first spot, and ultimately secure the minor premiership with a game to spare following a 32-12 victory in Townsville in Round 19. It wasn't the ideal run-in, but the mountain men knew the finals would be a different kettle of fish after finishing the season with comfortable wins against bottom-three combatants Cowboys and Bulldogs.

The finals were a wake-up call for the Panthers as they quickly had to dig deep, the Roosters quickly racing out to a 10-0 lead in their Week 1 fixture. It was up to halfback Cleary to lead from the front and he did exactly that, running in a first half hat-trick. The minor premiers rushed out to a 28-10. lead but had to hold off a fast finish from the Roosters to win 29-28 and book a preliminary final berth.

South Sydney proved a strong challenge for the Panthers again in the prelim, having to come from behind again, but they did enough to make their first grand final since 2003.

Faced with the mammoth task of an experienced Grand Final outfit in the Melbourne Storm, the decider started well for the Panthers, but it was quickly evident that it was not going to be their night with a number of 50/50 calls going Melbourne's way, where incidents that looked like going Penrith's way ending up favouring the Storm. Ultimately Melbourne went to halftime 22-0 and extended that lead to 26-0 after the break.

In the end, experience in the big moments went against the Panthers as they had to try and pull off a miracle - which they fell just short of, meaning heartbreak for the minor premiers - and having to end a successful season without the ultimate trophy that they had so nearly earned. 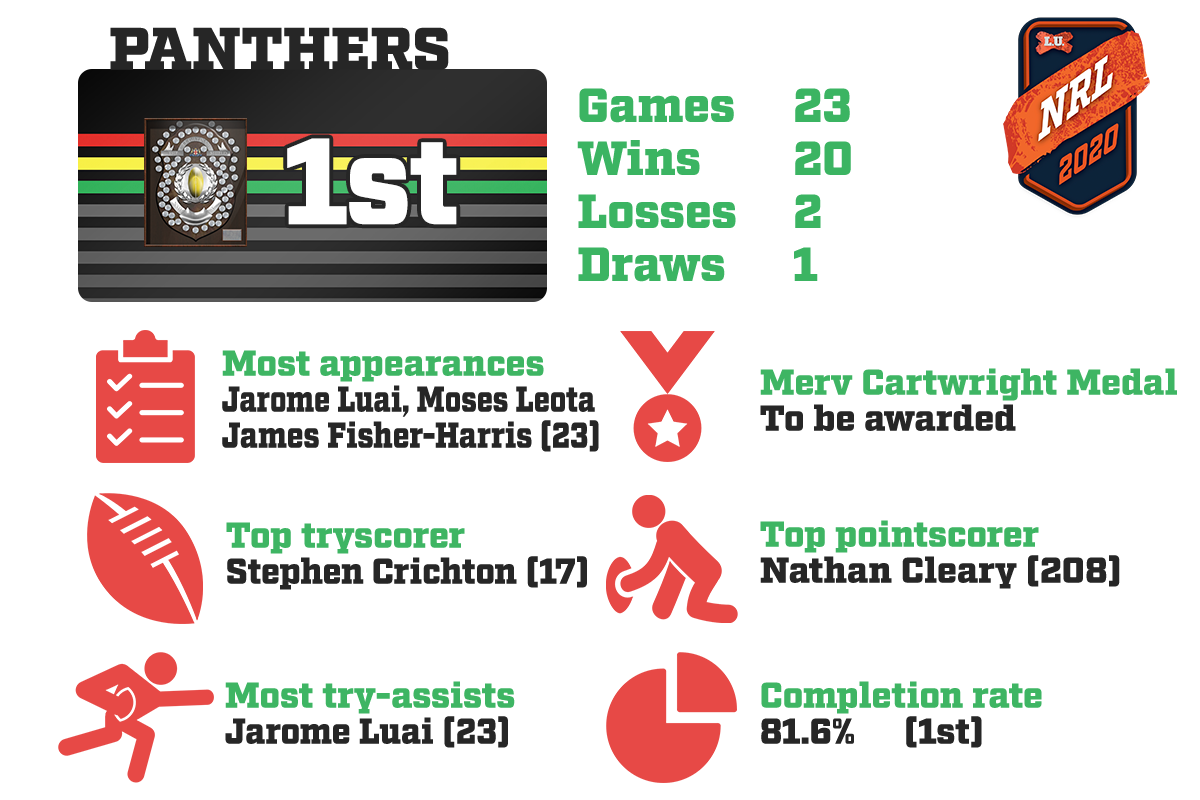 In a season where the Panthers were consistently at the top, the turning point of their season hinged on the COVID break after off-field dramas threatened to rock the Panthers season. Nathan Cleary's 'Tik Tok fun' very quickly threatened to derail the potential that the season had started brightly.

The Panthers blew victory against the Knights but then took a comfortable win over the Warriors. The return of Cleary was always going to be key to see what level the youngster had come back at, and he made amends for this, leading the Panthers throughout the season and being one for the best players in the competition in 2020.

It's too much of a cop out to say the whole team worked, but what worked best for the Panthers in 2020 was their halves pairing of Cleary and Jarome Luai. The question for the Panthers before Round 1 was always going to be whether Luai or Matt Burton would partner Cleary.

There isn't too much to say that didn't really work for the Panthers in 2020 and to find something that didn't work would be nit-picking a 10-fold improvement on 2019.

If there was something that didn't work for the Panthers it would be their consistency across a full 80 minutes. The top teams need to play for a full 80 but the Panthers had stages where they would create large amounts of opportunities but not take them only to then have to sustain pressure on their own lines. This was shown particularly in the first week of the finals where the Panthers had to come from behind against the Roosters - and then at the tail end of the game hold them out as they steamed home.

Nathan Cleary was considered to be one of the best players across the NRL in 2020 and that was a key part to the Panthers season along with his halves partner Jarome Luai. Outside of Cleary and Luai it was hard to pick anyone who didn't have a good season for the Panthers.

Boom rookie Stephen Crichton was one of the strong performers who initially started the season on the bench before injury to Dean Whare saw Crichton lock in the centre spot.

The other player who was one of the Panthers' best this season was Isaah Yeo who despite not having the flashiest game, Yeo's tenacity and perseverance was yet again strong for the Panthers.

Every season the Panthers produce a star rookie and that was no different in 2020 for the Panthers and it was the Forbes Flyer Charlie Staines who left everyone talking after his debut where he put four tries on the board against the Sharks.

Staines only managed the two games with forced quarantine after a COVID breach and then injury curtailed his second NRL game against the Sea Eagles where again he put on two tries. Penrith also blooded Tigers-bound (in 2022) Daine Laurie. The biggest name of the Panthers' rookies this season was Stephen Crichton who's blistering season saw him 17 tries in 22 games after only appearing a handful of times last season.

The Panthers will have big expectations on them for 2021 after their exploits in 2020, with the question can they match the levels of performance they delivered this year. Having kept the majority of the squad the same, the loss of James Tamou will be a blow but there is enough quality to stand-up and remain a contender.

Penrith have also lost wild child Jack Hetherington, who has gone to the Bulldogs, although he missed a chunk of the middle of the year through both suspension and a Warriors loan deal. There are no excuses for 2020 to be a one-off for the Panthers though, with the groundwork for their performances evident, the attitude that they have will be important with teams coming for them in 2021.

Based on current signings, this is how I expect the Penrith side to line up next season: