Josh Robertson wraps up our 2021 season review series, with a look at 2nd place and premiers Penrith.

Back in 2020, in my season preview for this club, I said "Penrith are a club who promise the world every year, but usually deliver an atlas" - and when I went on to preview the 2021 season pointed out that they "almost delivered the world in 2020".

But boy, in 2021 they delivered not just the world to Penrith - they might as well have delivered the whole universe.

So many people in 2020 said that the Panthers were "lucky" last season with rule changes favouring them and circumstances of the draw, but in 2021 the Panthers put paid to the critics who claimed them to be 'one-year wonders', as they took home the 2021 NRL Premiership.

Their began season in style, with back-to-back victories over the Cowboys and Bulldogs - remarkably becoming the first team to keep their opponents scoreless across the opening fortnight of any NRL season. A massive test came for the Panthers in Round 3 when they had to take on the Melbourne Storm minus halfback Nathan Cleary who was concussed the previous week against the Bulldogs following a high shot from former teammate Dallin Watene-Zelezniak.

If there were questions over the Panthers in 2021 they were well and truly answered when they managed to steal the lead from Melbourne in the dying minutes of that Round 3 game through Kurt Capewell's try, converted by Stephen Crichton for a euphoric victory. The biggest play of the regular season for the Panthers came in the final moments of that contest, when Viliame Kikau picked himself up off the canvas to get his hand under the ball after it looked certain that Justin Olam was going to score.

Penrith roll continued through to the season until a threat not seen during the 2020 season came up to potentially derail the Panthers success - the State of Origin period. The club were expected to be heavily decimated and they were, missing 8 key players from their squad against a Tigers side which was near-full-strength - as a result, the Panthers were never given a chance and fell to their first defeat of the season.

Back-to-back defeats left the side vulnerable after Origin stars were rested from the clash with Cronulla just 48 hours after Game I. The Panthers were then left further vulnerable after Game II, when Blues half Nathan Cleary suffered a significant shoulder injury that left Penrith in a dire position.

Ultimately though, the injury to Cleary on its own didn't derail the season too much - but then just a week later, injury to Jarome Luai left Penrith in a deep hole. Missing both their key halves, questions were asked once poor performances began to arise through the second half of the season.

But - as a champion team often does, they silenced the doubters. Only losing one more game in the regular season, Penrith went on to finish second, losing out in the race to the minor premiership on for and against to a Melbourne side who continually racked up the points. That one loss in the back-end of the season came against the Storm in a game where kickoff was delayed by 24 hours due to a snap lockdown, and on an afternoon where Melbourne welcomed back a number of stars while Penrith were without captain Isaah Yeo, Cleary and Brian To'o among others.

Heading into the finals, the Panthers weren't at their 100% peak, with both Luai and Cleary still hampered by injury. The finals series was sort of an anomaly for the Panthers season, as their attack went missing during the finals and the games were won solely on the season's best defence.

After a less than impressive performance in the opening week of the finals against Souths, many pundits said that the Panthers were gone because they had to take the long road to the finals, but the belief of players continued that pattern of silencing the doubters.

Defence won the day against the Eels when it looked almost certain that Parramatta would get past them, and then against Melbourne, the side was given no chance - but again a good start and strong defence put the mountain men in good position - and delivered them a grand final berth.

A week later, Penrith finally delivered on what they had promised for so many years since 2003, by bringing the Provan-Summons trophy back to the foot of the mountains, with their victory in the Grand Final getting revenge over Souths for the first week finals loss. 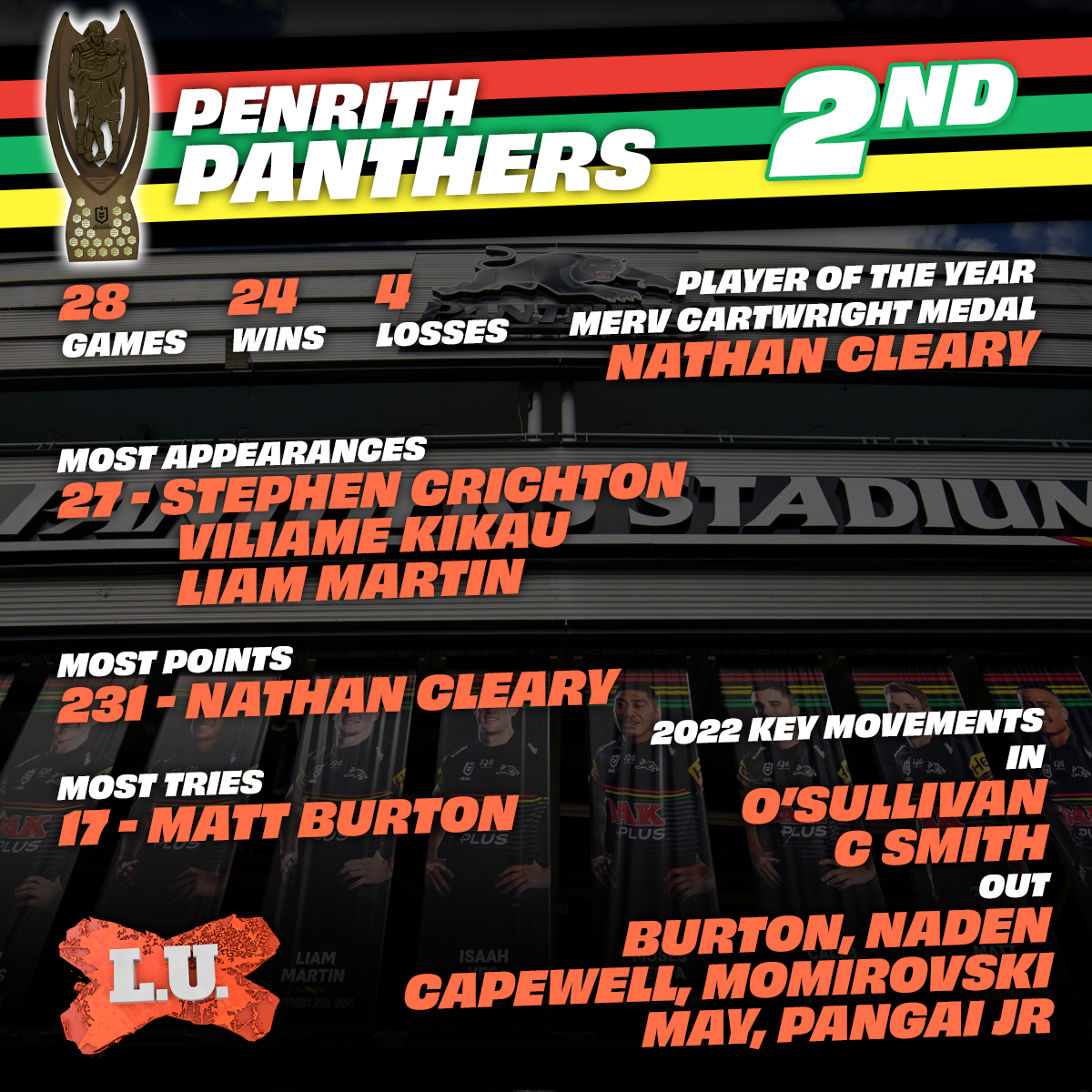 It's hard to find a turning point in the season, because Penrith have been consistently good across the past two seasons, but State of Origin became a big turning point, with things having looked cruisy for the most part across the first two months of 2021.

Arguably, the Panthers were the hardest done-by during the schedule, with their opponent prior to Origin I being unaffected by representation and therefore close to full strength. It showed that a previously invincible team had quite a few chinks in the armour, and a potential lack of depth in the halves.

The other biggest turning point would undoubtedly be the finals - specifically after the first week defeat to the Rabbitohs. Many people had written off the side by this point, and they needed to be a strong performance to go through what was set to be one of the hardest finals paths in recent memory, including facing an in-form Melbourne in the preliminary final.

Then of course there's Cody Walker's fateful pass in the final 10 minutes of the decider. I'll let the footage do the talking:

The team was just that - they were a team and not 13 individuals on a field. The connection that every player who came into the side showed to take up their role instantly - or even if someone was having a bad day then someone else stepped up. It was a special season.

Simply put... Tyrone May. The decision to play May in the halves by Ivan Cleary was one of bemusement, because there are some strong up and coming players in the team and May was often a handbrake on the Panthers attack in 2021.

Playing May at halfback brought a stagnation in Penrith's attack when things weren't working, whilst Nathan Cleary was out. Having barely played in the halves, a number of poor performances from May, who was dumped by the club after the season ended, slowed the Panthers performances and to bring him back to the halves after a clear failure initially, was questionable.

Speaking from a biased perspective, it is hard to find a player to single out as the best of the season, despite Nathan Cleary being the Clive Churchill Medal winner and picking up the Merv Cartwright Medal just this week. That said, it's easy to say that nearly everybody in the Panthers side could've won that award.

The work of Dylan Edwards at fullback is very underestimated and lays a platform, fan favourite Brian To'o with his huge metre gains from the back of the field along with Stephen Crichton. The no-nonsense play of James Fisher Harris and Isaah Yeo just to get the attack going forward and settling it down when things need to be calm.

Another player that deserves a mention is Scott Sorensen, a player that I've felt that was underused at his previous clubs. Coming into the Panthers' squad, "Hot Scott" as he's been dubbed by the Panthers fans, made his impact off the bench and helped the Panthers during the season phenomenally.

Of course it's hard not to mention Jarome Luai, the little master who came into the Panthers team as a rookie many years ago and instantly lead the team around and still does along with Nathan Cleary.

Penrith yet again have had to blood plenty of rookies and one player that impressed coming into the side was J'maine Hopgood. Watching lower grades regularly, I've had huge wraps on Hopgood for a very long time. The no nonsense back-rower will be a key part of the squad going forward and picked up some amazing experience this season, particularly when the side's depth was tested mid-year.

Izack Tago is another player of the future who can take the leap to a regular first grade role, after getting his opportunity during the middle of the season both starting and coming off the bench.